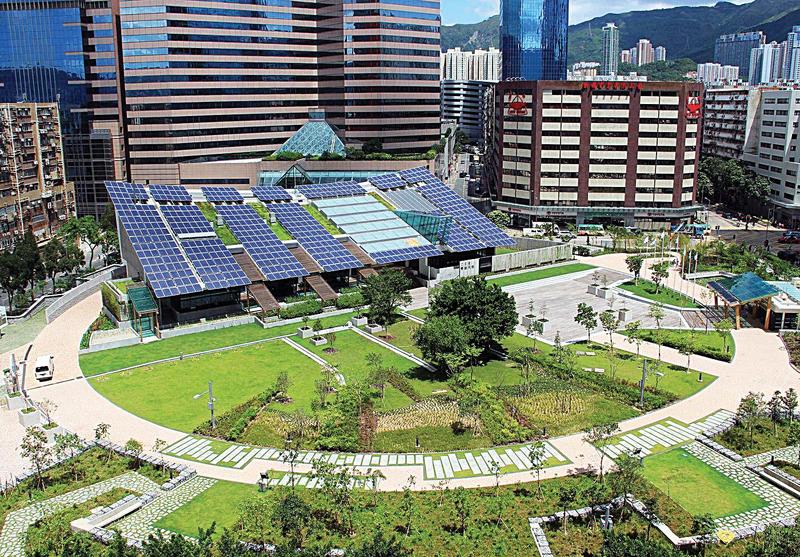 Large-scale photovoltaic panels are installed on the roof of Zero Carbon Park’s main building for the conversion of thermal energy into electricity. The panels enable the park to generate electricity on-site. (PHOTO PROVIDED TO CHINA DAILY)

Walking into Zero Carbon Park, located in Kowloon Bay, you will find a “city oasis” that’s home to hundreds of varieties of flowers and trees. The setting stands in deep contrast to Hong Kong’s hectic urban life with the park’s spaciousness and greenery.

Opened a decade ago, Zero Carbon Park, developed by the Construction Industry Council in collaboration with the Hong Kong Special Administrative Region government, is Hong Kong’s first zero-carbon building. It acts as a test-bed for low-carbon construction design and technologies, as well as a green urban community space, breathing new life and clean air into the city.

If we could save two percent, which is a humble figure, of the total energy used by existing buildings, it would be far more than the energy saved by new buildings.

“We’re almost self-sufficient in energy. We generate our own power and we don’t need external power. And when there’s a surplus, we feed it back into the local grid,” says Paul Chong Kin-lit, chairman of Zero Carbon Park.

Designed to be energy-positive in its life cycle, the park uses low-carbon materials and adopts a passive building design to reduce energy demand in construction and operation, and generates on-site renewable energy from solar panels and waste cooking oil to offset carbon emissions from construction and materials.

The building’s passive design takes advantage of natural resources, such as energy from the sun and breezes, to minimize the need for additional lighting, cooling and heating. For instance, a “wind catcher”, resembling a small chimney, is fitted to the roof at the center of the building to trap the wind, using the air to cool the building.

According to the park’s operator, the passive design could save up to 20 percent in energy costs, compared with a similar building of non-passive design.

Waste cooking oil, collected from catering premises, that otherwise would have ended up in landfills is also utilized by the park through its biodiesel tri-generation system to produce electricity and heat for cooling the desiccant dehumidification.

“We don’t waste energy here,” says Chong, adding that the energy needed for the park’s operation has been minimized. “It’s just sufficient to keep those in the building, as well as visitors, comfortable. We don’t do unnecessary things for them to function.”

He hopes the park can promote low-carbon living ideas and technologies within the community. “We don’t expect them to be applied immediately. But slowly, year by year, we’ll see progress. It’s not an option, but a must. You have to consider green from the beginning.” 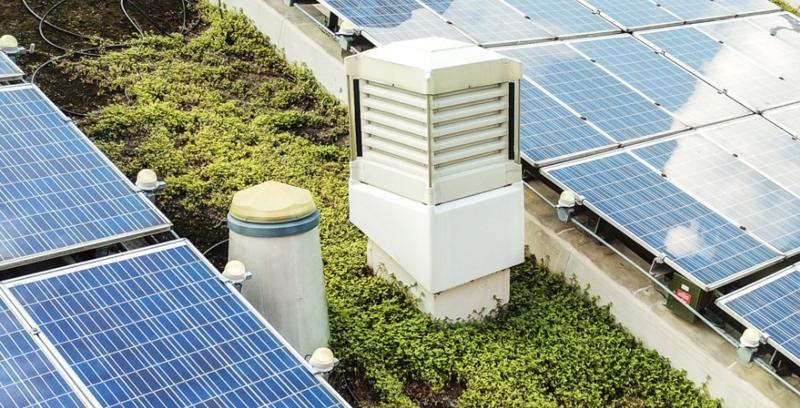 A wind catcher on the roof of a building in Zero Carbon Park harnesses breezes and redirects them downwards to cool the building. (PHOTO PROVIDED TO CHINA DAILY)

“We’re unlikely to see a building with no carbon emissions at all,” says Ivan Fu Chin-shing, director and architect at Hong Kong-based architectural and design company LWK + Partners. Constructing and operating such buildings inevitably produces greenhouse gases, he says.

“The shift to net-zero in construction doesn’t mean we can stop carbon emissions altogether. It only means we can cut down emissions as much as possible and offset what’s left,” explains Fu.

Carbon emissions from building construction come mainly from embodied carbon which is associated with materials and a building’s construction, such as material extraction, manufacturing, transport and construction; as well as from operational carbon, which is emitted from lighting, ventilation and air-conditioning.

Buildings worldwide account for 39 percent of all carbon emissions, with 28 percent of the global total being operational emissions and 11 percent being from materials and construction, according to the World Green Building Council, an international non-governmental organization which aims to decarbonize the building industry by 2050.

“The Hong Kong government should do more to prod buildings into using less electricity during the operational stage. They’re talking more about the construction stage,” says Chong. This is due to complexity in creating methods for existing buildings to measure the effectiveness of ways to cut carbon emissions. The government, he says, should bite the bullet in making old buildings greener.

By the end of 2019, there were 35,700 private residential buildings in Hong Kong — with about 60 percent of them more than 30 years old, including some 7,000 exceeding 50 years of age — according to the Home Affairs Department. “If we could save two percent, which is a humble figure, of the total energy used by existing buildings, it would be far more than the energy saved by new buildings,” says Chong.

Fu says carbon emissions in existing buildings can be reduced through retro-commissioning — a process to routinely check a building’s operations, such as energy efficiency and equipment conditions, to help it perform well over time, often using more recent technologies.

“You can imagine a building aged 70 years normally will have problems, such as old wiring which consumes more electricity. We can upgrade the electrical system with more energy-efficient products like LED (light emitting diode) lamps. We can also upgrade its elevator algorithm for it to consume zero energy when it’s not running,” he said.

“There’s still something you can do about the window you are using, such as its area and the heat-resistant factor — to enable you to use less air-conditioning,” he adds. “Today, we have glasses with solar panels integrated into them, so your window itself can be a PV (photovoltaic) panel. It may not be as efficient as a traditional panel, but you can still produce some electricity.”

The average incremental costs of developing green projects for residential use, compared with conventional buildings, range from 23.9 yuan ($3.54) to 131.8 yuan per square meter, according to a survey conducted by the Chinese Society for Urban Studies, which reviewed 148 green projects on the Chinese mainland in 2017.

Chong says Hong Kong should incentivize the market by offering “bonus” floor areas to developers. “When you’re green and can achieve certain ratings, you should get some extra floor areas. A ‘bonus’ floor area can be valuable and used to offset higher construction costs.”

“Developers are very straightforward. If they see benefits, they’ll do it proactively,” says Fu, urging the government to offer more green finance incentives. “Otherwise, we would be building castles in the air as neither the public nor small and medium-sized enterprises have the capacity or capital to promote the technology to achieve carbon neutrality.”

He suggests that policymakers take the lead in purchasing and using low-carbon projects which are often costlier than conventional ones. “They don’t have to take care of every bill, just get the ball rolling.”

He expects to see a sustainable low-carbon construction industry by 2035 as the economy shifts toward carbon neutrality. “By that time, you could access more green capital or low-cost capital through ESG ratings. The capital pool will not only be provided by the government. It will benefit developers, constructors, subcontractors, material suppliers and even consultants — forming a virtuous circle.”

Fu believes Hong Kong could be a pathfinder in low-carbon development for the nation, testing the water and building up the initial framework. “The practices can then be amplified and improved on the mainland, especially in the Guangdong-Hong Kong-Macao Greater Bay Area.”