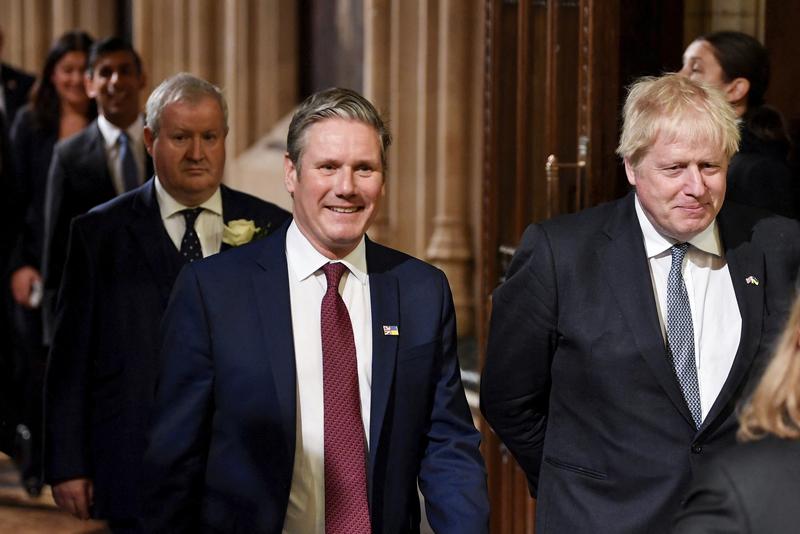 Britain's Prime Minister Boris Johnson (right) and British Labour Party opposition leader Keir Starmer proceed through the Members' Lobby for the State Opening of Parliament at the Palace of Westminster in London, May 10, 2022. (TOBY MELVILLE / POOL VIA AP)

LONDON - British Prime Minister Boris Johnson's government on Tuesday set out more than 30 new bills at a state ceremony to mark the opening of a new session of the parliament.

Seven of the proposed bills to be put before lawmakers address economic and social life in Britain in the wake of the country's departure from the European Union.

The proposed bills were outlined in a speech given by the heir to the British throne, Prince Charles, on behalf his mother the Queen.

Prince Charles outlined government proposals to protect the integrity of the Britain's borders, by preventing dangerous and illegal crossings of the English Channel, and tackling criminal gangs who profit from cross-Channel journeys by asylum seekers

Queen Elizabeth II, now 96, missed the event for the first time in 59 years due to mobility problems.

"The government will continue to seize the opportunities of the United Kingdom's departure from the European Union, to support economic growth," Charles told Members of Parliament (MPs), adding that regulations on businesses will be "repealed and reformed."

The proposed Brexit Freedoms Bill would allow for laws inherited from the EU to be more easily amended.

He also outlined government proposals to protect the integrity of the Britain's borders, by preventing dangerous and illegal crossings of the English Channel, and tackling criminal gangs who profit from cross-Channel journeys by asylum seekers.

The proposed bills would also see the government supporting the Bank of England in returning inflation to its target. Another bill is aimed at driving local growth, while the planning system will also be reformed to give residents more involvement in local development projects.

Transport services will also be improved, there will be education reforms, and a new mental health act.

In the debate following the ceremony, Boris Johnson told MPs: "Just as we got Brexit done, so with this Queen's Speech we finish the job of unleashing the benefits of Brexit to grow our economy and cut the cost of living.

The Brexit freedoms Bill would put the interests of British business and British families first, he said.

He added: "As we come to the halfway point of this Parliament, this country has seen off the biggest challenge that any post-war government has faced, but the cost of the pandemic has been huge, with the biggest fall in output for 300 years, which necessitated government expenditure of 400 billion pounds ($492 billion)."

Aftershocks are still being felt across the world, he said, with a global spike in food and energy prices. However, Johnson emphasized:  "We had the fastest economic growth in the G7 last year."

ALSO READ: UK PM to be probed over 'Partygate'

Keir Starmer, leader of the opposition Labour Party, said during the debate: "We can do more than just get Brexit done; we can ensure that Britain is in the best position to thrive outside the European Union, and we can lead the world in zero-carbon industries, generating high-skilled, high-wage jobs across the country. "

However, Starmer added: "For that to happen, we need a government of the moment with the ideas that meet the aspirations of the British public. This thin address, bereft of ideas or purpose and without a guiding principle or a road map for delivery, shows just how far the Government is from that."