By William Xu in Shenzhen and Oasis Hu in Hong Kong 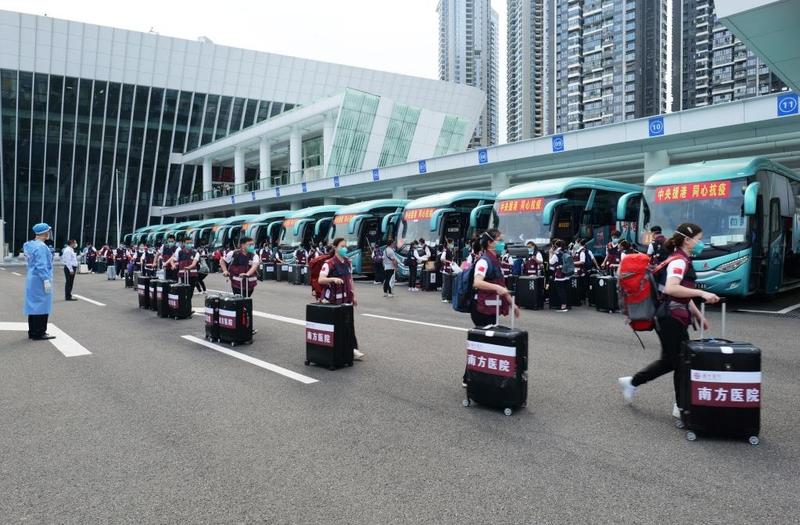 A team of 300 Chinese mainland medical workers gets ready to depart from Liantang Port in Shenzhen, South China's Guangdong province, for Hong Kong to help with the fight against the COVID-19 epidemic, March 16, 2022. (PHOTO/XINHUA)

Hong Kong society has expressed heartfelt gratitude to hundreds of Chinese mainland medical workers, who have treated numerous vulnerable COVID-19 patients in the city for over a month and helped it successfully contain the pandemic.

In a social media post on Wednesday, Chief Executive Carrie Lam Cheng Yuet-ngor said that as the pandemic situation has eased, she believes the workers will soon begin to return to the mainland in batches.

Chief Executive Carrie Lam Cheng Yuet-ngor expressed much appreciation to mainland medical workers, noting that they have worked closely with their Hong Kong counterparts to care for COVID-19 patients at the community treatment facility in AsiaWorld-Expo over the past month

She expressed much appreciation to them, noting that they have worked closely with their Hong Kong counterparts to care for COVID-19 patients at the community treatment facility in AsiaWorld-Expo over the past month.

Patients admitted to this facility are predominantly elderly and most have underlying medical conditions. Mainland medical staff working at the facility were deployed here to help those suffering from severe COVID-19 symptoms.

Lam said that the operation showed that whether medical workers are trained locally or overseas, as long as they come from accredited medical schools and have a professional attitude, they can serve patients well.

This is also the reason she has actively brought forward the introduction of nonlocal doctors to address the city’s acute shortage of medical workers, she added. 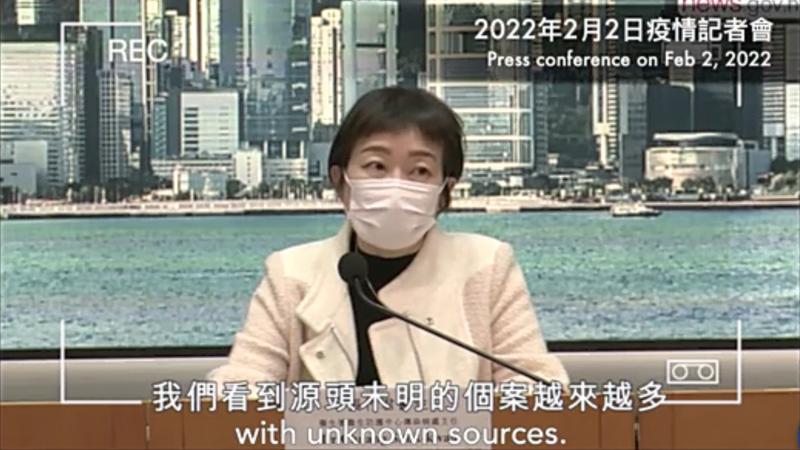 At the request of the Hong Kong Special Administrative Region government, about 400 mainland medical workers arrived in the city in mid-March to help in its anti-pandemic fight. They have all had experience treating COVID19 patients, and many of them are fluent in Cantonese and English, the two widely spoken languages in Hong Kong.

The number of Hong Kong’s daily infections has fallen from over 70,000 in early March, to fewer than 1,000 in the past two weeks. As of April 17, the mainland medical team had treated 822 confirmed cases, 780 of whom have been discharged. 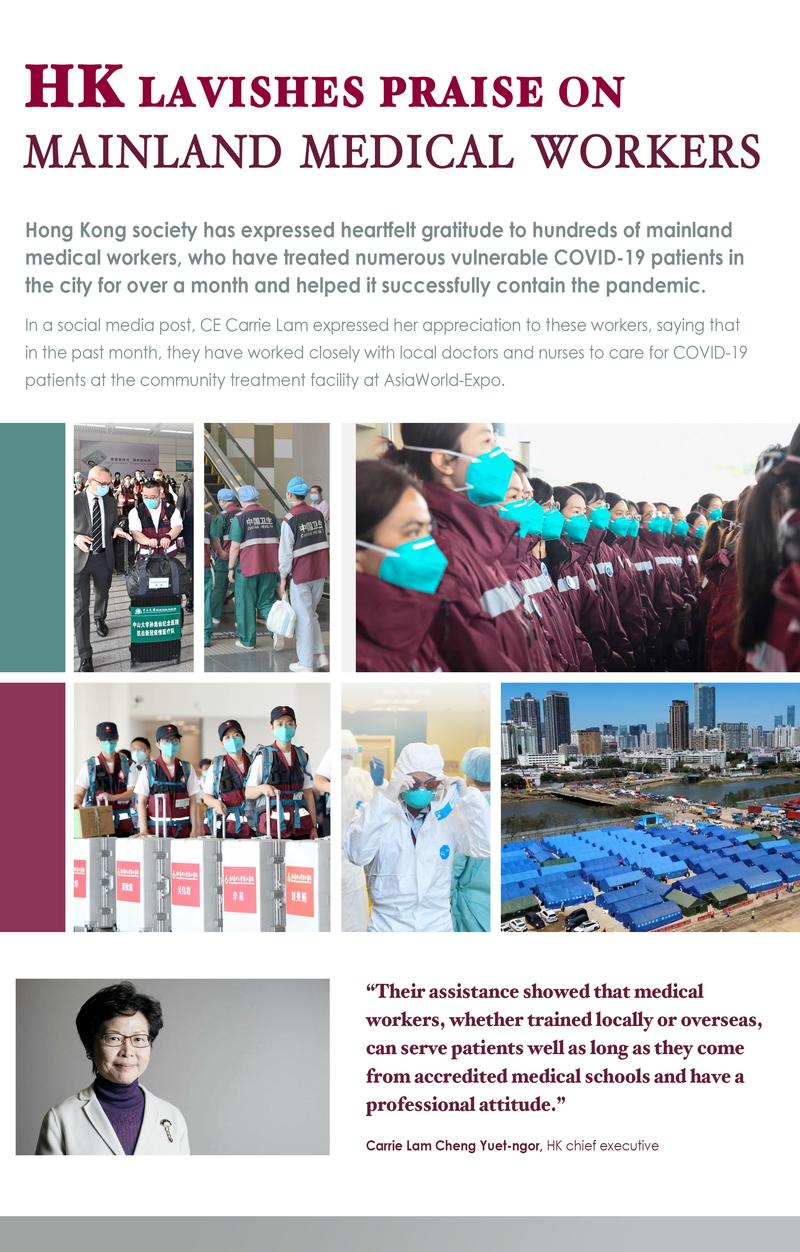 In an earlier interview, lawmaker Kenneth Leung Yuk-wai said that the central government had been careful and thoughtful in its support of Hong Kong, as most of the experts it sent to the city come from Guangdong province, speak Cantonese and know the city’s customs and culture.

Hong Kong Land Transport Council chairman Stanley Chiang Chi-wai said he is very grateful for the support of the mainland medical workers, adding that their assistance demonstrated the central government’s care and concern for Hong Kong people. As the pandemic has stabilized, Chiang suggested the government use some community treatment facilities to cope with the rising demand to accommodate and isolate overseas arrivals.

Chong Yutian, leader of the mainland medical support team, said that Hong Kong and mainland medical experts have worked closely in isolation facilities. They shared the experience and learned a lot from each other, which helped infected patients recover quickly.

He stressed that if Hong Kong needs the mainland’s medical help again, they would be better prepared and respond quicker.