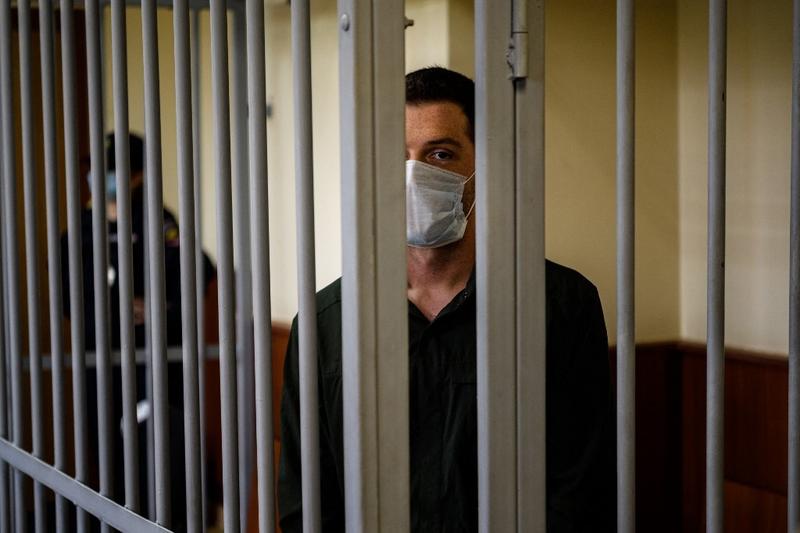 In this file photo taken on July 30, 2020 US ex-marine Trevor Reed, charged with attacking police, stands inside a defendants' cage during his verdict hearing at Moscow's Golovinsky district court. Moscow said on April 27, 2022 it has exchanged former US marine Trevor Reed, jailed in Russia for assaulting police, for Russian pilot Konstantin Yaroshenko, who was convicted of drug smuggling in the United States. (DIMITA DILKOFF / AFP)

WASHINGTON - The United States and Russia swapped prisoners on Wednesday amid their most tense relations in decades over the war in Ukraine, with former US  Marine Trevor Reed released in exchange for Russian pilot Konstantin Yaroshenko.

The swap was not part of broader diplomatic talks and did not represent an American change in approach on Ukraine, US officials said. Russian-American ties have been at their worst since the Cold War era following Russian special military operation in Ukraine and subsequent Western sanctions imposed on Moscow.

Trevor Reed, from Texas, was expected to arrive back in the United States on Wednesday night, State Department spokesperson Ned Price said

Reed, from Texas, was expected to arrive back in the United States on Wednesday night, State Department spokesperson Ned Price said. Senior US officials said the 30-year-old was in "good spirits."

"Today, we welcome home Trevor Reed and celebrate his return to the family that missed him dearly," President Joe Biden said in a statement, noting the parents' concerns about their son's health.

"The negotiations that allowed us to bring Trevor home required difficult decisions that I do not take lightly," Biden added.

Asked later on Wednesday how he was able to raise the issue of Reed's detention amid the broader tensions with Russia over Ukraine, Biden said, "I did it. I raised it. I raised it three months ago."

Reed was convicted in Russia in 2019 of endangering the lives of two police officers while drunk on a visit to Moscow.

US officials said Biden commuted the sentence of Yaroshenko, a Russian pilot who was arrested by American special forces in Liberia in 2010 and convicted for conspiracy to smuggle cocaine into the United States. Russia had proposed a prisoner swap for Yaroshenko in July 2019 in exchange for the release of any American.

ALSO READ: UN chief to visit Turkey before having talks in Russia, Ukraine

The swap occurred in Turkey, and the United States thanked Turkey, a NATO ally, for its help in the exchange. Russian news agencies reported that Yaroshenko then flew from Ankara to Sochi and finally to Moscow.

Biden and Secretary of State Antony Blinken said they were working to free another American held in Russia, Paul Whelan, also a former Marine.

Joey and Paula Reed, the parents of Trevor Reed, thanked Biden and others, saying in a statement that the "president's action may have saved Trevor's life."

His father, Joey, later told reporters that they had two phone calls with their son on Wednesday.

"It didn't sound like him (in the first call). The second call, he sounded more like himself. He must've gotten some fluids and food in him. He was cracking jokes," Joey Reed said.

Russian state television video, played on CNN, showed Reed, appearing thin and wearing a dark overcoat, being supported on both sides by men wearing camouflage. Russia state media described the video as showing Reed at an airport in Russia.

"The American plane pulled up next to the Russian plane, and they walked both prisoners like you see in the movies," Joey Reed told CNN.

Biden met with Joey and Paula Reed on March 30. The following week, the parents said that a prisoner swap seemed to be the only way to bring Reed home and urged the White House to take all possible steps.