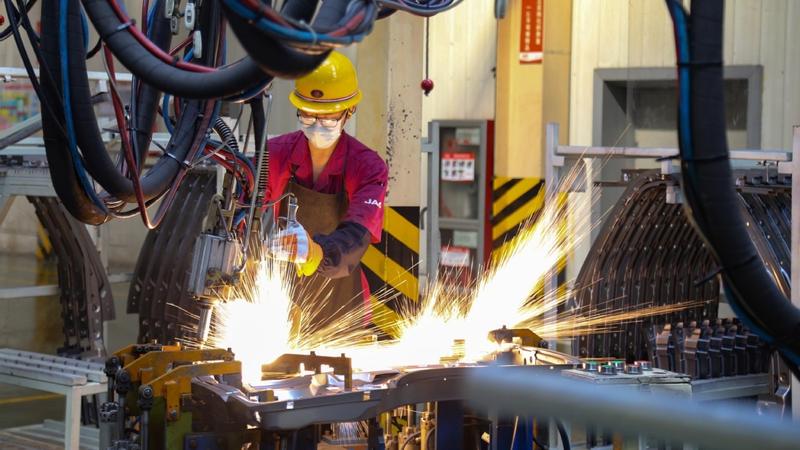 A worker is seen at an auto factory in Qingzhou, Shandong province on Sept 13, 2021. (PHOTO / XINHUA)

BEIJING - China's economy got off to a steady start in the first quarter of 2022 despite an increasingly complex international environment and resurgences of COVID-19 cases at home.

The country's gross domestic product grew 4.8 percent year on year to 27.02 trillion yuan (about $4.24 trillion) in the first three months, picking up pace from a 4-percent increase in the fourth quarter last year, data from the National Bureau of Statistics (NBS) showed Monday.

The economy posted a stable performance with continued recovery as China struck a balance between epidemic control and economic and social development, NBS spokesperson Fu Linghui told a press conference.

After a strong rebound in 2021, China witnessed some unexpected challenges at the beginning of this year, with a volatile global situation and multiple sporadic COVID-19 outbreaks on the domestic front. The downward economic pressure is on the rise and some major indicators have seen slower increases, according to Fu.

"But the long-term economic fundamentals remain sound and the continued momentum of economic recovery has not changed," Fu said, emphasizing that the country is confident and capable of overcoming these difficulties.

The country's industrial production reported faster growth in the first quarter of the year, with stellar performance highlighted by the high-tech manufacturing sector, official data showed.

China's value-added industrial output, an important economic indicator, went up 6.5 percent year-on-year in the first three months, according to data.

During the January-March period, mining output recorded year-on-year growth of 10.7 percent, the fastest among the three major industrial sectors.

The output of the manufacturing sector increased 6.2 percent, while the production and supply of electricity, heat, gas and water rose 6.1 percent, according to the NBS.

The high-tech manufacturing and equipment manufacturing industries saw marked growth by expanding 14.2 percent and 8.1 percent, respectively, both higher than the Q1 industrial output.

In terms of production, the output of new energy vehicles logged a marked increase of 140.8 percent, while that of solar batteries and industrial robots jumped 24.3 percent and 10.2 percent year on year, respectively.In a breakdown by ownership, the output of state-owned enterprises rose 5 percent from a year earlier, while the private sector's output increased 7.6 percent.

The country's retail sales of consumer goods, a major indicator of the country's consumption strength, went up 3.3 percent year-on-year in the first quarter (Q1) of this year, official data showed.

The country's retail sales of consumer goods totaled around 10.87 trillion yuan (about $1.7 trillion) during this period, according to the NBS.

In Q1, retail sales of goods rose 3.6 percent from a year ago to 9.8 trillion yuan, while catering revenue hit 1.07 trillion yuan, an increase of 0.5 percent year-on-year.

Online consumption remained a bright spot, with online retail sales rising 6.6 percent year on year to reach about 3.01 trillion yuan in this period..

Fixed-asset investment jumped 9.3 percent from a year earlier to 10.49 trillion yuan (about $1.65 trillion) in the first three months, the NBS said in a statement.

The growth slowed from a 12.2-percent increase registered in the first two months. In March, fixed-asset investment increased 0.61 percent from a month earlier.

In Q1, fixed-asset investment from the private sector increased 8.4 percent from a year earlier to 5.96 trillion yuan, accounting for more than half of the total.

Investment has traditionally been a key engine for growth. In the first two months of this year, China's fixed-asset investment saw a rapid recovery, with manufacturing and infrastructure investment leading the upward momentum.

The figure edged up 0.1 percentage points from the same period last year, according to data from the NBS.

A total of 2.85 million new urban jobs were created during the period, according to the NBS. While the complex global situation and sporadic domestic COVID-19 resurgences weighed on employment, China's job market has remained generally stable since the beginning of this year thanks to its employment-first policy and ever-increasing support for struggling businesses, said Fu.

Chinese authorities have pledged measures to channel more unemployment insurance funds to underpin employment and training, and provide job seekers with no fewer than 1 million internship openings this year.

In March, China's surveyed urban unemployment rate was 5.8 percent, up 0.3 percentage points from February, while the rate among those aged between 25 and 59, the majority of the labor market, stood at 5.2 percent.

China's investment in property development rose 0.7 percent year on year in the first quarter of 2022, data from the NBS showed.

During the period, property investment stood at around 2.78 trillion yuan (about $435.44 billion). Investment in residential buildings went up 0.7 percent year on year to about 2.08 trillion yuan in the January-March period.

During the period, commercial housing sales dropped 13.8 percent year on year in terms of floor area to 310.46 million square meters.

In terms of value, commercial housing sales went down 22.7 percent to around 2.97 trillion yuan.

China has reiterated its stance of "housing is for living in, not for speculation," vowing to keep land prices, housing prices and market expectations stable and adopt city-specific measures to facilitate positive circulation and sound development in the real estate sector.