Russia says to continue operation in Ukraine until goals achieved 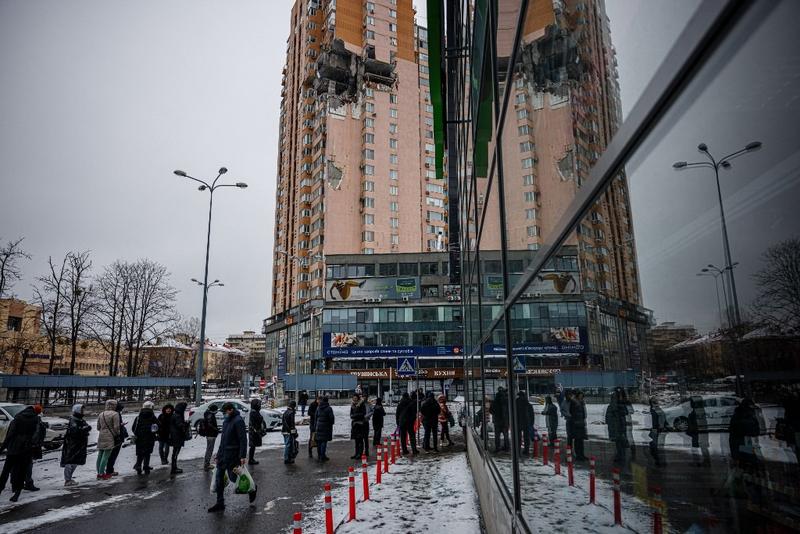 People wait in line to buy food in front of a supermarket with a damaged building in the background in Kyiv on March 1, 2022. (DIMITAR DILKOFF / AFP)

"The main thing for us is to protect Russia from the military threat posed by Western countries that are trying to use the Ukrainian people in the fight against our country," Shoigu said during a video conference with top defense officials.

The Russian military is not occupying Ukrainian territory and is taking all measures to preserve the lives and safety of civilians, he reiterated.

"I would like to stress that the strikes are carried out only against military targets and exclusively with high-precision weapons," Shoigu said.

On Tuesday, a massive airstrike conducted by Russian forces hit the center of Ukraine's second-largest city Kharkiv, the State Service for Emergencies said.

According to the agency, Russian rockets struck residential areas and buildings of the regional state administration.

On Monday, Russian troops shelled residential areas on the outskirts of Kharkiv, killing at least 11 civilians, according to Ukrainian authorities. Ukrainian President Volodymyr Zelensky called the shelling a "war crime."

Russia launched a "special military operation" against Ukraine on Feb 24.

Among them were 43 control points and communication centers of the Ukrainian Armed Forces, Konashenkov told a regular briefing on Russia's "special military operation."

In addition, 395 tanks and other armored combat vehicles, 59 multiple launch rocket systems, 179 field artillery guns and mortars as well as 286 units of special military vehicles were destroyed, he added.

The access of Ukrainian troops to the Sea of Azov has been completely blocked, Konashenkov told reporters.

He said that Russia will strike the information warfare and psychological operation center of the Ukrainian Armed Forces as well as technological facilities of the Ukrainian Security Service in Kiev with high-precision weapons.

The raid will be aimed at countering Ukraine's "information attacks" on Russia, including cyberattacks against various state institutions and bomb threats, he said, urging people living near these facilities to leave.

2nd round of Russia-Ukraine talks eyed

The second round of peace talks between Russia and Ukraine could take place on Wednesday, the TASS news agency reported Tuesday citing sources.

The first round of the negotiations, which lasted about five hours, concluded on Monday in Belarus' Gomel region, with no clear breakthrough.

"Most importantly, we agreed to continue the negotiation process. The next meeting will be held in the coming days on the Polish-Belarusian border," Vladimir Medinsky, head of the Russian delegation, said after the talks.