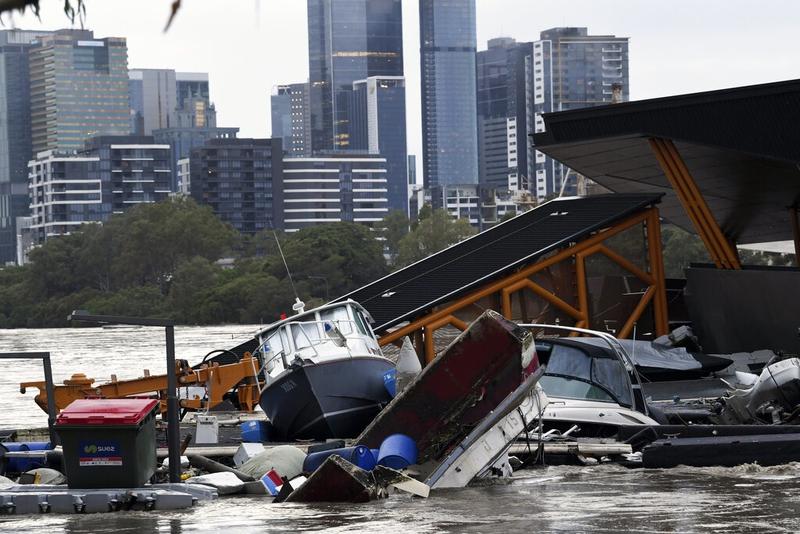 Boats and other debris are seen washed into the Milton ferry terminal on the Brisbane River in Brisbane, Australia on Feb 28, 2022. (DARREN ENGLAND / AAP IMAGE VIA AP)

SYDNEY - Tens of thousands of people were ordered to evacuate as heavy rains smashed Australia's east coast on Monday, submerging towns and stranding residents on rooftops, with authorities warning of life-threatening flash floods.

Prime Minister Scott Morrison, who called the unprecedented rains a "weather bomb", said defense personnel would be deployed to flood-hit areas to lead both rescue and recovery operations

Nine people have been killed since the deluge began last Thursday, and rescue teams were searching on Monday for at least four people reported missing.

Prime Minister Scott Morrison, who called the unprecedented rains a "weather bomb", said defense personnel would be deployed to flood-hit areas to lead both rescue and recovery operations.

"What we are seeing today is unprecedented and the advice that we have received is we would expect things to get worse," NSW Premier Dominic Perrottet told a televised briefing.

In the northern NSW city of Lismore, the entire CBD was underwater and the Bureau of Meteorology warned the city's Wilsons River could reach around 14.2 meters on Monday afternoon, surpassing the last peak back in 1954. 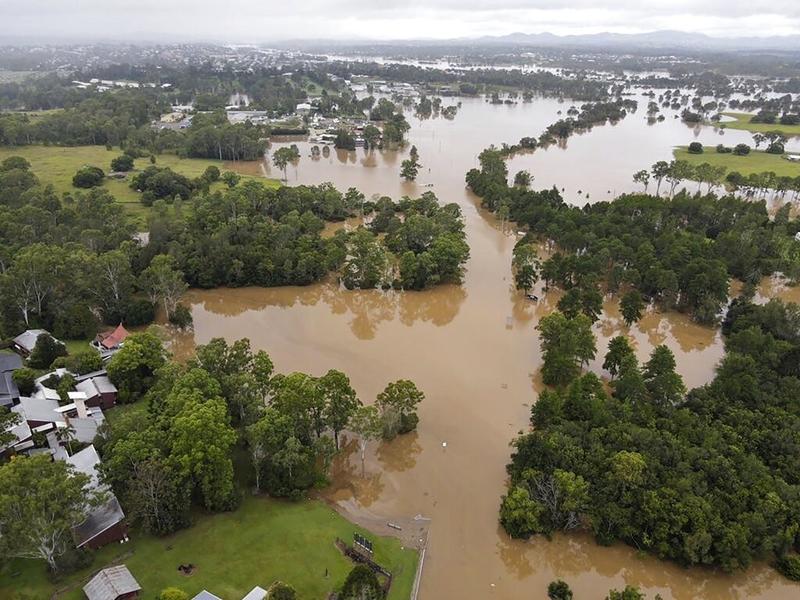 In this photo provided by the Queensland Fire and Emergency Services, water floods land and buildings near Gympie, north of Brisbane, Australia on Feb 27, 2022. (QUEENSLAND FIRE AND EMERGENCY SERVICES VIA AP)

"I have been fielding calls from very distressed residents who are sitting on rooftops trying to get help. It's diabolical," Lismore Mayor Steve Krieg told broadcaster ABC.

Krieg said the sheer speed of rising waters caught people by surprise as he urged the town's near 30,000 residents to leave their homes immediately.

Lismore resident Kara Ahearn said she, her partner and three children were rescued by a kayaker from their roof, to where they had fled when their house was inundated within two hours.

"Very intense morning ... very shaken" she told ABC. "We had to leave our pets behind ... we didn't even have time to put our shoes on." 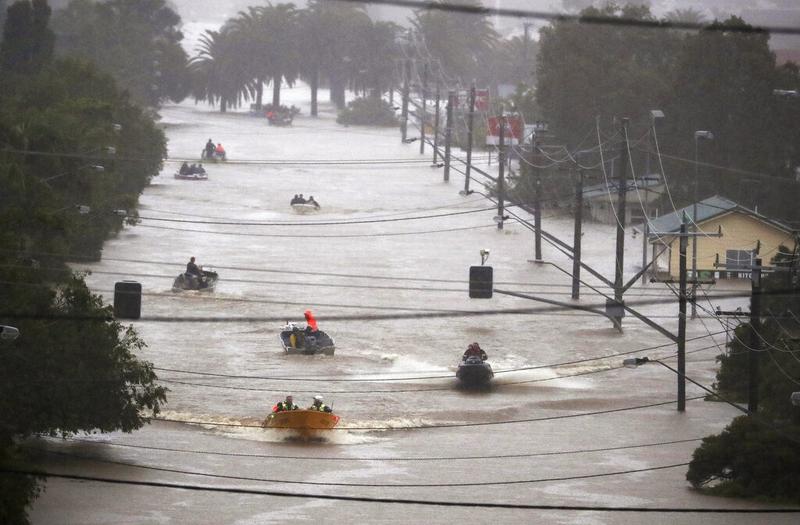 People use small boats to travel through flood water in Lismore, Australia on Feb 28, 2022. (JASON O'BRIEN / AAP IMAGE VIA AP)

Australia's east coast summer has been dominated by the La Nina climate pattern, which is typically associated with greater rainfall, for the second straight year.

Several regions have seen rainfall records for February broken because of the relentless downpour, with some places getting more than a month's or more than a year's rains in one day.

Australia's east coast summer has been dominated by the La Nina climate pattern, which is typically associated with greater rainfall, for the second straight year

Many of the nine fatalities were people who had attempted to cross flooded roads, either by foot or in a vehicle, including one man who was found in a submerged car on Monday morning with his deceased dog.

"We say this every time during flooding events," Perrottet said. "If you drive through floodwaters, you are putting your life, and the lives of others, at risk.

Insurer Suncorp on Monday said it had received more than 5,000 claims related to the floods and estimates costs of about A$75 million ($54 million).