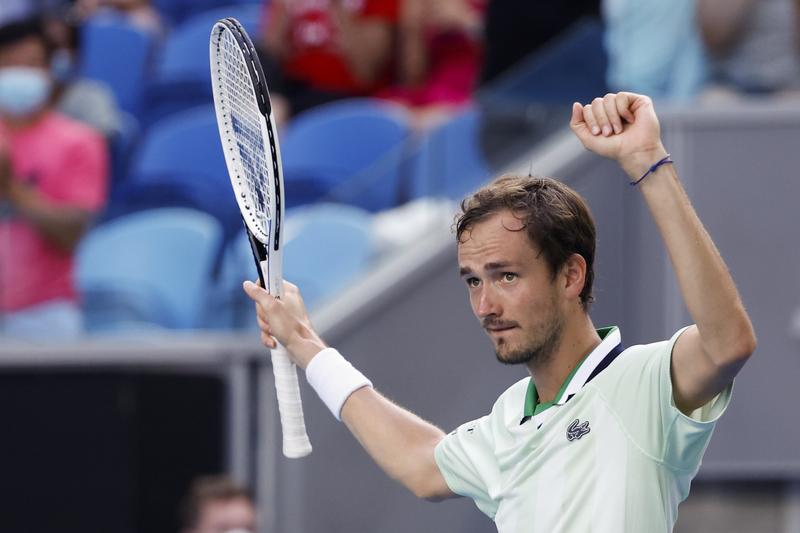 Daniil Medvedev of Russia celebrates after defeating Maxime Cressy of the US following their fourth round match at the Australian Open tennis championships in Melbourne, Australia, Jan 24, 2022. (HAMISH BLAIR / AP)

MELBOURNE - Daniil Medvedev admitted to playing mind games in a bid to knock Maxime Cressy off his stride after the American serve-volleyer proved hard to beat in a stifling fourth round clash at the Australian Open on Monday.

In oppressive heat at Margaret Court Arena, Medvedev claimed a taxing 6-2 7-6(4) 6-7(4) 7-5 win over the French-born Cressy but lost his cool after dropping the third set and began venting his frustration loudly.

The Russian second seed shouted "this is so boring" as Cressy held firm at 1-1 in the final set and later roared "this is my unluckiest day ever" when a shot hit the net-cord and dropped on his side.

"I was trying to get into his head so maybe he changed his tactics," Medvedev told broadcaster Eurosport of his histrionics.

READ MORE: Zverev: Djokovic, Medvedev and I to form big three in 2022

Medvedev saw eight successive break points slip through his fingers in the final set until finally taking Cressy's serve in the 11th game.

He slipped a forehand past Cressy on the ninth break point and then served out the match in a hurry to book a quarter-final against Canadian Felix Auger-Aliassime.

"I just had so many break points. I just wanted to make one," said second seed Medvedev, the tournament favorite in the absence of the deported Novak Djokovic.

The rangy Russian is not shy of confrontation, having criticized sections of the home crowd after beating Nick Kyrgios earlier in the tournament, an echo of his long-running feud with fans at the 2019 US Open.

After dropping the third set against Cressy, Medvedev picked a fight with chair umpire Renaud Lichtenstein after apparently being refused a request to leave the court to freshen up.

He barked at the Frenchman that the American was allowed too much time between serves.

"It's a great showing for Canada," said Auger-Aliassime, who combined with Shapovalov to win the team-based ATP Cup in the leadup to Melbourne Park.

"Even though we're not originally a country of tennis, I think now we really are. We have shown that over and over again."