By Wang Xiaoyu in Kunming and Luo Wangshu in Beijing 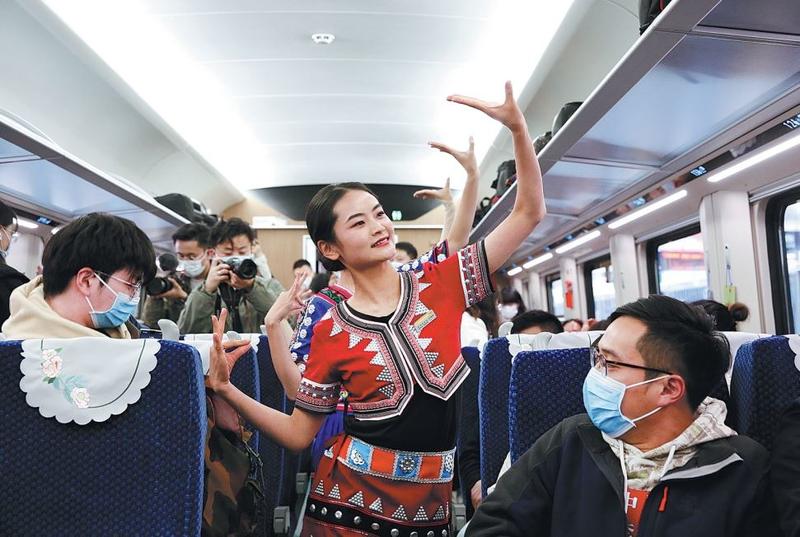 Ren Geng and many of his old friends from Chongqing and Shanghai are excited about the opening of a new railway line linking China and Laos.

The 1,035-kilometer line, which opened to traffic on Friday, runs between Kunming, capital of Yunnan province, and Vientiane, capital of Laos.

The maiden journey, carrying about 700 passengers, departed from Kunming and headed to Mohan, a border port.

It is the first overseas railway project that is mainly invested, constructed and operated by China and linked to China's rail system

According to China State Railway Group, it takes about 10 hours to get from Kunming to Vientiane.

The line, with a top speed of 200 kilometers per hour, has 50 stations.

It is the first overseas railway project that is mainly invested, constructed and operated by China and linked to China's rail system.

The line has garnered positive headlines and has been warmly received by people from both nations.

What excites Ren and his peers is that the high-profile line passes Xishuangbanna, where the group spent their youth.

"In our chat group, friends have been sharing news about the railway recently. If it weren't for the COVID-19 pandemic, many of us would have already been packing our luggage and taking the ride," the 66-year-old said.

Ren is a zhiqing, a "sent-down youth" who spent eight years in a village in Xishuangbanna from the ages of 16 to 24. He was sent from Chongqing, his hometown, to Xishuangbanna as part of a campaign that saw urban youth live and work in rural areas during the "cultural revolution" (1966-76).

Most zhiqing left Xishuangbanna in the late 1970s and early 1980s.

Most of Ren's best friends are old zhiqing friends from Chongqing and Shanghai. Amid the domestic tourism boom in recent years, they visited Xishuangbanna from time to time during the winter to honor their youth and enjoy the tropical environment.

"Forty years ago, it took me seven days to get from Chongqing to Xishuangbanna. I took the train from Chongqing, made a transfer in Guiyang, capital of Guizhou province, and then arrived at Kunming. From there, I took long-distance buses to Mengpeng town in Xishuangbanna with several transfers and walked to the village. Now with the new train, it cuts travel time between Kunming and Xishuangbanna to about three hours. I never imagined I would see this happening in my lifetime," he said. 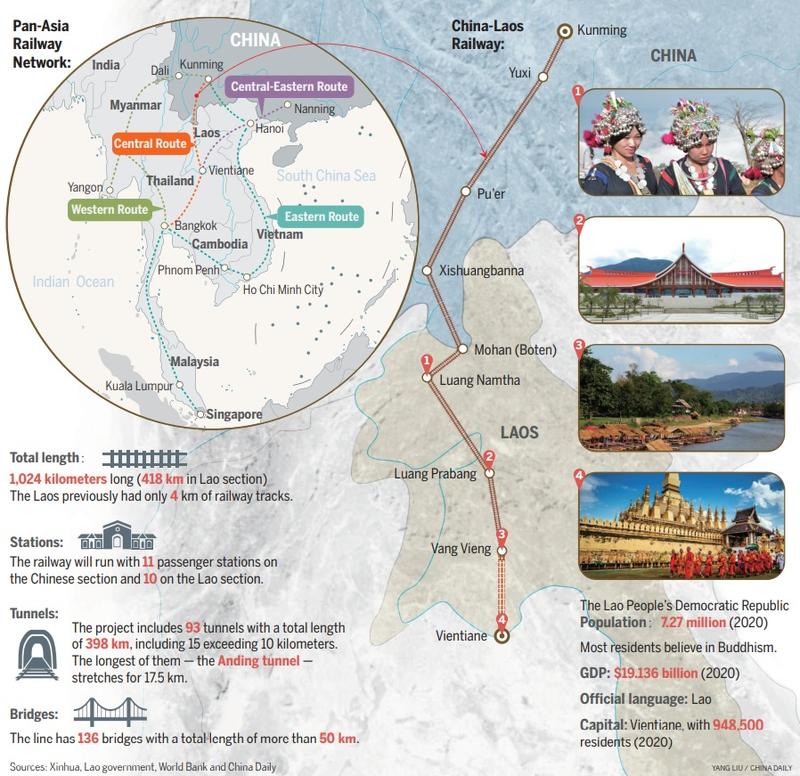 Hang Dianhua, 76, was on the first train on Friday from Kunming to Xishuangbanna.

"I am able to take the first ride because my former student took part in the construction project. It is a proud event for China," the former high school chemistry teacher said.

I am able to take the first ride because my former student took part in the construction project. It is a proud event for China.

"I hope to take my daughter and two granddaughters who live in Beijing on the train in the future,"Hang said.

Engineer Ouyang Qiang, who participated in construction of the new line, said passengers can enjoy stunning scenery along the line.

"Something unique about the railway is that each station along the line has a special and spectacular view," he said, adding that Yunnan has pleasant weather in all seasons and the views are spectacular year round.

He also hopes to take his family to ride the train to travel in Yunnan next year.

Jaruwan Udomsab, a Thai who works in Yunnan, also was a passenger on the train's maiden voyage. She has come to appreciate that Chinese people love tropical fruit from Thailand, such as durian.

She believes fruit from her hometown can be sent faster and cheaper to China via the new railway line.

She also said that new tourism routes might be developed thanks to the line, and welcomes more Chinese people to take the railway to Laos, and then visit Thailand.

The line's China section has opened to passengers and freight but the international portion is only open to cargo shipments at the moment.

The full opening of the international passenger service is being delayed due to the COVID-19 pandemic.