UK inflation surges to highest in a decade on energy costs

UK inflation climbed faster than expected to the highest in a decade, heaping pressure on the Bank of England to raise interest rates and tightening a squeeze on living standards for households.

Consumer prices rose 4.2 percent from a year ago in October, the fastest pace since November 2011, the Office for National Statistics said Wednesday. The figure was up sharply from 3.1 percent in September and the reading of 3.9 percent expected by economists. 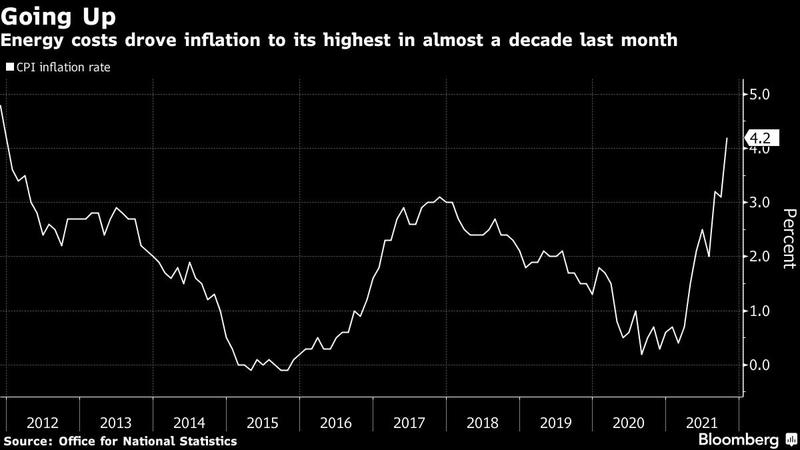 The Bank of England has warned that it’s likely to lift borrowing costs in the coming months to keep inflation in check, estimating that prices may leap 5 percent early next year, more than double its target. The pound rose after the report, with investors bracing for a move next month after stronger labor market data on Tuesday indicated upward pressure on wages.

“With high inflation sticking around, this may force a response from the Bank of England in just a matter of weeks,” said Sukhdeep Dhillon, senior economist at BNP Paribas Real Estate.

Growth in employement and wages this week reinforced views that the BOE is likely to move to prevent an upward spiral in prices from taking hold. Business groups sounded a note of caution, highlighting weaker economic growth and signs of weakness in consumer spending and confidence

For now, inflation is largely driven by temporary factors linked to the revival of global demand following the pandemic. However, the BOE is concerned that inflation could take root more widely if left unchecked.

Growth in employement and wages this week reinforced views that the BOE is likely to move to prevent an upward spiral in prices from taking hold. Business groups sounded a note of caution, highlighting weaker economic growth and signs of weakness in consumer spending and confidence.

“The Bank of England are facing a tricky trade-off between surging inflation and a stalling recovery,” said Suren Thiru, head of economics at the British Chambers of Commerce. “However, with the UK. economy facing mounting headwinds, raising interest rates too early should be resisted.” 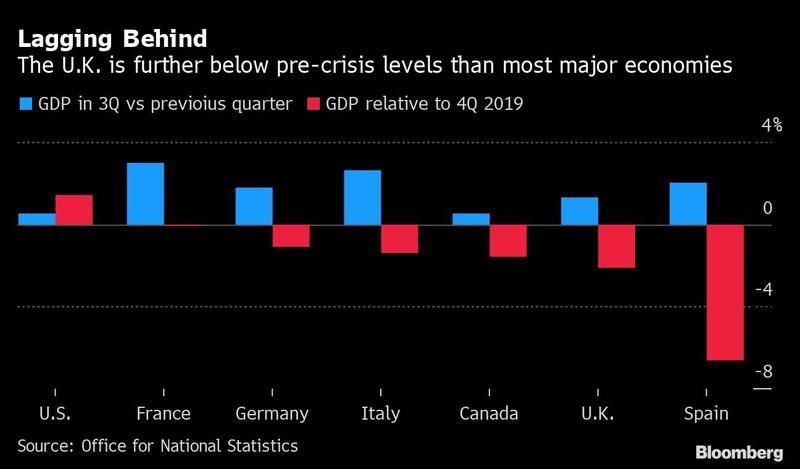 The pickup in inflation last month was driven by natural gas and electricity prices after regulator Ofgem allowed suppliers to hike tariffs by as much as 12 percent to offset rising wholesale costs.

The prices charged for food, motor fuel, used cars and at restaurants and hotels also contributed to the sharp increase in inflation.

Households face the prospect of another steep rise in April, along with a sharp increase in payroll taxes. That could undermine the recovery by leaving people with less money to spend on other goods and services.

Rising prices also present a problem for Chancellor of the Exchequer Rishi Sunak by making it more expensive to service inflation-linked government bonds. The Retail Price Index, which determines payments on index-linked gilts, rose to 6 percent in October, the fastest pace since April 1991.

“Many countries are experiencing higher inflation as we recover from COVID, and we know people are facing pressures with the cost of living,” Sunak said in a statement. “We’re helping people get into work.”

“While painful for households, the fact is that the global nature of these inflationary pressures mean that traditional tools such as raising interest rates are likely to have little effect,” said Jack Leslie, senior economist at the Resolution Foundation. “Instead, we need to focus on securing the as yet incomplete COVID recovery so that stronger growth creates more scope for higher pay rises.”

In a worrying sign for policy makers, companies are increasingly talking up the prospects of price rises to cover rising wage and other costs. If workers demand higher wages to maintain their living standards, inflation could prove more persistent than initially assumed.

Separate ONS figures showed cost pressures building further down the pipeline. The prices manufacturers pay for fuel and raw materials surged 13 percent in October compared with a year earlier, the highest since September 2008. In response, factories raised the prices they charge their customers by 8 percent, the most since September 2011.