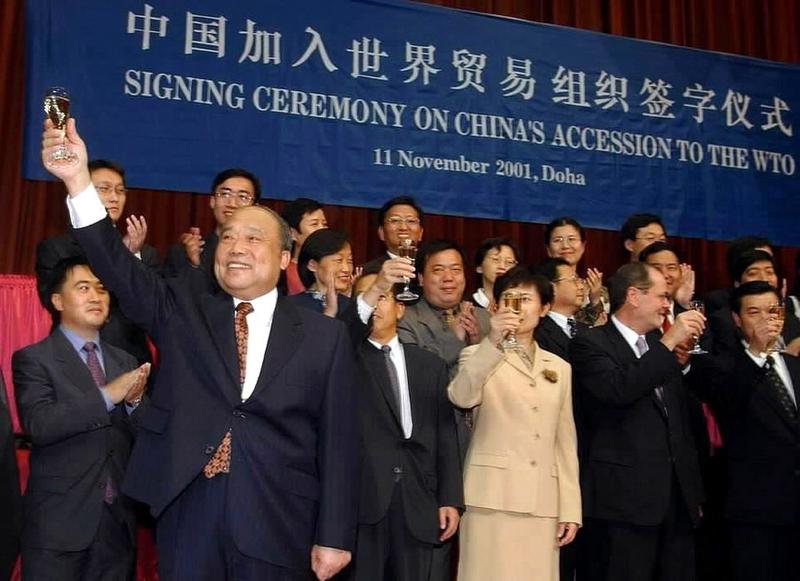 File photo shows Shi Guangsheng (left, front), then Chinese minister of Foreign Trade and Economic Cooperation, celebrating with others after signing the protocol of China's accession to the World Trade Organization on behalf of the Chinese government in Doha, Qatar, Nov 11, 2001. (WANG JIANHUA  / XINHUA)

NEW YORK – China's entry into the World Trade Organization two decades ago was "a tremendous push to globalization," benefiting both China and the world, a renowned US economist has said.

"Without (China's) membership in WTO, a lot of economic growth and integration would not have taken place," Jeffrey Sachs, director of the Center for Sustainable Development at Columbia University, told Xinhua in a recent interview.

He noted that China has developed as a significant player over the past decades, becoming "the major trading partner for most of the world now," which is not only "a remarkable accomplishment," but also "a huge benefit for the world."

In the past 20 years, China's global ranking of trade in goods has risen from the sixth to the first, while that of its trade in services has jumped from the 11th to the second.

China is a big supporter of the multilateral system, and this is exactly what we need right now.

Calling China's sustained efforts to develop economic and trade ties with other countries an "excellent strategy," Sachs said the world's second largest economy is recommended to "continue to increase its trade with other parts of the world.” China "can play a hugely positive role" in development in regions such as Southeast Asia, Central Asia, and Africa, he added.

Moves like the Belt and Road Initiative are very important for helping finance development in other places, upgrading the infrastructure and building the economies that are still lagging behind, which in the long run are "mutually beneficial," he noted.

"China is a big supporter of the multilateral system, and this is exactly what we need right now," he said. "Most of our problems are global scale. Unless we have effective global institutions, we won't be able to solve these problems."

Sachs cautioned about the consequences of the US obsession with the so-called "decoupling" theory, while emphasizing the need and urgency for closer collaboration between the world's two leading economies.

"Those who say we should decouple could lead us to conflict, which would be very dangerous. I like the interdependence," he said.

"It's extremely important that China and the United States find cooperative approaches" to address their differences, keep normal economic relations with each other and work together to solve some big problems like climate change, the COVID-19 pandemic and the conservation of ecosystems, he added.