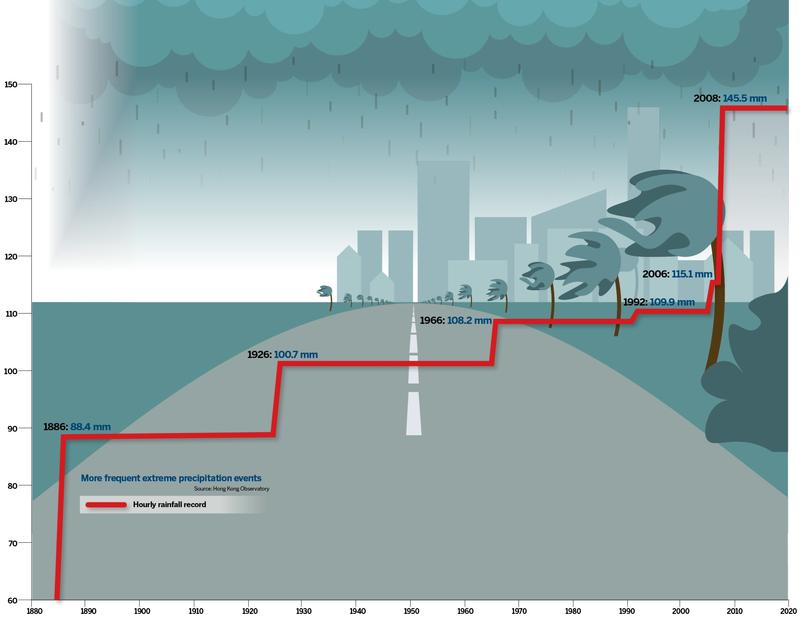 The United Nations Intergovernmental Panel on Climate Change warned in its sixth assessment report in August that human beings will fail to limit global warming to 1.5 degrees or even 2 degrees C by 2050. It expects sea levels to rise 2 meters by 2100, and 5 meters by 2150. Extreme sea levels that occurred in 100-year cycles could happen every year by the end of this century.

Climate-change effects from global warming have multiplied in frequency and ferocity in 2021. Previous annual patterns of typhoons and monsoons mostly struck the developing world, but this is not the case anymore. Advanced societies were hit badly this summer, and most were unprepared. Disaster mitigation measures proved inadequate everywhere.

Torrential downpours battered Germany, Belgium, London, and New York City, with wildfires ravaging California uncontrollably, and a heat dome settling over Canada, sending temperatures to 50 C. Roads deformed and cables melted under the heat waves that swept through Canada and the United States. 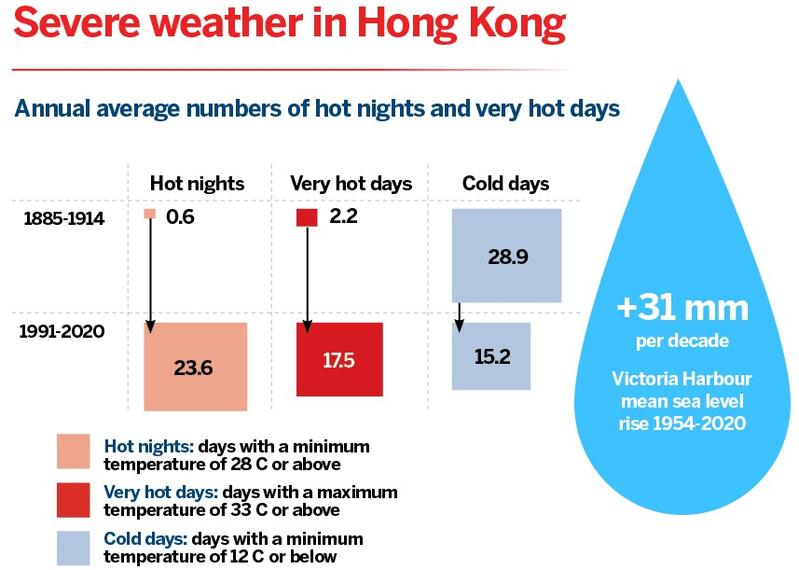 The Greater Bay Area recorded 30 hot days in 2020, the most since 1961, about 17 days more than the average between 1981 and 2010. In May and June, heavy downpours struck the southern parts, affecting at least 300,000 people, triggering flooding and landslides.

The US nonprofit organization Climate Central in 2019 wrote in science journal Nature Communications that critical areas of the Greater Bay Area may be under high water by 2050. These include the Hong Kong’s airport and its West Kowloon and Yuen Long districts, plus vast areas of Zhongshan, Foshan, Guangzhou, and Dongguan.

Chen Xiangsheng, dean of Shenzhen University’s College of Civil and Transportation Engineering, said the recent global incidents were a serious wake-up call to the Greater Bay Area. Chen said he believes the region has the economic strength and engineering capacity to increase its protection of infrastructure systems. While coastal cities can drain off floods into the sea, there are still high risks from typhoons, storm surges, and torrential rains, Chen said.

The Greater Bay Area has plenty of coastal infrastructure, such as reclaimed land, bridges, high-rise buildings, extensive underground rail networks, and commercial offices. It also has key transportation and scientific facilities, like the world’s largest seaport group, an airport group, and high-tech enterprises.

In Zhengzhou, a northern Chinese city of over 10 million people, a relentless downpour  in July dumped a year’s worth rainfall in just three days. That immediately overflowed its drainage system, sending muddy torrents through streets, sweeping cars aside like toys, and flooding tunnels, where subway trains were trapped, with parents desperately holding children above the waterline.

The deluge stranded millions. The city was paralyzed, with essential services disabled. Residents lost their water supply, electricity, and internet access. They were isolated physically without mobile communication. The deployment of soldiers and helicopters rescued many via physical evacuation and food supplies.

The July Zhengzhou flooding sounded another alarm: On Aug 5, Guangdong province required all subway operators to formulate new standards for the shutdown of stations, sections, lines, and networks, to prevent passengers from being trapped in flooded subways.

Chen suggested prioritizing key public facilities of high risk from extreme weather to strengthen their protection and improve monitoring and early-warning systems. These include hospitals, schools, nursing homes, and facilities requiring water and electricity. “We must ensure their safety at the highest level, for the worst-case situation.”

Chen, who is also chief engineer of Shenzhen Metro Group, said the recent subway flooding incidents around the globe indicate that metropolitan infrastructure systems are vulnerable to extreme weather.

He said that since 2011, the nation has recorded 20 incidents of subway flooding, and the Zhengzhou incident was a serious warning. In the future, besides rail traffic, underground space is expected to shoulder more functions, whether for commercial use, emergency transportation, or reducing carbon emissions. He said he felt an urgent need to review the disaster prevention standards of underground facilities.

Aaron Bok-Kwok ming, former head of the Hong Kong government’s Civil Engineering and Development Department, advised deployment of temporary flood prevention facilities at the entrances of flood-prone subway stations and major tunnels that were built a long time ago.

Zhang Xi, senior engineer of the Shenzhen Urban Public Safety and Technology Institute, proposed more escape facilities and better public guidance. He wanted better public awareness of important safety signs. Many drivers were stranded in water-logged areas in the Zhengzhou incident because of insufficient understanding of the signage, he added.

The flooding of Europe and Zhengzhou this year left many districts without water, electricity, and the internet, like what occurred in Zhuhai and Macao in 2017, during Hato. Quince Chong Wai-yan, chief corporate development officer of CLP Power, which provides electricity to 80 percent of Hong Kong’s population, said CLP has contingency plans to ensure the company’s transmission and substations can withstand super typhoons. It is also upgrading power grid links with Guangdong for more clean energy.

Zhang Wei, network development director of China Mobile Hong Kong, confirmed the city has reliable base stations for telecommunications stability in extreme weather. Zhang hopes other cities in the Guangdong-Hong Kong-Macao Greater Bay Area can emulate Hong Kong’s robust standards to withstand weather disasters, and speed up the granting of permission to reinforce base stations in flood-prone areas.

Since 2018, the Greater Bay Area issued three annual bulletins of the region’s change, including the developments of extreme weather. And a meteorological monitoring and forecasting center has been established in Shenzhen in 2019.

Kou Kun-pang, vice-president of the Macao government’s environmental advisory committee, said more can be done in sharing information on major infrastructure projects, setting revised safety standards and provisions for extreme weather. “What new initiatives are implemented in other cities? Are they effective or not? We can learn a lot from sharing experiences,” he said.

Kou said that Macao’s plan to construct tidal gates 5.65 meters above sea level will affect the sea levels of neighboring Zhuhai and Hong Kong. When the Greater Bay Area is hit by natural disasters, the arrangements for cross-border supplies and transportation needs better coordination, too, he added. 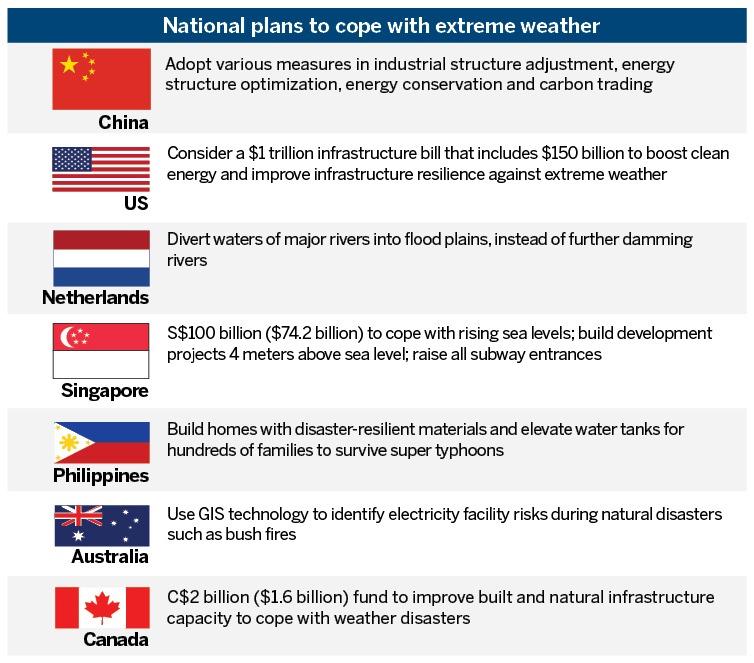 Wong said that in recent years, the Greater Bay Area has seen increasing extreme weather, with more hot days and cold days. Some designs, such as the expansion joints to absorb temperature-induced expansion and contraction, may not cope with the changing climate because they were designed for mild weather.

He suggested independent criteria for extreme weather infrastructure design apart from the current risk assessment. The new criteria could be based on integrated weather analysis of the whole Greater Bay Area. A body dedicated to studying extreme weather could develop the safety standards for all.

Some low-lying areas have become busy business centers, such as the Central and Tsim Sha Tsui districts, leaving little room to deploy additional sea wave defense projects. Typhoons Mangkhut and Hato induced storm surges as high as 4.71 and 4.56 meters respectively in 2018 and 2017. If the sea level rises by 1 meter by the end of the century per UN estimates, low-lying areas will face huge flooding, Chung said. 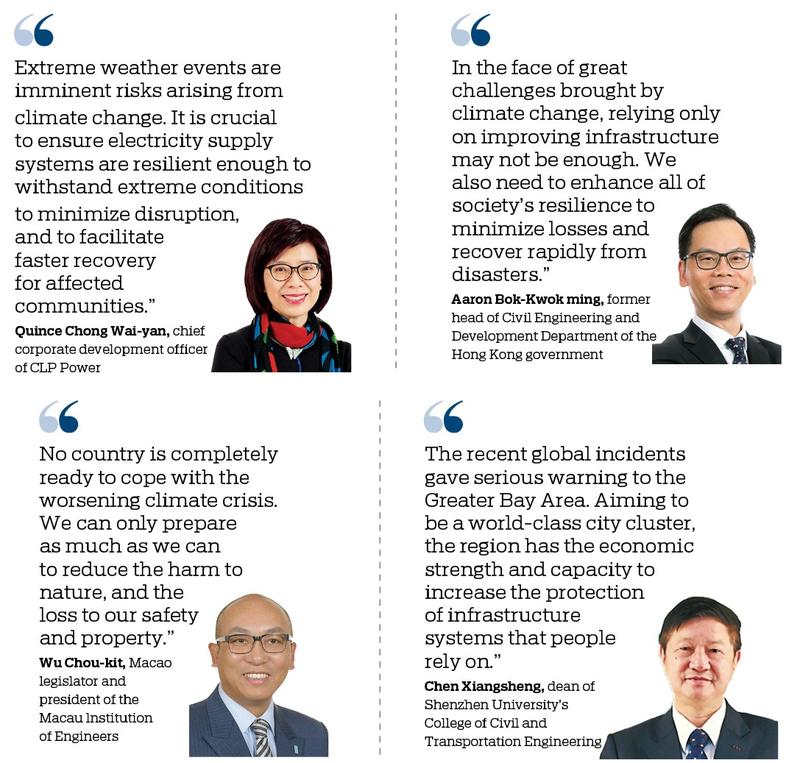 In August, the US Senate unveiled an infrastructure bill of $1 trillion. More than $150 billion will boost clean energy and make infrastructure such as schools and ports more resilient to extreme weather. (The US House  of Representatives also must pass the legislation and US President Joe Biden must sign it before it becomes law.)

Singapore has elevated climate change to the importance of national defense. Prime Minister Lee Hsien Loong expects Singapore to invest $74.3 billion over the next century, to cope with rising sea levels. He proposed development projects 4 meters above sea level, having Changi Airport’s new passenger terminal 5.5 meters above sea level, and raising all subway entrances as precautions.

The light rail system in Rotterdam, the Netherlands, applied the technology for soil to soak up rain. Japan specified that railway tracks must be able to withstand temperatures of 60 to 65 C to prevent track deformation. Tokyo also built huge underground reservoirs for flood storage.

Wu Chou-kit, Macao legislator and president of the Macau lnstitution of Engineers, said that no country is completely ready to cope with the worsening climate crisis. “We can only prepare as much as we can to reduce the harm to nature, and the loss to our safety and property.”