By Zhou Mo in Shenzhen and Zeng Xinlan 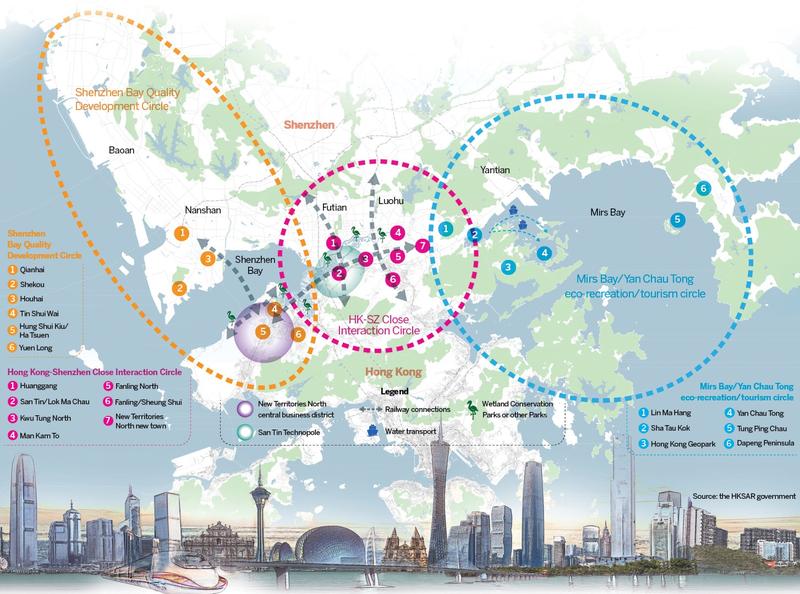 The making of the Northern Metropolis heralds a reshuffling of Hong Kong’s landscape and economy in the coming years — an ambitious and timely visionary move to optimize the city’s unbalanced economic structure and integrate it into the robust development of the Guangdong-Hong Kong-Macao Greater Bay Area, pundits said.

In the last Policy Address of her administration’s current tenure, delivered on Oct 6, Chief Executive Carrie Lam Cheng Yuet-ngor unveiled a blueprint to develop the northern part of Hong Kong into a metropolitan area.

Known as the Northern Metropolis Development Strategy, the mega project aims to ease Hong Kong’s long-standing housing and land-shortage problems and promote economic integration with its neighbor Shenzhen and other member cities of the Greater Bay Area.

With an area of 300 square kilometers, the proposed Northern Metropolis will cover two district administration areas — Yuen Long district and North district. It’s expected to accommodate 2.5 million people and provide about 650,000 jobs, including about 150,000 innovation and technology-related posts.

“We have to believe Hong Kong can afford to have two central business districts. One will focus on financial and professional services, which will continue to be around Central, and the other will involve technology, innovation and advanced manufacturing that will be developed along the border between Shenzhen and Hong Kong,” said Tang Heiwai, a professor of economics at the University of Hong Kong.

Hong Kong’s policymakers should have the faith and confidence to make that possible, followed by appropriate infrastructure positioning to create a complementary effect between the region’s two engine cities, he said.

“The dual-metropolis plan should provide Hong Kong with adequate land resources to achieve that without sacrificing what has already been built to accommodate an even larger international financial hub in the city’s urban areas,” Chan said, “With tech and telecom firms occupying just 5 percent of space in Hong Kong’s Grade-A office market, creating a designated hub to accommodate further growth of this sector is unlikely to have a detrimental impact on the downtown office market.”

The two metropolises are the Northern Metropolis and the Harbour Metropolis. While the former focuses on Hong Kong’s I&T development, the latter is aimed at strengthening the city’s status as an international financial center. Lam said the government plans to move ahead with the Kau Yi Chau artificial island under the Lantau Tomorrow Vision project and to merge that with Hong Kong’s existing commercial districts alongside Victoria Harbour to form the Harbour Metropolis.

Pak Cheung, community development officer of the New People’s Party, said the financial sector’s dominance in the local economy is unhealthy and has led to longer commuting times and weighing on people’s living standards. “Many people work in financial companies, which are centered along Victoria Harbour — in the Central, Tsim Sha Tsui, Sheung Wan and Wan Chai districts. People living in areas like Tin Shui Wai have to spend long hours commuting to and from work due to the distance and traffic jams. As a result, they may end up living in subdivided flats near Central, dragging down their living standards.”

Unlike previous city plans which often focused on specific or “trivial” matters, the Northern Metropolis notion is special and bold, and it  will prepare the northern region for self-sustainability, providing ample job opportunities and with better infrastructure, Cheung said.

New infrastructure to shorten commute times between the two cities will also help broaden options for corporates on both sides of the border seeking to formulate future office strategies, he added.

Xu Chi, an analyst from Zhongtai Securities, wrote in a research report that the Northern Metropolis plan will play an important role in maintaining Hong Kong’s stability and optimizing its industrial structure.

For years, Hong Kong has been grappling with a big wealth gap, with local young people feeling frustrated about being unable to own a roof over their heads. That’s a factor behind the city’s social unrest in 2019, he said.

“Meanwhile, with a focus on I&T development, the Northern Metropolis development plan will also help improve Hong Kong’s hollowing-out problem of industries by changing the traditional landscape of heavy reliance on finance and property.”

Hong Kong’s economy has been dominated by tertiary industries, which accounted for 93.4 percent of its GDP in 2019, according to official statistics. Among the four key industries of Hong Kong, value-added financial services took up 21.2 percent of the city’s total in 2019, followed by trading and logistics at 19.8 percent. Professional services and other producer services were the third-biggest contributor at 11.9 percent, followed by tourism, with 3.6 percent.

Industrial focus and transportation infrastructure are pivotal to Hong Kong’s new-town planning, and a lack of both has led to disappointments in previous plans to accelerate urbanization. The Northern Metropolis blueprint has addressed these issues, said Ryan Ip Man-ki, head of land and housing research at local think tank Our Hong Kong Foundation.

“The government has drawn a clear industrial policy, such as building a new technology zone around San Tin, to complement the Hong Kong-Shenzhen Innovation and Technology Park and develop modern services in the Hung Shui Kiu area,” Ip said.

He expects the industrial positioning to benefit multifarious parties, such as innovation and technology companies, entrepreneurs and professionals.

Synergizing the industrial ambition, the Hong Kong government plans to discuss five new railway projects to link the Northern Metropolis with Shenzhen, such as the cross-border rail link between Hung Shui Kiu/Ha Tsuen and Qianhai, Shenzhen, and extending northward the Northern Link to the new Huanggang port via Hong Kong- Shenzhen Innovation and Technology Park in the Lok Ma Chau Loop, according to the latest Policy Address.

Ip said policymakers should consider charting an extra line connecting the city’s north and the south, as the current north-south railroad, mainly the East Rail Line, has reached full capacity. “With the construction of the Northern Metropolis, Hong Kong will form a north-south bi-metropolitan landscape, and the authorities cannot ignore the potential cross-district transport demand.”

He urged the government to study extending the East Rail Line from Fan Ling to Tai Po, and further connecting it with Mei Foo and with the transportation network of the Lantau Tomorrow Vision development.

With the right industry and supportive transportation, Ip expects the plan to ease the chronic problem of long commuting time to benefit the city’s residents by accommodating innovation and professional-services talents, in particular; to work and live in the neighborhood. The cross-border workforce will also contribute to the demographics, Ip added.

Hong Kong can develop artificial intelligence, financial technology, smart city, the internet of things and other high-tech areas there by leveraging its strong research and development capabilities, he said.

In this way, it can turn the northern part of the city into a research and development base for the high-tech sector and attract a number of high-tech enterprises to settle down there, thereby making technology a key industry of Hong Kong in the future, Chen said.

Looking forward to the new landscape in 20 years, Ip said the time period could be shortened by streamlining the lengthy land development process. “The timeline of 20 years is scientific, but not ideal,” he said, saying the government should aim for 10 years — from the day of the project’s launch to the day when the first batch of residents moves in.

Tang said Hong Kong shouldn’t drag its feet and must move faster with a new vision and new wisdom amid growing competition with the other cities in the Greater Bay Area.

“Doing it over 20 years is too slow. I know it’s challenging, but it (the government) has to think about its own bureaucracy to understand why it has to take so long because the people won’t wait for us.”