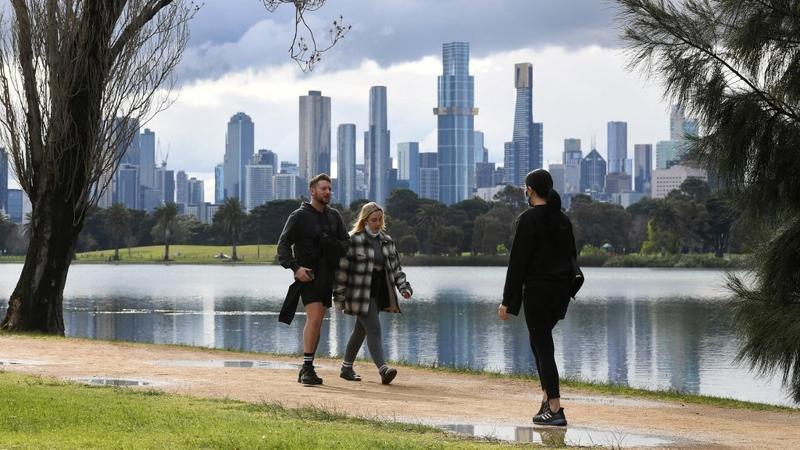 People exercise in front the city skyline in Melbourne on Aug 29, 2021, as authorites announced the extension of an ongoing coronavirus lockdown in Australia's second-biggest city. (WILLIAM WEST / AFP)

SYDNEY - After two years of stop-start COVID-19 lockdowns Australia is ready to party, but venues from restaurants to sporting stadiums are facing a difficult summer after a huge exodus of holiday workers and foreign students.

Strict border closures have left a gaping hole in the market for casual workers, with hospitality-focused firms like Sydney's AlSeasons being forced to turn down some jobs even as the economy opens up.

"Prior to lockdown, you could place an advertisement and have hundreds of applicants," said Rhondda Everingham, hiring manager at the hospitality labor hire company.

"Now you're lucky if you get five and you might have three that are suitable, and by the time you get a hold of them, they've got another job."

The labor shortages are hitting hardest at public-facing businesses, those already most affected by months of rolling lockdowns in the two biggest cities of Sydney, which ended many COVID-19 curbs on Oct 11, and Melbourne, which moved late last week.

Government statistics show the number of non-resident workers in the country — often travelers with work visas — was down by two-thirds in the June quarter of 2021 from the start of 2020.

The fall in international students has been nearly as dramatic, said Peter Hurley, a researcher of education policy at Victoria University. There are now some 300,000 fewer foreign students living in Australian than at the start of the pandemic, a drop of more than half.

That has left businesses in Sydney, home to a quarter of Australia's 2.2 million casual workforce, struggling to find staff as the city emerges from four months of lockdowns.

In the first big test of event staffing, a stadium soccer match was given eight days to find 730 cooking, serving, cleaning and security staff for 22,500 permitted spectators on Oct 25.

Stadium operator, VenuesLive, got the headcount because there were no other big events on at the same time, a company representative said, noting that "hospitality businesses everywhere are encountering staff challenges."

The government of New South Wales state, of which Sydney is the capital, plans to resume taking modest numbers of international students and has said it wants immigration into Australia to double from pre-COVID levels to 400,000 people a year to fill labor shortages.

For now, the federal government, which enjoyed popular support for hardline border closures early in the pandemic, is sticking with a staged reopening. It says only Australian citizens, residents and their family members may enter the country at present.

Even when foreign nationals return, many employers face a delay hiring them because they demand staff with local experience and proficient English, said AlSeasons' Everingham.

So, employers are adding incentives.

Australian Venue Co, owner of 160 pubs and clubs around the country, said it was offering A$1,000 ($745) vouchers for new kitchen and floorstaff who stay longer than three months due to difficulty finding personnel.

MSS Security, which guards university, corporate and government buildings around Sydney, will spend A$1 million a year to bankroll industry-required training and help fill vacancies that have doubled to 400 since early 2020, said managing director Geoff Alcock.

Pompei's, a popular Italian restaurant at Bondi Beach, traded through lockdown offering takeout and delivery, but is now closing for weekday lunches and all of Monday for the first time in 20 years because half its staff have left the country, said owner George Pompei.

Despite advertising a A$2,000 cash "sign-on bonus" for waitstaff and bar staff, nobody has shown up for an interview.

"Before, you couldn't wait to hear the phone ring and people wanting to book and queuing out the front. Now you almost don't want that," Pompei said. "This is the new 'COVID-normal'."