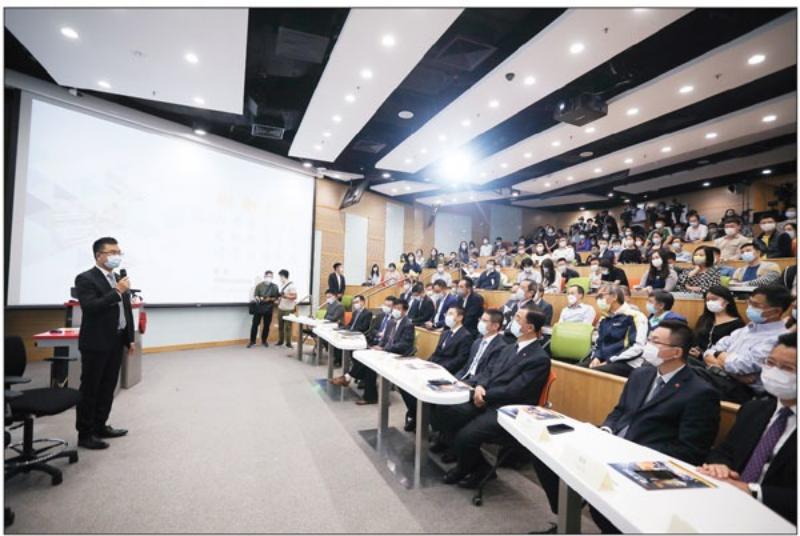 He described the hospitals as "the best gifts" given to Hong Kong during its tough times and said they reflected the fact that the motherland is Hong Kong's strongest backer at all times. Both projects were part of measures announced by the central government to help the city combat the COVID-19 pandemic, when it was embroiled in its worst coronavirus outbreak in July 2020.

Construction work on the temporary hospital was undertaken by China State Construction International Holdings with the assistance of the Shenzhen and Hong Kong governments.

The new cross-border project management model adopted by the constructor and authorities enabled the facility to be completed efficiently and in strict compliance with Hong Kong legislation and standards.

It is the first infectious-disease center in the world that has built negative-pressure isolation beds by using modular integrated construction technology, in which free-standing integrated modules are prefabricated in a factory before being transported to construction sites for installation.

Equipped with 816 isolation beds and hospital-grade isolation facilities, the center provides intravenous medication and oxygen therapy, which can help alleviate the demand for isolation beds in public hospitals, Zhang said.

The construction, which normally would expect to take three to four years, was shortened to 120 days with workers working 24 hours a day and didn't stop even for typhoons or thunderstorms, Zhang said.

The hospital was officially handed over to Hong Kong authorities on Jan 20 - two days ahead of its original schedule.

Behind the completion were the efforts of thousands of workers both on-site in Hong Kong and at factories on the Chinese mainland.

The mainland factories also mobilized national resources to ensure the smooth construction of the project, and the number of factory workers during the peak period exceeded 2,500, Zhang said.

In one case, Zhang recalled that a Hong Kong truck driver, who was tasked with transporting free-standing integrated construction modules from a prefabricated factory on the mainland, couldn't even use a spoon during his lunchtime after his hands were worn out after he helped carry steel plates weighing about 80 kilograms from the factory to the truck.

He turned down help offered by his colleagues and said that now that he had a chance to contribute something to his country, he would do his utmost when his country needed him.

Zhang Jing, a 23-year-old doctoral student in building environment and energy engineering, said she was fascinated by the application of innovative construction technologies in the two medical facilities built by the mainland. She said she had only learned of these in textbooks before.

"It is so exciting to see that these new technologies can lead to such great outcomes," she said, adding that the successful application of these technologies has reinforced her faith in the development of the nation's construction industry.

Zang Xingyu, 25, another doctorate student in building environment and energy engineering, said he is more confident about China's construction industry after attending the lecture. "The various cases have proved the nation's strength and ability in the construction field. We should be more attentive to every project to prove that China's construction projects can be done quickly but also very well."