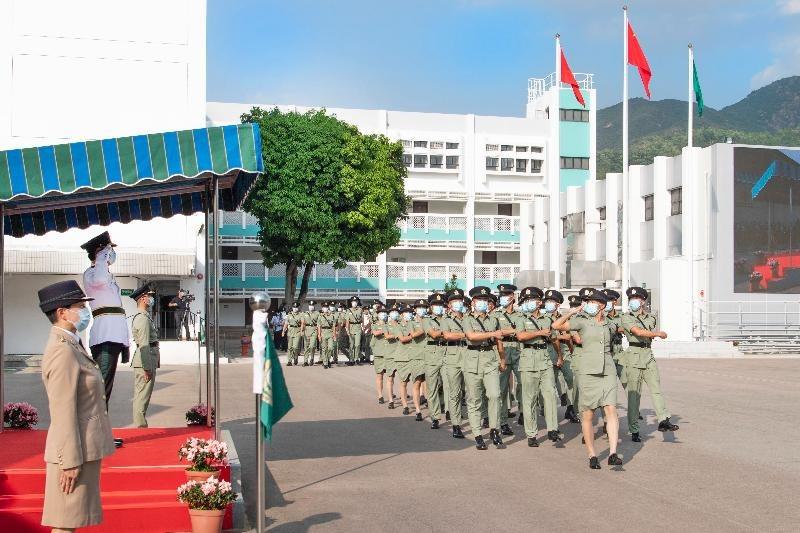 He said this has broken new ground in the passing-out parades of the Hong Kong disciplined services, which is particularly meaningful and encouraging.

Commissioner of Customs and Excise Hermes Tang Yi-hoi said that, apart from spreading a positive message to members of the public, the Chinese-style foot drill also adds “a vibrant color of patriotism to the city"

"The Chinese-style foot drill adopted by the disciplined services not only fully reflects our emotional attachment to the nation and deep love of our mother country, but also shows national sentiment and the proper manner of the disciplinary forces of the Hong Kong Special Administrative Region,” Tang was quoted as saying in the statement.

"The Chinese-style foot drill has long been a shining icon of our country in the international community. It is also a spiritual outlook that our 1.4 billion compatriots are proud of. Good practice of the Chinese-style foot drill helps in better integrating ourselves into the country's governance system and enriching the exercise of 'one country, two systems',” he added.

Tang said that, apart from spreading a positive message to members of the public, it also adds “a vibrant color of patriotism to the city".

Tang noted that Customs has developed from a 25-man Preventive Service to an elite force of almost 8,000 officers.

For a good understanding of the department's roles and responsibilities in safeguarding national security after the National Security Law came into effect, the security law has become a part of the induction courses for the Probationary Customs Inspectors and Probationary Customs Officers, Tang said.

The education firms up the officers' sense of mission and responsibility as a member of disciplined services in their safeguarding of the sovereignty, security and development interests of the nation, he added.

Talking about the challenges that Hong Kong encountered in the past two years, Tang said it is most fortunate for the city to have had the central government's timely combined move of implementing the National Security Law and improving the city's electoral system with the full implementation of the principle of "patriots administering Hong Kong".

Tang said hope has emerged again, fully reflecting that “our country always stands ready as the strongest, most solid and most unwavering backup for Hong Kong”.

"It is an honour and yet a grave responsibility to be a member of the Committee for Safeguarding National Security of the HKSAR. I have a particular deep feeling in holding the capacity and must express my sincerest gratitude to the central government," he said.

Tang pledged to proceed along the smart customs blueprint to facilitate the development strategies of the Belt and Road Initiative, the Outline Development Plan for the Guangdong-Hong Kong-Macao Greater Bay Area and the 14th Five-Year Plan. 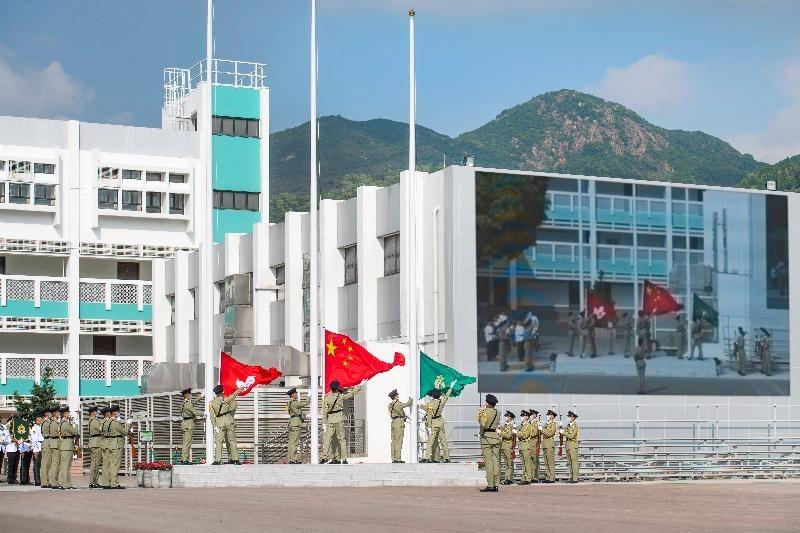 Members of the Customs and Excise Department Guards of Honour perform a Chinese-style flag raising ceremony to commence a passing-out parade at the Hong Kong Customs College on Oct 19, 2021. (PHOTO / HKSAR GOVERNMENT)