Singapore faces division, fear that come from living with Covid 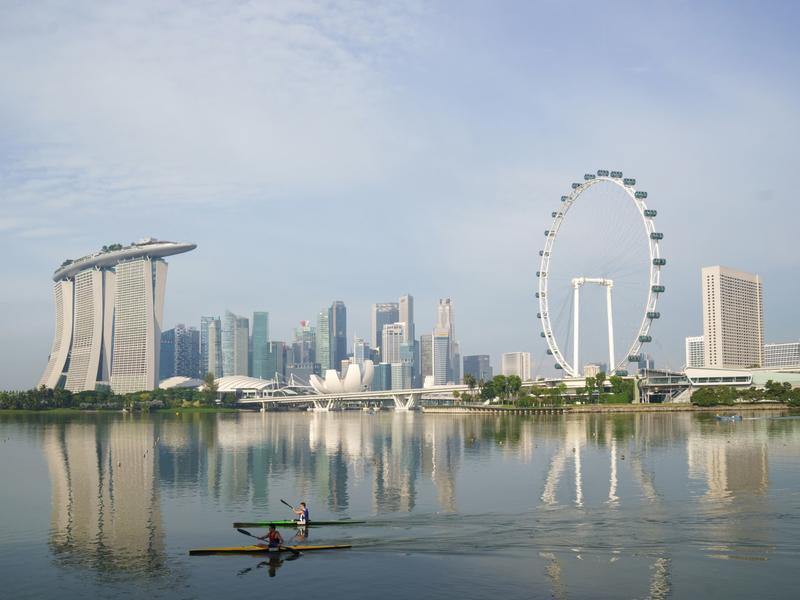 Paddlers row past the central business district, at Marina Bay in Singapore, on Sunday, October 3, 2021. (BLOOMBERG)

Just weeks ago, Singapore seemed like a poster child for pandemic management. With more than 80 percent of its population fully vaccinated and a road map in place for easing its strict Covid-19 rules, the city state seemed ready to live with the virus in a way that few countries were.

Then, infection rates began to soar.

Now, the island nation is looking more like a real-time illustration of how challenging the pivot away from a Covid elimination strategy is going to be. For other places that have taken a zero-tolerance approach to the virus -- such as China, Hong Kong and Australia -- it’s a valuable lesson.

For parts of Singapore’s own population, the shift has become a source of tension, division and fear that’s posing a communications conundrum for policy makers. 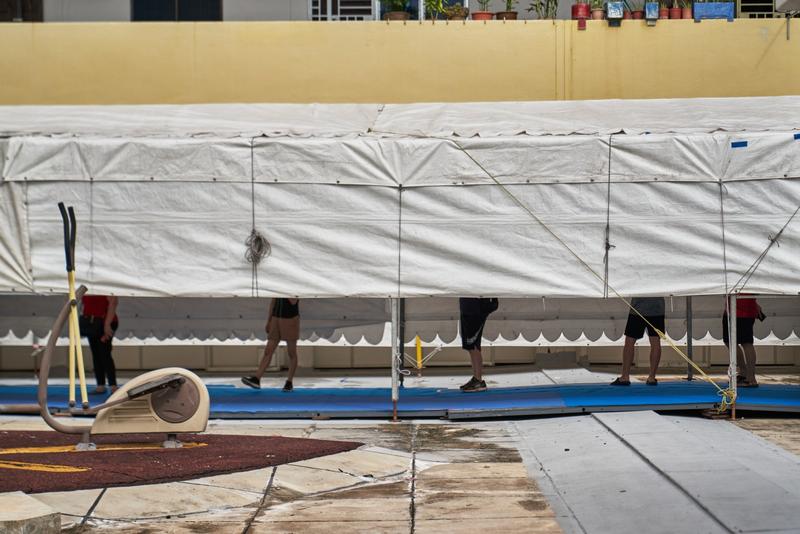 Members of the public wait in line outside a Covid-19 quick test center (QTC) set up in the Chinatown area of Singapore, on Tuesday, September 28, 2021. (BLOOMBERG)

Before September, fewer than 70,000 of the country’s 5.45 million residents had contracted Covid -- about 1.2 percent of the population. Cases now exceed 3,000 on some days, a genuinely alarming figure for many in a city that saw just 29 deaths in the virus’s first year.

While recent moves to reopen travel with the US and Europe have been cheered by expatriates, businesses and those sick of being confined to the tiny island, others are concerned things are moving too fast. Perceived mixed messaging from the government has only added to the polarization, spurring the prime minister to call for unity in a televised speech.

Frustration has been building for months as stop-start curbs around work and social interactions have been eased and then re-tightened, sometimes within a matter of weeks.

“I don’t envy the government,” said Jeremy Lim, associate professor at the National University of Singapore’s Saw Swee Hock School of Public Health. “It has to tread a very fine balance.” 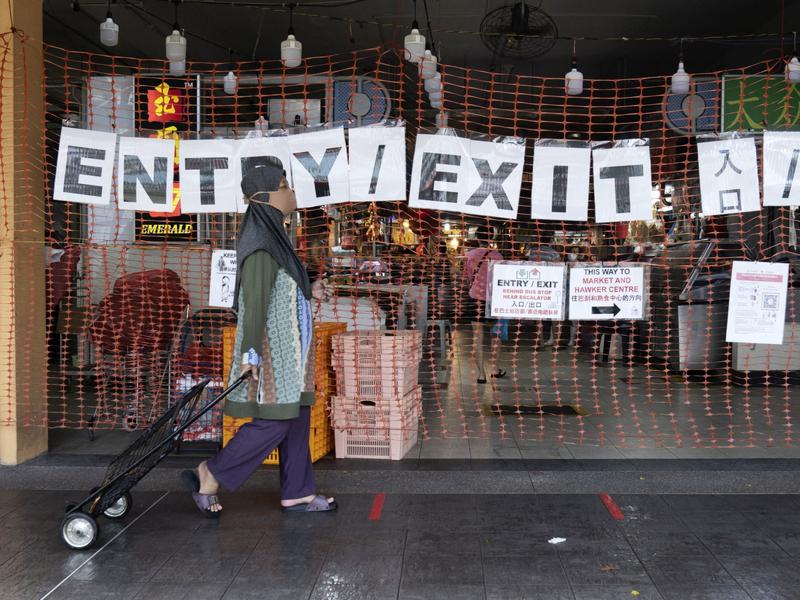 A sign directs customers to the entrance and exit points at a market in Singapore, on Saturday, September 25, 2021. (BLOOMBERG)

As the government’s message has shifted from a clear and successful policy of keeping the virus out to a halting lurch in the direction of reopening, public sentiment has been divided.

“We shouldn’t go ahead and reopen fully, not when we’re seeing 3,000 cases right now,” said Rozanah Mohd Shah, a 47-year-old housewife. She’s concerned for her elderly father, who is fully vaccinated but vulnerable, having previously suffered a stroke.

“No one really prepared us for this journey as we look to re-open, and no one is really trying to explain to us what it takes,” she said. “It has been a bunch of confusion.”

College student Koh Shao Ming, 24, also favors ongoing restrictions, especially in high-risk places like schools. But he’s “quite unhappy” with the government’s communication. “If the rationale behind certain policy decisions and strategies was clearly stated, explained and easily accessible, I believe there would be significantly less cynicism,” he said.

For members of the island’s large expat community -- many of whom moved there for easy access to capital markets and the rest of the region -- curbs on movement have been a particular frustration. Like much of Asia, Singapore closed its borders to most travelers. Strict quarantines, only recently eased for some, caught many cases at the border and helped to keep a lid on infections.

But limits on movement within the city are causing consternation too, especially given Singapore has one of the world’s highest inoculation rates. 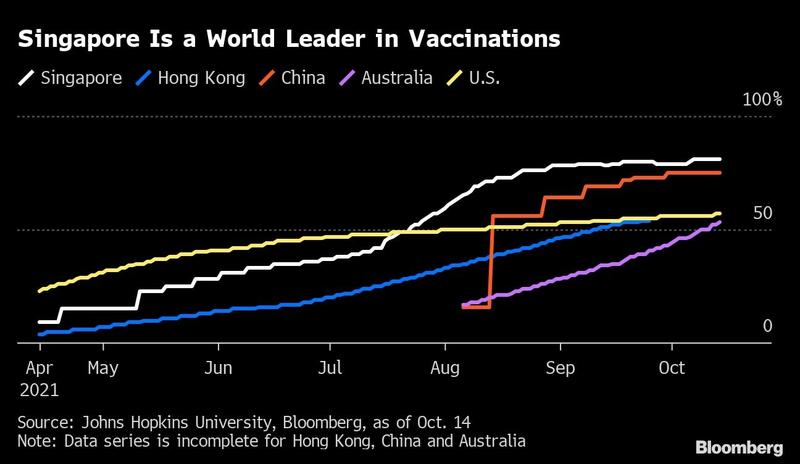 “The promise was when 80 percent of the population are fully vaccinated we will be reopening, so why are we closing up again?” said cafe owner Glen Ho. “The government has said it is a mild sickness already, why are we still restricting people?”

Singapore’s transition to accepting endemic Covid has, so far, been a halting one, in large part because it has been so effective at eliminating it.

An elderly resident waits to receive his Covid-19 vaccine at a vaccination site in Singapore, on Saturday, September 25, 2021. Daily infection levels have been ticking higher since the Singaporean government signaled a shift in its Covid strategy, from wiping out all cases to accepting the virus is endemic.

“For many, letting go of a successful formula is counterintuitive.”

In August, the government loosened restrictions, saying the city was in a stronger position to resume its reopening journey in a “cautious and calibrated way” -- then within weeks had moved back toward stricter curbs. As the latest surge took hold, officials stopped providing a breakdown of linked and unlinked cases in its daily reports, a decision that even the prime minister’s wife criticized publicly.

Singapore’s success at containment means most residents have little experience of the virus, said Jody Lanard, a medical doctor and a risk communications consultant in New York who has spent her career in international public health.

“The near-term future is going to be very frightening and there’s no real way to avoid that,” she said, adding that people shouldn’t try. “They’re going to have to go through a very rough time.” 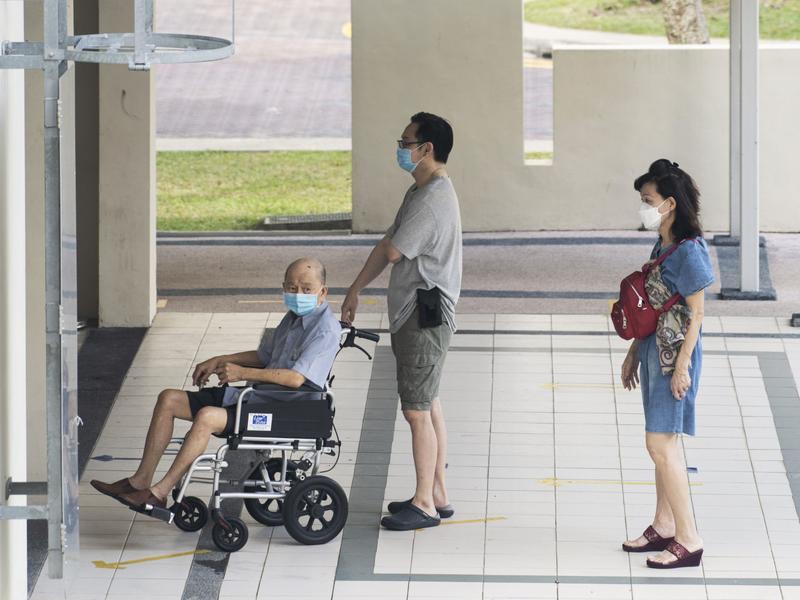 An elderly resident waits to receive his Covid-19 vaccine at a vaccination site in Singapore, on Saturday, September 25, 2021. (BLOOMBERG)

Singapore’s public hospitals are already experiencing the reality of living permanently with the coronavirus. Fear has residents inundating hospitals, even when their symptoms are mild, prompting authorities to expand a program allowing some patients with less severe cases to recover at home. More medical staff are being trained on ventilator procedures and wards have been converted to Covid treatment units.

Given the government’s strategy was inevitably going to lead to a rise in cases, some nurses say it should have moved faster and earlier. Officials say the surge in infections came much sooner than anticipated and that they dialed back on easing social distancing restrictions to better prepare the healthcare system.

One nurse at a private hospital described 14-hour double shifts and colleagues resigning due to stress -- Singapore’s first taste of the sort of chaos that emerged last year in the US and Europe. The nurse said she felt torn about the right strategy, but wished the government had been more decisive as frequent policy changes had only made the public’s anxiety worse.

Singapore is trying to do what no other nation has successfully done to date: Get through the Covid-19 pandemic without significant loss of life and safely reopen to the rest of the world. If it succeeds, its global reputation only stands to gain. The US and parts of Europe are now lifting mandatory mask rules and reopening borders and offices after many grim months, while Singapore’s immediate neighbors are also opening to some quarantine-free travel, but with far higher case numbers.Australia -- which lifted the 107-day lockdown in its most populous state on Monday and has some of the world’s tightest border curbs -- is also pivoting from its Covid elimination strategy. It’s likely to face a similar struggle to balance people’s desire for freedom with their sense of safety. The potential for backlash may well be what is preventing China and Hong Kong from shifting to treating the virus as endemic. 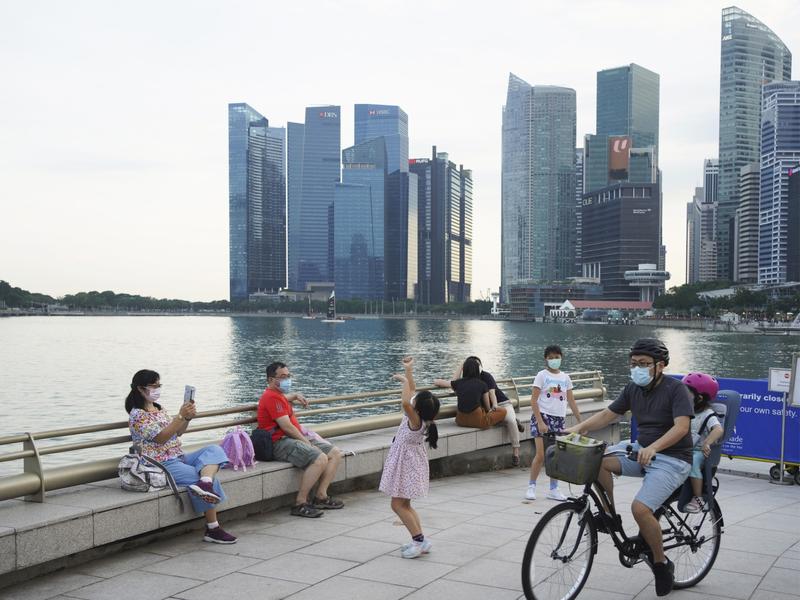 Paddlers row past the central business district, at Marina Bay in Singapore, on Sunday, October 3, 2021. (BLOOMBERG)

Fortunately for Singapore, the vaccines seem to be doing their job. While there have been breakthrough infections in the recent surge, hospitalizations and serious cases remain low. Fewer than 150 people have died from the virus since August, many of them unvaccinated older residents with other health conditions.

And there are signs that the government is finding its messaging rhythm.

This week, two ministers who had previously appeared to hold diverging views held a joint video question-and-answer session on pandemic strategy. More quarantine-free travel lanes were announced and close contacts of positive cases no longer have to isolate if home testing kits show a negative result.

In his televised speech, Prime Minister Lee Hsien Loong on Saturday urged residents not to be “paralyzed by fear” and to go about their daily activities “as normally as possible, taking necessary precautions.”

Afterwards, a survey by polling firm Milieu Insight found that support for the endemic Covid strategy increased by six percentage points to 29 percent, and the number of respondents who reported feelings of stress and frustration had dropped considerably from earlier in the month. Continuing to win more people over to living with Covid will be essential as the government begins to roll out booster shots.

“That Covid-19 will become endemic throughout the world, as it has in several countries, is a foregone conclusion,” said infectious diseases expert Ooi. Living with the pathogen “is thus not our choice, but one that has been decided for us by the virus.”