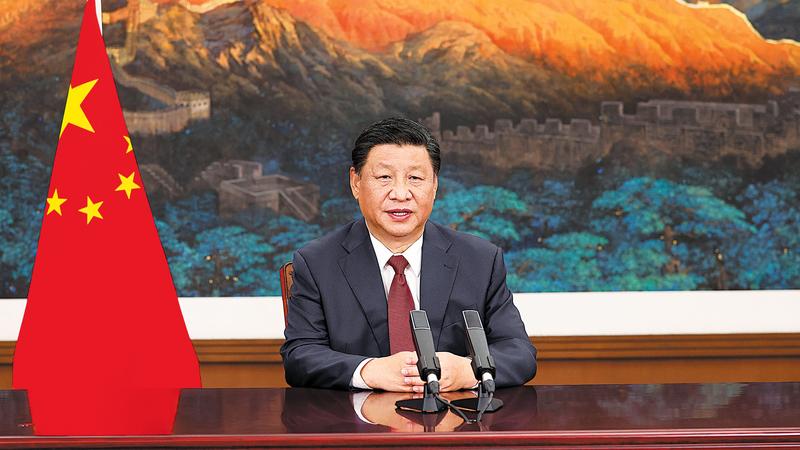 President Xi Jinping delivers a speech via video at the opening ceremony of the 2021 Zhongguancun Forum in Beijing on Sept 24. (HUANG JINGWEN / XINHUA)

Construction has started smoothly on the first phase of 100 gigawatts of generating capacity, Xi said via video link Tuesday at a United Nations Biodiversity Conference in Kunming. That’s more than the entire wind and solar capacity installed in India, according to BloombergNEF.

“China will continue to promote the adjustment of industrial structure and energy structure, vigorously develop renewable energy, and accelerate the planning and construction of large-scale wind and solar projects in desert areas,” he said.

Xi also announced the establishment of Kunming Biodiversity Fund with initial investment of 1.5 billion yuan ($232 million). The fund will be used to support developing countries in biodiversity protection.

“When we protect nature, it rewards us. when we exploit nature ruthlessly, it punishes us without mercy,” Xi said.

Xi urged efforts to let green transition drive people's efforts to facilitate global sustainable development, and called for stepping up green international cooperation to share the fruits of green development among all countries.

World leaders and negotiators are expected to hammer out a deal to arrest ecological destruction over the next decade at the delayed event.

Xi reiterated that China will release implementation plans to achieve carbon goals. His remarks came just over a year after he stunned the climate community by announcing that China, the world’s biggest emitter of greenhouse gases, would become carbon-neutral by 2060. Last month, he promised the country would stop building new coal projects overseas.

A recent energy crunch at home indicated China needs to overcome obstacles in executing the country’s path to carbon neutrality ahead of global climate talks, known as COP26, set to be begin on Oct 31 in Glasgow, Scotland.

The biodiversity summit, delayed by 17-months due to the coronavirus, is expected to outline what countries must do this decade to conserve natural habitats, cut plastic waste and pesticides and raise funds to help developing nations protect ecosystems. The sessions this week will largely be conducted virtually as a result of China’s stringent Covid-19 rules. The real negotiations won’t happen until next April.