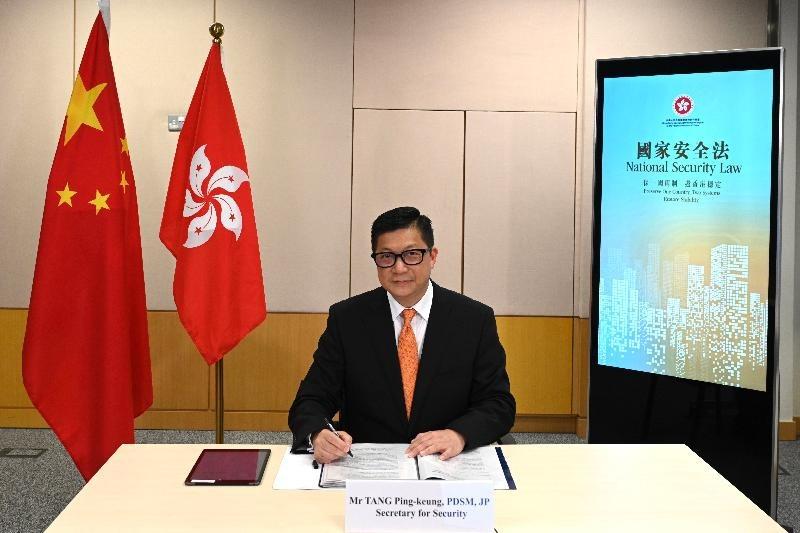 Secretary for Security Tang Ping-keung, delivers a speech at a side event webinar on the Hong Kong National Security Law at the 48th session of the United Nations Human Rights Council on Sep 23, 2021. (PHOTO / HKSAR GOVERNMENT)

GENEVA - A senior official from China's Hong Kong Special Administrative Region on Thursday told a webinar that things have continued to develop on a positive trend there, thanks to the Hong Kong National Security Law and the improvement to its electoral system.

Chris Tang Ping-keung, secretary for security of the HKSAR, said at the webinar organized by the Chinese Mission to UN at Geneva as a side-event of the on-going 48th session of the UN Human Rights Council that Hong Kong is now being back on the path of growth and prosperity.

"The recovery is evidenced by a drop in overall crime rate. In the first half of 2021, the total number of crimes decreased by around five percent when compared to the same period of 2020," he said.

Tang added that crimes including arson, wounding and serious assault, as well as criminal damage in Hong Kong have registered considerable drops ranging from 10 percent to 40 percent.

ALSO READ: No more doubt remains about necessity of NSL

"In fact, Hong Kong reassumes top positions in indexes concerning law and order, indicating that Hong Kong remains one of the safest cities in the world," he noted.

Tang further told the audience that Hong Kong's GDP in the first half of 2021 increased by 7.8 percent and the average daily turnover of the stock market increased by 60 percent, when compared to the same period of 2020.

However, the official warned that the stability could be short-lived "if we let our guard down".

"With the full implementation of the principle of 'patriots administering Hong Kong' and the Hong Kong National Security Law, the HKSAR government is now well equipped to prevent and suppress acts endangering national security, focus our attention and energy to address Hong Kong people's concerns in the social, livelihood and economic fields, achieve good governance for the public good, and make best use of the opportunities in the Greater Bay Area so as to ensure the continued prosperity of Hong Kong," Tang concluded.