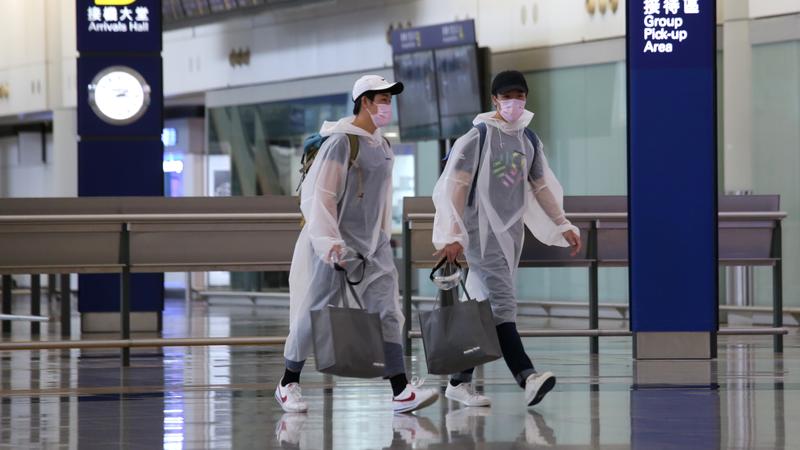 In a statement, the Department of Health said it also suspended Turkish Airline flights from Istanbul after one recent flight had three passengers who tested positive for COVID-19.

PAL flight PR 300 from Manila on Aug 27 also had three passengers who were confirmed to have the coronavirus. The affected Philippine Airline and Turkish Airline flights will be prohibited from landing in Hong Kong from Aug 29 to Sept 11.

The Department of Health also said that it has formally asked the police to investigate the the operators of the  vessels "Asia Energy" and "Thor Monadic" after they were suspected of providing false information to health authorities.

Fifteen of Thor Monadic’s crew had tested positive for the L452R variant on Aug 25.

According to the Centre for Health Protection, the new cases on Sunday involved a 68-year-old man who traveled from the United Kingdom, one man and two women who arrived from Turkey, and two women and one man who came from the Philippines.

Except for the man from UK, they all had no COVID-19 symptoms.

The CHP said the man, who had the L452R mutant strain, lives in Sunrise, Discovery Bay, Lantau Island and travelled to the UK on Aug 15.

He returned to Hong Kong on Aug 25 by flight CX252 and tested negative for the virus at the airport.

However, he was tested again on Aug 27 at a designated quarantine hotel and the results showed he was positive for the L452R mutant strain.

“The patient developed symptoms like cough, sore throat and running nose since August 25. Epidemiological investigation and contact tracing of the case is continuing,” the CHP said in a statement

It added that Sunrise building in Discovery bay and the places that the man visited will be included in a compulsory testing order.

The CHP said it was also investigating a “re-positive overseas case” involving a 29-year-old woman who had travelled to the UK, Spain and Portugal since the end of June and returned to Hong Kong on August 19.

The patient had received two doses of the Comirnaty vaccine on March 18 and April 8 in Hong Kong and she also tested positive for COVID-19 antibodies on June 23.

She stayed in a designated quarantine hotel from August 19 to 25 and then went home to 208, Shek O Village, Shek O after she finished her quarantine.

When she was tested again on Aug 27, the results showed she had the L452R mutant strain.

According to the patient, she developed symptoms in early August and tested positive for COVID-19 in Portugal. She underwent self-isolation and tested negative prior to departure in Portugal. She has been asymptomatic all along after returning to Hong Kong.

Her building and the places she visited during the incubation period had been included in a compulsory testing order.