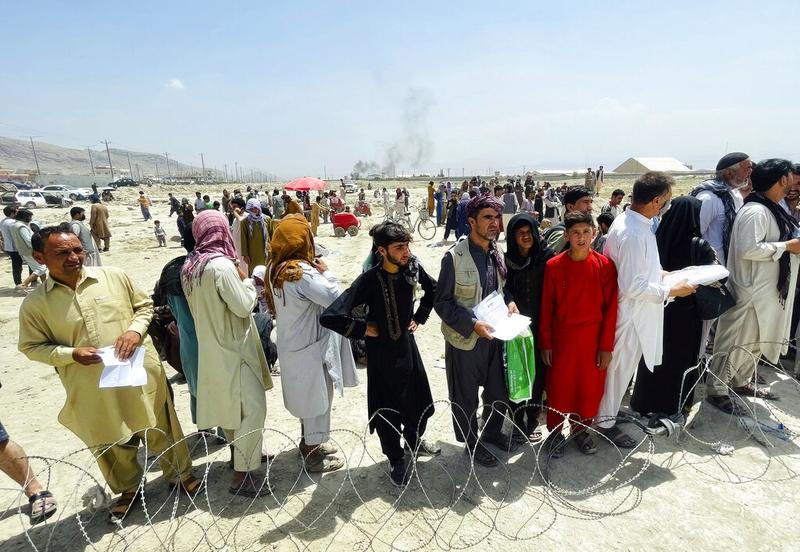 Hundreds of people gather outside the international airport in Kabul, Afghanistan, Aug 17, 2021. (AP)

KABUL - Taliban urged people in Afghanistan to live their routine lives on Tuesday, while Asian countries including Japan, Nepal, India and the Philippines have evacuated diplomats and citizens from the country, two days after the group took control of the Afghan capital.

The Taliban declared a general amnesty and called on people to live their normal lives with confidence. It urged government employees to return to work and women to join its government.

Taliban spokesman Zabihullah Mujahid tweeted that the situation in Kabul was completely under control, and law and order had returned to the city.

Taliban spokesman Zabihullah Mujahid tweeted that the situation in Kabul was completely under control, and law and order had returned to the city

Media reported that senior Taliban leader Amir Khan Muttaqi had held several rounds of talks with the Afghan leadership, and talks were going on on how the Taliban-led government could absorb new members beyond the Taliban and how the current rights could be preserved.

"All Monday night, huge planes were taking off or landing in the airport. The sound of four-engine military cargo planes could be heard from Monday night to early hours of the day (Tuesday)," he said.

The United States is taking charge of air traffic control at the airport for military and commercial flights as around 2,500 US soldiers are in Kabul to assist the evacuation of US personnel and others, according to reports.

Earlier on Tuesday, unconfirmed reports said Taliban officials suspended all flights in the airport. On Monday morning, all commercial flights from Kabul's airport were suspended amid a big rush of people at the airport.

A government official said an Indian Air Force (IAF) C-17 plane evacuated over 120 Indians, including diplomats, from Kabul and landed in the western state of Gujarat on Tuesday.

During the day, Japan has evacuated all personnel from its embassy in Kabul due to the possible deteriorating security situation in Afghanistan and established a temporary office in Istanbul for resuming the embassy's operations.

As many as 118 Nepalis arrived in the capital Kathmandu from Afghanistan via Kuwait on Tuesday, Nepal's Ministry of Foreign Affairs said.

Sewa Lamal, the spokesperson of the Nepali Foreign Ministry, said the Nepali government had made a request to various foreign governments having presence in Afghanistan for help in bringing out Nepalis.

The Department of Foreign Affairs (DFA) of the Philippines said 35 Filipinos had been evacuated from Afghanistan after it issued an alert level 4 "due to the uncertain security situation in the country" on Sunday.

Taliban spokesman Mujahid reiterated that the lives and properties of people were safe as there are reports that the Taliban has arrested about 200 people involved in the looting of government properties and vehicles. 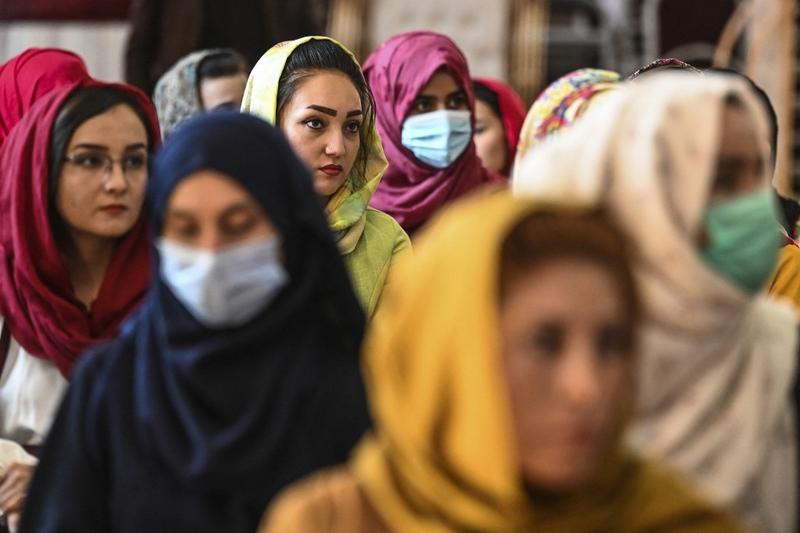 Afghan women take part in a gathering at a hall in Kabul on Aug 2, 2021 against the claimed human rights violations on women by the Taliban regime in Afghanistan. (SAJJAD HUSSAIN / AFP)

The Taliban leadership has ordered its members that "no one is allowed to enter anyone's house without permission. Life, property and honor of none shall be harmed but must be protected," Mujahid said.

Taliban members on Monday took control of the outside of Kabul airport while thousands of US forces were inside the airport helping to evacuate the crowds. At least 10 Afghans were reportedly killed in the stampede and shooting inside the airport within the past two days.

The offices of the Afghan Public Health Ministry and the Kabul municipality were reopened on Monday. Wahid Majrooh, acting minister of public health, appeared together with Taliban public health representatives in televised footage, urging medical workers including female medical employees to return to their jobs.

Small shops were also reopened around the city while banks and business centers mostly remained closed as of Tuesday morning.

Afghan President Mohammad Ashraf Ghani left the country on Sunday night, while the Taliban forces entered the capital of Kabul and took control of the presidential palace.

In its five-year rule from 1996 to 2001, when the US invaded following the Sept 11 terrorist attacks, the Taliban had ruled Afghanistan under an extremely conservative interpretation of Shariah laws

On Tuesday, the chief of field operations of the UN children's agency expressed cautious optimism about working with Taliban officials, citing their early expressions of support for girls' education.

The UN children's agency (UNICEF) is still delivering aid to most parts of the country and has held initial meetings with new Taliban representatives in recently seized cities like Kandahar, Herat and Jalalabad.

"We have ongoing discussions, we are quite optimistic based on those discussions," UNICEF's chief of field operations in Afghanistan, Mustapha Ben Messaoud, told a UN briefing, adding that 11 out of 13 field offices were currently operational.

ALSO READ: European leaders point fingers at the US after fall of Kabul

"We have not a single issue with the Taliban in those field offices."

In its five-year rule from 1996 to 2001, when the US invaded following the Sept 11 terrorist attacks, the Taliban had ruled Afghanistan under an extremely conservative interpretation of Shariah laws. Women were banned from working outside their homes and attending schools or colleges, required to have a male escort if they went out in public, and were expected to wear a burqa - a garment that covers the full face and body. Punishments for non-compliance included public stonings and executions.

UNICEF cited some Taliban local representatives as saying they were waiting for guidance from their leaders on the issue of educating girls, while others have said they want schools "up and running".

One Taliban health director in Heratwhere UNICEF is the only UN agency present had also asked female employees to report to duty, Ben Messaoud said. UNICEF had not yet established a direct communication with the Taliban in the capital Kabul, he added.

Rupert Colville, spokesman for Michelle Bachelet, the UN High Commissioner for Human Rights, said the worries of many Afghans about the Taliban were "thoroughly understandable".

"We call on the Taliban to demonstrate through their actions, not just their words, that the fears for the safety of so many people from so many different walks of life are addressed," he said.

Unlike many countries which are scrambling to evacuate their diplomats from the country, the United Nations does not plan staff evacuations and is appealing for additional aid for its operations amid warnings of growing humanitarian needs.