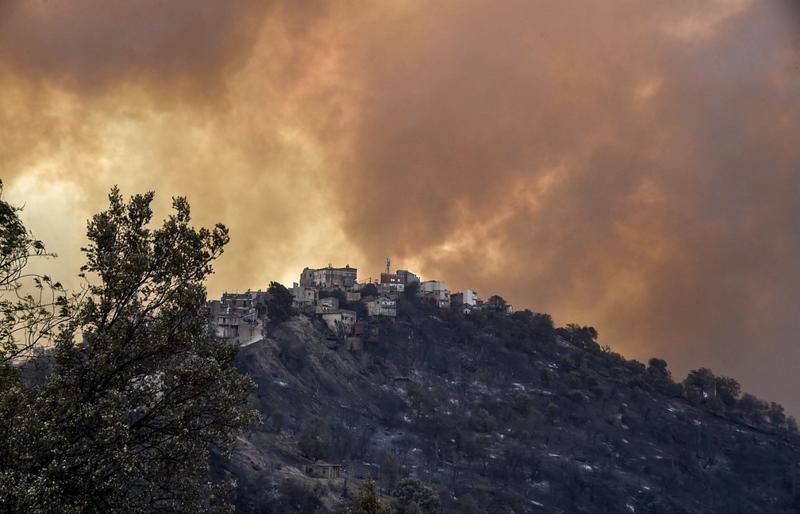 Smoke rises from a wildfire in the forested hills of the Kabylie region, east of the capital Algiers, on Aug 10, 2021. (RYAD KRAMDI / AFP)

ALGIERS - Forest fires in Algeria killed at least 65 people on Tuesday, including 25 soldiers deployed to help put out the blaze, the government said, as thick clouds of smoke covered much of the mountainous Kabylie region east of the capital.

The soldiers were killed in different areas, some while trying to extinguish the flames and others after they were cut off by the spreading fire, Kabylie residents said

Dozens of separate fires have raged through forest areas across northern Algeria since Monday night and Interior Minister Kamel Beldjoud accused arsonists of igniting the flames, without providing more details on the allegations.

"Only criminal hands can be behind the simultaneous outbreak of about 50 fires across several localities," he said.

Last week, a European Union atmosphere monitor said the Mediterranean had become a wildfire hotspot as massive blazes engulfed forests in Turkey and Greece, aided by a heatwave.

Residents of the Tizi Ouzou region in Kabylie used tree branches to try to smother burning patches of forest or hurled water from plastic containers in a desperate effort to douse the fire. 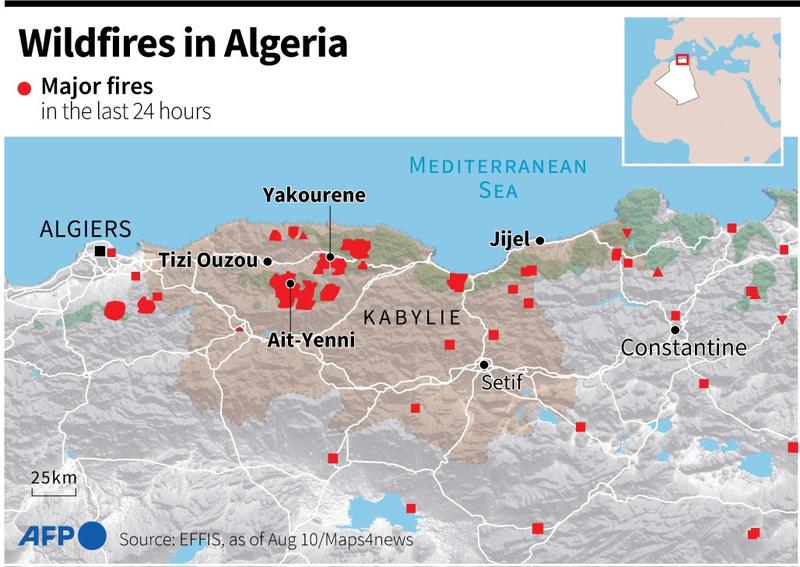 This AFP graphic shows a map of northern Algeria locating major fires in the last 24 hours.

The soldiers were killed in different areas, some while trying to extinguish the flames and others after they were cut off by the spreading fire, Kabylie residents said. The Defence Ministry said more soldiers had been badly injured with burns.

Several houses were burnt as families were escaping to hotels, youth hostels and university residences, witnesses said, adding that a dense smoke hampered the visibility of fire crews.

"We had a horror night. My house is completely burnt," said Mohamed Kaci, who had fled with his family from the village of Azazga to a hotel.

Firefighters and the army were still trying to contain the blazes, and Beldjoud said the priority was to avoid more victims. He vowed to compensate those affected.

Smaller fires have ravaged forests in at least 16 provinces of the North African country since Monday night.