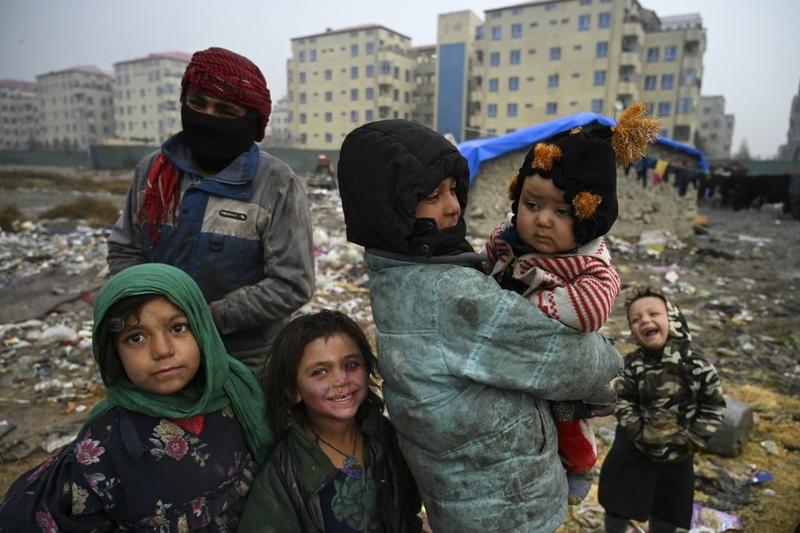 This photo internally displaced Afghan children stand outside their temporary mud house at a refugee camp in Kabul on Nov 23, 2020. (PHOTO / AFP)

The Biden administration is expanding a program to take in Afghans who face threats from the Taliban for having worked with the US since the 2001 invasion, announcing a plan to make it easier for people employed by American media and aid groups to apply for refugee status.

Citing a rise in violence by the Taliban as American forces leave the country, the State Department said Monday that the US will offer so-called Priority 2 status to a new category of Afghan citizens: current and former employees of American media outlets as well as for US-funded projects and nongovernmental organizations. Those who worked for the US for short periods can also apply.

People seeking refugee status under the expanded category will still find it hard to get. A senior State Department official, speaking to reporters on condition of anonymity, said their applications would be considered only after they flee Afghanistan, and processing could take 12 to 14 months. The official said the US currently wouldn’t be able to help them get out of the country though it’s reviewing all options.

The US currently doesn’t know how many people will be eligible for refugee status under the Afghanistan expansion beyond that the number is likely to be in the tens of thousands, the State Department official said

“This is incredibly hard, it is hard on so many levels,” Secretary of State Antony Blinken said at a briefing when asked about the requirement that people leave the country before getting help. “We have a special responsibility to these individuals. They stood with us and we will stand with them.”

Previously, the administration offered refugee status to Afghans who had worked directly for the US government -- mostly for the military and for a certain length of time -- under what’s known as the Special Immigrant Visa program. Their families are also eligible. But that didn’t address the many thousands of Afghans who face similar danger from the Taliban for their affiliation with other US entities.

In a statement, the State Department said the US still wants a “peaceful, secure Afghanistan” but that rising violence by the Taliban added to the urgency of the move.

Members of Congress have pressed for faster and expanded action to protect those at risk, and lawmakers last week cleared legislation with funding for that purpose.

“As we bring our troops home, it’s important not only to ensure the safety of Afghans who offered important assistance to our military but also to protect a broader set of Afghans who have helped further our goal of building democratic values in Afghanistan,” Senator Tim Kaine, a Virginia Democrat, said in a statement Monday.

“It’s a cop-out” said Matt Zeller, a fellow at the Truman Center and a retired Army major who served in Afghanistan. “These people don’t need more paperwork. They need an airlift.”

He said a similar, longstanding program for Iraqi refugees has more than 100,000 applications that would take 200 years to work through at the current rate.

The US currently doesn’t know how many people will be eligible for refugee status under the Afghanistan expansion beyond that the number is likely to be in the tens of thousands, the State Department official said.

The urgency of evacuating workers and their families rose after President Joe Biden announced in April that he intended to withdraw all US combat forces from Afghanistan before Sept 11. Last week, the first evacuation flight for some 200 Afghans who helped coalition forces arrived in the US as they await visa processing.

About 750 former American military assistants -- a group that also includes people who provided intelligence -- who are far along in the visa vetting process will travel to the US soon, officials said last week. With their family members, they’ll total about 2,500 people, according to Russ Travers, the senior deputy national security adviser.

Those whose applications aren’t as far along will be moved to a third country so they can be safe while their visa processing continues, said Tracey Jacobson, director of the State Department’s Afghanistan Coordination Task Force.