Rebalancing economy with science and tech 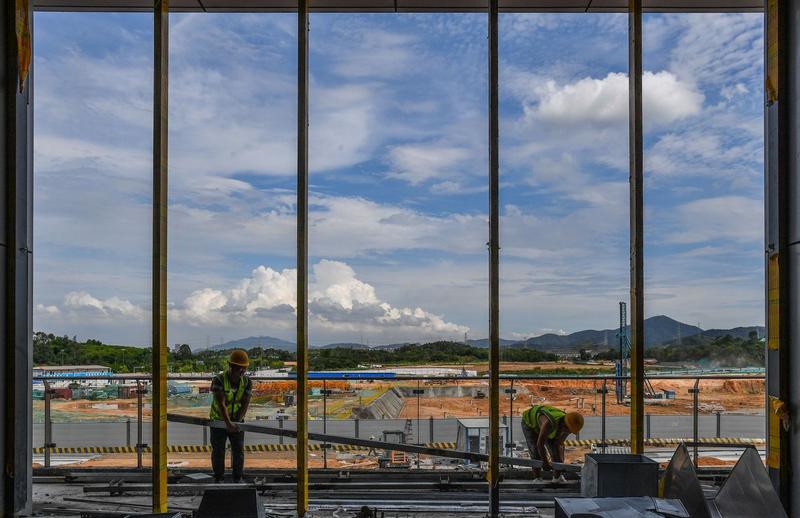 GUANGZHOU - Perhaps no other province (or state) in the world can match Guangdong in South China when it comes to blending finance, fiscal measures, science, technology, medicine and innovation to add tremendous value to both economy and society on a sustained basis, even during difficult periods like pandemics.

Consider this: Guangdong tops all provinces and autonomous regions of China in terms of local government spending on the development of science and technology. What's more, for the last four years, the province has been topping the list of regional innovation capabilities.

On a day when 35 C temperature caused the local meteorological department to issue the year's first summer heat alert, workers continued construction of the Guangzhou Respiratory Center, a national-level facility that, upon completion before the year-end, will be devoted to research in respiratory diseases.

The center is a project of the First Affiliated Hospital of Guangzhou Medical University. It will be the largest respiratory disease research, diagnosis and treatment center in Asia.

A project official traced the ambitious goal to the unprecedented shocks of the COVID-19 pandemic and, before that, the untold disruptions caused by the SARS epidemic about 20 years ago.

Without the government's funding, "it's hard to imagine that the project will finish on time," said Zhang Nuofu, deputy head of the hospital.

The sudden outbreak of the COVID-19 pandemic had delayed the construction of the center last year. On June 20 last year, the hospital applied for a special fund of 200 million yuan. It was issued in the form of special treasuries by the central government as part of a larger fiscal program to contain the spread of the then rampant novel coronavirus.

Just 10 days later, the bailout fund was delivered using a channel that directly transfers central government funds to primary-level governments and projects. The direct transfer was a big help in making unhindered payments toward construction fees and wages. The project received a second round of bailout fund of another 200 million yuan in December through the same route.

The medical field is one of the key areas that the Guangdong provincial government fosters by utilizing fiscal resources well.

The local government attaches great importance to the work of scientific and technological innovation with strong fiscal supports. It is planning to promote an international science and technology innovation center in the Guangdong-Hong Kong-Macao Greater Bay Area (GBA), said Yao Lu, deputy head of the Guangdong government's finance department. 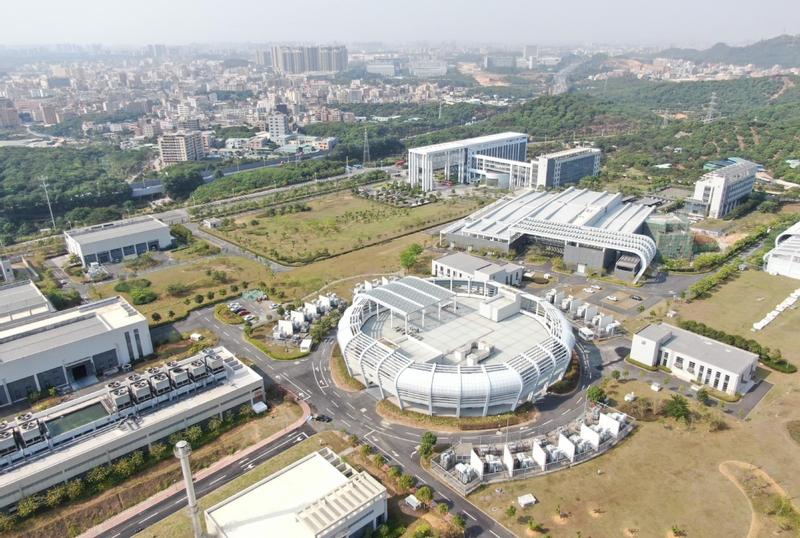 The government also guides enterprises in increasing their research and development investment, so that they truly become the primary vehicles of technological innovation, the ministry said in a document.

According to a 2020 report on the execution of budgets published by the Ministry of Finance, among the main expenditures in the central government's general public budget is the actual total spending on science and technology, which stood at 321.65 billion yuan, or 100.6 percent of the budgeted figure.

For this year, the spending target on science and technology is 322.71 billion yuan, roughly equivalent of the previous year's figure. The national spending, which includes local outlays, will rise by 3.3 percent, showed the government's budget report.

Over the past five years, government investment nationwide in science and technology increased at an average annual rate of 9 percent, and this field remains a key priority of fiscal expenditure in China's 14th Five-Year Plan (2021-25).

This year, the central government's expenditure on basic research will increase by 10.6 percent. Part of the funds will be used to support research institutes, scientific and technology innovation centers and talented personnel in the field of basic research, the Ministry of Finance disclosed.

"The accumulation of technology in basic research is crucial, and Guangdong is exploring new mechanisms of government-led investment to support this area," said Yao.

He said that within five years starting from 2019, the provincial government and the National Natural Science Foundation of China will jointly inject 800 million yuan into a fund to finance key technology innovative projects in the GBA.

To support scientific research projects in Hong Kong and Macao, the finance department of Guangdong has conducted cross-boundary fiscal fund transfers of more than 128 million yuan, a financing mechanism that will attract universities and research institutes to cooperate with Guangdong's technology development projects, the official said.

In 2020, the total budgetary expenditure in science and technology reached 95.1 billion yuan in Guangdong, China's highest, up from 74.3 billion yuan in 2016. The average annual growth rate of the expenditure was 10.8 percent, local government data showed.

Zhao Jinsong, an official from the Guangdong government's department of science and technology, said the fiscal funds can be used as a leverage to channel more private funds into key research and development projects.

"For instance, the measure has helped promote domestic substitution of chips and some software and break the monopoly in the production of some core components and materials." 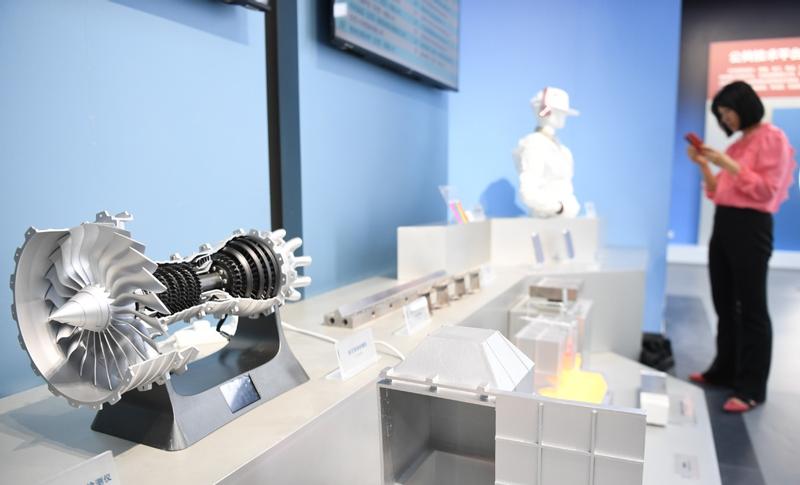 Models of products made with new materials are on display at Songshan Lake Materials Laboratory in Dongguan. (DENG HUA / XINHUA)

Since the outbreak of the COVID-19 pandemic, KingMed's labs completed nucleic acid tests of more than 65 million samples by the end of April, with a daily peak of about 96,000 samples, Liang said.

As KingMed has been recognized as a high-tech company, it enjoys the corporate income tax rate at a lower level of 15 percent, compared with 25 percent for general companies, and additional deduction for research and development expenses, Liang said.

Besides technological innovation, the country will support high-quality development of the manufacturing sector, with the aim of building independent, controllable, secure and stable industry and supply chains, the Ministry of Finance said.

During the annual sittings of the nation's top legislature and political advisory body in March, the ministry also announced that China would refund all due value-added tax credits to advanced manufacturing enterprises on a monthly basis.

The country would also refine the policy on insurance compensation for newly developed major technological equipment, and continue to launch trials offering insurance subsidies for initial applications of new materials, it said.

Some other measures include granting an extra tax deduction of 75 percent on enterprises' research and development costs, and raising this further to 100 percent for manufacturing enterprises, thus using preferential tax treatment to encourage greater investment in R&D.

A survey-based report published by Standard Chartered Bank in July indicated that manufacturers operating in the GBA showed a recovery, while the local government is expected to continually preserve jobs and support enterprises.

Many such social insurance payment reductions or relief windows have been extended to at least the end of this year. The province said it will continue to support financing for small and medium-sized enterprises, promote vocational training and assist job seekers.

In Guangdong, the provincial finance department has budgeted 10 billion yuan since 2018 to develop key technologies and industries in nine fields, including intelligent agricultural equipment, network and information security, and new materials, Yao said.

"Some key technologies and products now have independent intellectual property rights, which break the monopoly of foreign companies."

China has reached the goal of eradicating extreme poverty in rural areas, the central government announced earlier this year. During the 14th Five-Year Plan period, one of the country's objectives is to rebalance the economy toward a service-based, consumption-led growth model.

The country will also emphasize on technology, innovation and a move toward the decarbonization of the economy, said analysts.

"Focusing additional fiscal efforts on social spending and green investment rather than traditional infrastructure investment would not only help secure the recovery and bolster short-term demand, but also contribute to the intended medium-term rebalancing of China's economy," said Sebastian Eckardt, the World Bank's lead economist for China.