Iran warns of response if security threatened after ship attack 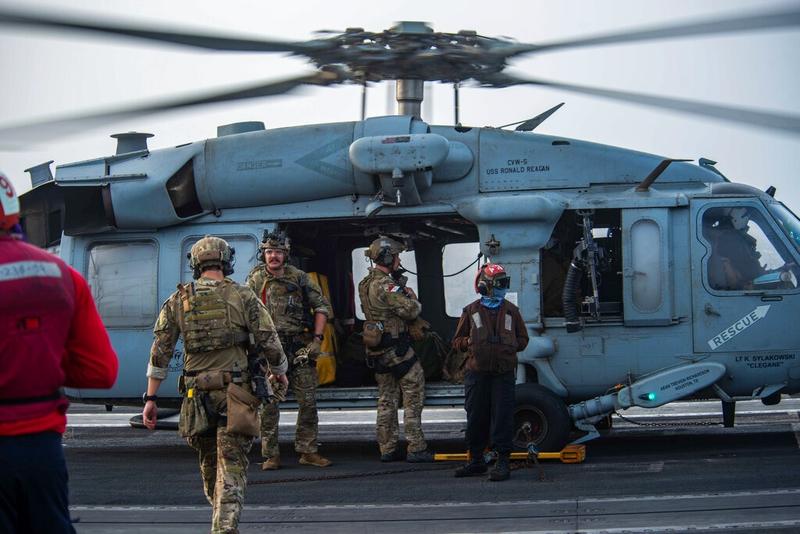 In this photo provided by the US Navy, sailors assigned to an explosive ordnance unit board an MH-60S Seahawk helicopter on the flight deck of aircraft carrier USS Ronald Reagan to head to an oil tanker that was attacked off the coast of Oman in the Arabian Sea on Friday, July 30, 2021. (MASS COMMUNICATION SPECIALIST 2ND CLASS QUINTON A. LEE / US NAVY VIA AP)

DUBAI - Iran will respond promptly to any threat against its security, a foreign ministry spokesman said on Monday, after the United States, Israel and Britain blamed Tehran for an attack on an Israeli-managed tanker off the coast of Oman.

Tehran has denied any involvement in the attack on Thursday in which two crew members - a Briton and a Romanian - were killed.

The United States and Britain said on Sunday they would work with their partners to respond to the attack on the Mercer Street, a Liberian-flagged, Japanese-owned petroleum product tanker managed by Israeli-owned Zodiac Maritime.

“Iran has no hesitation in protecting its security and national interests and will respond promptly and strongly to any possible adventure,” Iranian state television quoted Saeed Khatibzadeh as saying.

Iran has no hesitation in protecting its security and national interests and will respond promptly and strongly to any possible adventure.

Khatibzadeh “strongly regretted the baseless accusations made by the British foreign secretary against Iran, which were repeated by the US secretary of state in the same context and contained contradictory, false and provocative accusations”, state TV reported.

ALSO READ: Israel blames Iran for attack on tanker off Oman that killed 2

Britain said on Sunday it was highly likely that Iran carried out the attack, using one or two drones. The US Navy, which was escorting the tanker with the USS Ronald Reagan aircraft carrier, said on Saturday that early indications “clearly pointed” to a drone attack.

Israeli Prime Minister Naftali Bennett had accused Tehran of “trying to shirk responsibility” for the attack, and called its denial “cowardly”. Israel’s foreign minister said on Sunday the incident deserved a harsh response. 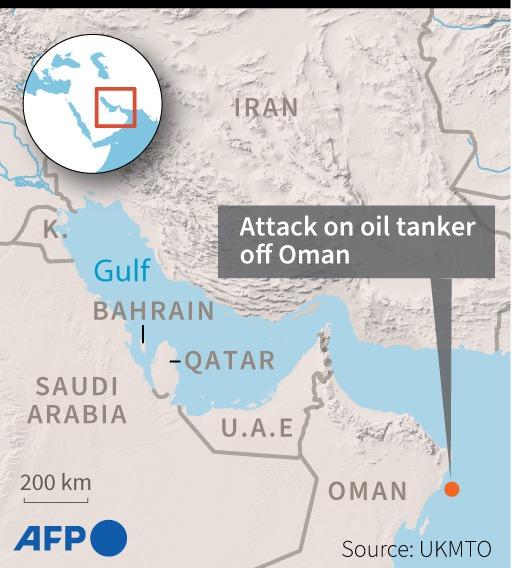 This AFP graphic dated July 31, 2021 shows the map locating an attack against an Israel-linked oil tanker off Oman.

However, an unnamed Iranian official told the country’s Nournews news agency earlier that Tehran considered “the threats of Western officials and the Zionist regime (Israel) to be more of a propaganda gesture”.

“And Washington and London will be directly responsible for the consequences,” the official told Nournews, which is close to Iran’s Supreme National Security Council.

Iran and Israel have exchanged accusations of carrying out attacks on each other’s vessels in recent months.

Opposition to Israel is a cornerstone of belief for Shi’ite-led Iran, which backs Palestinian and Lebanese Islamist militant groups opposed to peace with the Jewish state, which the Islamic Republic has refused to recognise since its 1979 revolution.

Tensions have increased between Iran and Israel since 2018, when then president Donald Trump ditched Tehran’s 2015 nuclear deal with six world powers and reimposed sanctions that have crippled the Islamic Republic’s economy.

Israel has voiced concerns about efforts by Tehran and US President Joe Biden’s administration to revive the nuclear pact, under which Iran curbed its sensitive nuclear work in exchange for lifting sanctions.