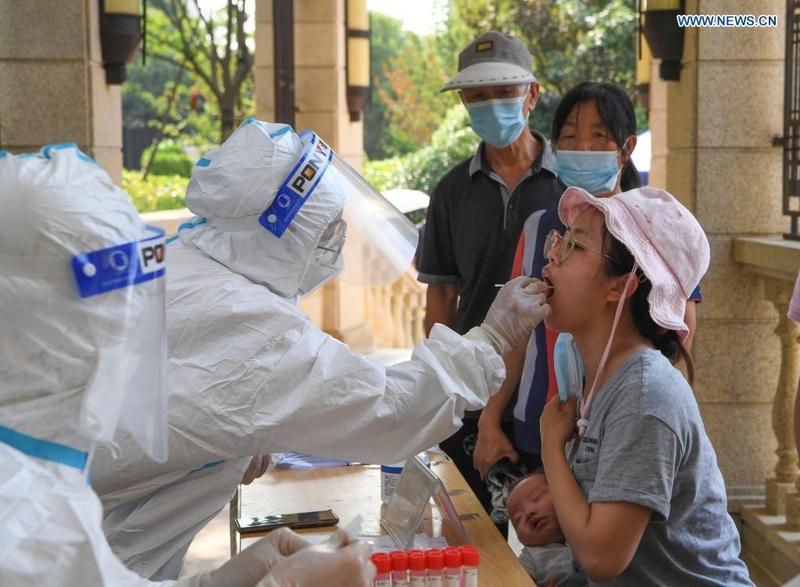 Of the fresh local cases, 40 were reported in Jiangsu, seven in Hunan, two each in Beijing and Hubei, and one each in Shandong, Henan, Hainan and Yunnan, according to the commission.

The mainland also reported 43 new imported cases, 16 of which were posted in Yunnan, four each in Beijing and Fujian, three each in Inner Mongolia, Jiangsu and Shaanxi, and two each in Shanghai, Shandong, Henan, Guangdong and Sichuan.

By the end of Sunday, the mainland had reported a total of 93,103 confirmed cases, including 87,376 recoveries. The death toll remained at 4,636

No new suspected cases or deaths related to COVID-19 were reported in the day, the commission said.

There were 1,091 patients still receiving treatment, 24 of whom were in severe condition, it said.

By the end of Sunday, a total of 7,475 imported cases had been reported with no deaths.

There was one suspected COVID-19 case on the mainland on Sunday.

More than 1.66 billion doses of COVID-19 vaccines had been administered across the mainland by Sunday, the commission said.

A recent cluster of COVID-19 infections have been linked to activities involving large gatherings at tourism attractions, performances or group travel, based on recent tracking information released by local health authorities.

A total of 777 tourists who attended shows at a theater in the Taohuayuan scenic area of Changde, Hunan province, are believed to be at high risk of coronavirus infection after one of the show's directors was confirmed with the virus, the scenic area's disease control and prevention center said

A total of 777 tourists who attended shows at a theater in the Taohuayuan scenic area of Changde, Hunan province, are believed to be at high risk of coronavirus infection after one of the show's directors was confirmed with the virus, the scenic area's disease control and prevention center said on Sunday. The tourists are required to report to their residential communities or local disease control and prevention centers immediately for testing.

The director, surnamed Zhang, took a sightseeing boat in Changde on July 24. To date, at least 17 people related to sightseeing boats have tested positive for COVID-19, including three from Chengdu, Sichuan province, 13 from cities in Hunan province and one from Yinchuan, Ningxia Hui autonomous region.

At least nine people associated with a show at another theater in the Wulingyuan scenic area in Zhangjiajie, Hunan province, have tested positive for COVID-19.

Group travelers are also at high risk of coronavirus infection. Five people in a group that visited Zhangjiajie have been tested positive for COVID-19. The infection of a tour guide was later confirmed. Two people in Jingzhou, Hubei province, who went to a railway station where the group had taken a train were later confirmed with COVID-19.

The seven were identified as migrant workers at the Wuhan Economic & Technological Development Zone, according to the zone's headquarters on COVID-19 prevention and control.

One of the workers, surnamed Tang, had waited at a train station in the city of Jingzhou, also in Hubei, where a tour group from Jiangsu was also waiting. Members of the tour group have tested positive for the virus. The other six reported cases are close contacts of Tang, the headquarters said.

Wuhan, once hard-hit by the COVID-19 epidemic, has not reported locally transmitted cases for over a year.

Zhao Ruixue contributed to this report.