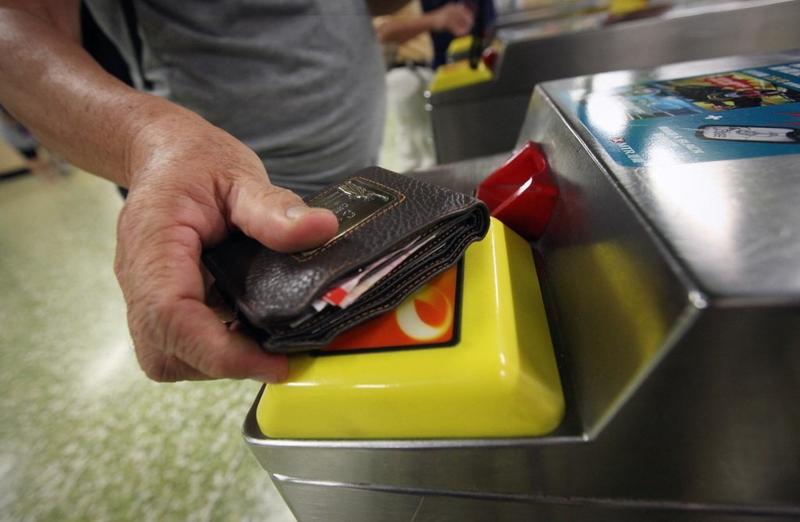 A man touches his wallet to an Octopus stored-value card reader as he exits a mass transit railway (MTR) station in Hong Kong on Aug 5, 2010.   (ED JONES / AFP)

HONG KONG – The Hong Kong government said it has disbursed the first HK$2,000 consumption voucher to about 5.5 million eligible people who had completed electronic registration by July 17.

For people who chose to collect the vouchers via AlipayHK, Tap & Go or WeChat Pay HK, the HK$2,000 vouchers have been directly injected into their specified stored value facility accounts, a government spokesman said in a statement.

The vouchers will be separated from the existing e-wallet in the account. When making payments, people only need to open the app and choose whether to use the vouchers and then pay as usual, the spokesperson said.

Those who chose to collect the vouchers via Octopus cards may collect the HK$2,000 voucher by tapping the card at the “subsidy collection points” of the Public Transport Fare Subsidy Scheme at MTR stations, Light Rail Customer Service Centres, designated piers and public transport interchanges. They could also collect the voucher at designated convenience stores and supermarkets, Octopus Service Points, or via Octopus app within three months from Aug 1.

The voucher will be combined with the value stored in the Octopus card.

People who have completed electronic registration on or after July 18 and all who have submitted paper registration forms will receive the first HK$2,000 consumption voucher on Sept 1 after verification of eligibility, according to the statement.

They also cannot be used for direct purchases from merchants located outside Hong Kong, person-to-person payments, or encashment.

The government spokesman reminded eligible people who have not yet registered for the vouchers to submit registration by Aug 14.