By Zheng Yiran in Beijing and Pei Pei in Shenzhen, Guangdong 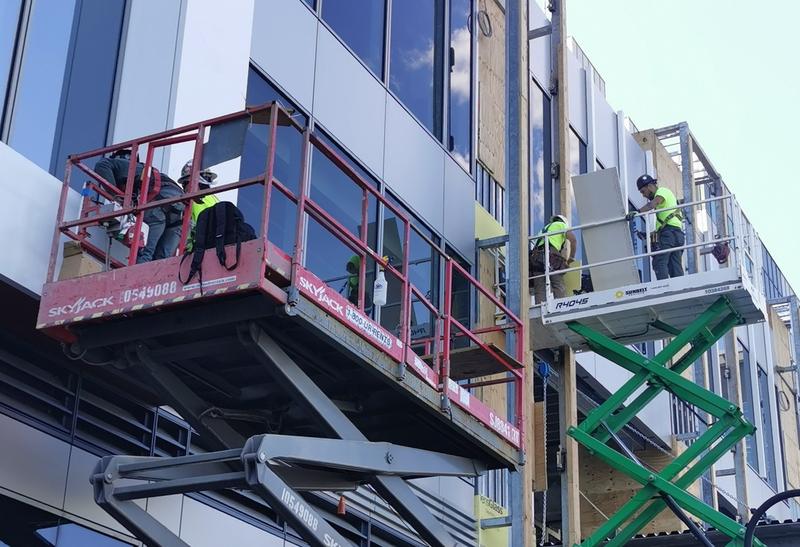 From the world's tallest tower, the Burj Khalifa in Dubai, the United Arab Emirates, to The Cosmopolitan of Las Vegas, a hotel in the United States, Chinese glass curtain walls are gaining ground in the global market.

The glass facades of these world-renowned buildings were all manufactured by the China State Construction Development Holdings Ltd. Now, the company's business covers Asia, Europe, North America, South America and Oceania. It has accomplished more than 310 projects from overseas markets including the United Kingdom, the US, Canada, the UAE, Singapore, Japan, Australia and Chile.

The company, established in Hong Kong in 1969, took advantage of Hong Kong as an international platform to actively explore and dominate the global market.

Between 2003 and 2011, the company undertook various overseas glass curtain wall projects, including Burj Khalifa, the world's tallest tower, and Torre Costanera in Chile, the highest building in South America. Later on, it marched into the North American and European markets.

Speaking of Burj Khalifa in Dubai, which is 828 meters tall, Wu Mingqing, vice-chairman, executive director and CEO of CSCD, said: "At that time, a Swiss company won the bid. However, it failed to pass the sample test, which made us take over the project."

He noted the company faced tough challenges in both systematic design and construction. The glass curtain walls of the tower needed to withstand wind speeds of 342 kilometers per hour, and that near the spire was faster than the velocity of sound at 1,224 km/h.

Moreover, there were huge temperature differences between indoors and outdoors in the desert in the Middle East, raising strict requirements for the heat-shielding performance of the glass curtain walls.

"In addition, we were required to finish the project in a very short period of time. However, with our concerted efforts, we managed to overcome all the difficulties and even completed the project ahead of schedule," Wu said.

The efforts were seen in CSCD's other projects overseas. For example, the company put a lot of careful thought in The Cosmopolitan of Las Vegas. As it is a high-end hotel, it made special designs in its glass curtain walls to ensure its soundproofing and fireproofing effect.

During the past 30 years, with China's rapid economic development and accelerated urbanization process, the country's glass facade industry realized leapfrog development. At the beginning of the 21st century, China turned into the largest producer and user of glass facades in the world.

Between 2015 and 2020, the output value of China's curtain wall industry surged from 340 billion yuan (US$52.6 billion) to 550 billion yuan, with a compound annual growth rate of 11 percent, the Shenzhen, Guangdong province-based Qianzhan Industry Research Institute said.

Qianzhan said with the explosive development of China's glass curtain wall sector, industry competition has turned more regular. Existing companies are better developed, and more and more newcomers are entering the sector, further promoting the development of the industry.

Qi Haishen, president of THE Solar Tech Co Ltd who is also an expert in construction, said: "Chinese glass curtain wall companies which eye the global market can take advantage of the Belt and Road Initiative and bring high-end glass curtain wall solutions to the outside world. Apart from material supply and construction, they need to give careful thought to design plans, environmental protection and building appearance, offering comprehensive solutions."

He said companies should also enhance global talent cultivation by hiring people who can speak English or local languages and are also equipped with professional skills and knowledge of international architecture laws and regulations. In this way, the management team is able to conduct international activities and build brand image overseas.

Speaking of the reasons why CSCD achieved success in the global market, Wu said the mature management team has brought good compliance capabilities to the company.

"We have our own overseas production bases and localized management teams, which enable us to make design and construction plans according to local conditions, so as to ensure timely and high-quality effectuation. In addition, we acquired core technologies in glass curtain walls and gained rich experience over the past years, which gave us advantages in global competition," he said.