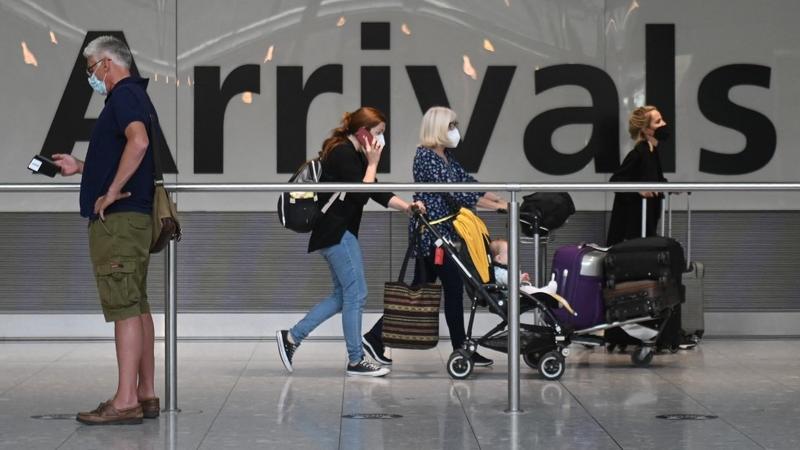 In this file photo taken on June 3, 2021 passengers push their luggage on arrival in Terminal 5 at Heathrow airport in London. (DANIEL LEAL-OLIVAS / AFP)

HONG KONG - The United Kingdom government has relaxed quarantine rules for travelers from Hong Kong as the financial hub reported no new COVID-19 infection on Thursday for the second time in one week.

Starting from Monday, travelers from Hong Kong to the UK will be exempted from quarantine given that they receive COVID-19 tests and have negative results before departure and after arrival.

The easing came as the UK authorities announced to move Hong Kong to the “green list” from the current “amber list” effective 4 am on July 19.

However, flights from the UK to Hong Kong remained banned as the European country is experiencing a flare-up in new infections. The UK recorded 42,000 new cases on Wednesday, the highest daily rise since mid-January.

The Hong Kong government also announced a ban on passenger flights from Frankfurt operated by Lufthansa German Airlines from Friday to July 29.

The latest announcement came after a passenger on flight LH796 was found with the virus through mandatory testing at the Hong Kong airport on Monday. Two other passengers on the same flight, meanwhile, failed to comply with the city’s anti-pandemic requirements.

The city’s advisory panel on COVID-19 vaccines recommended on Wednesday extending the storage limit for BioNTech shots after thawing from five days to one month. The vaccines should be kept at a temperature ranged from 2 to 8 degrees Celsius after thawing, the panel said.

The government welcomed the recommendation, saying that it would “enable greater flexibility for the storage, logistics and supply of the Comirnaty vaccine”. The Germany-made vaccine has been marketed under the name Comirnaty.