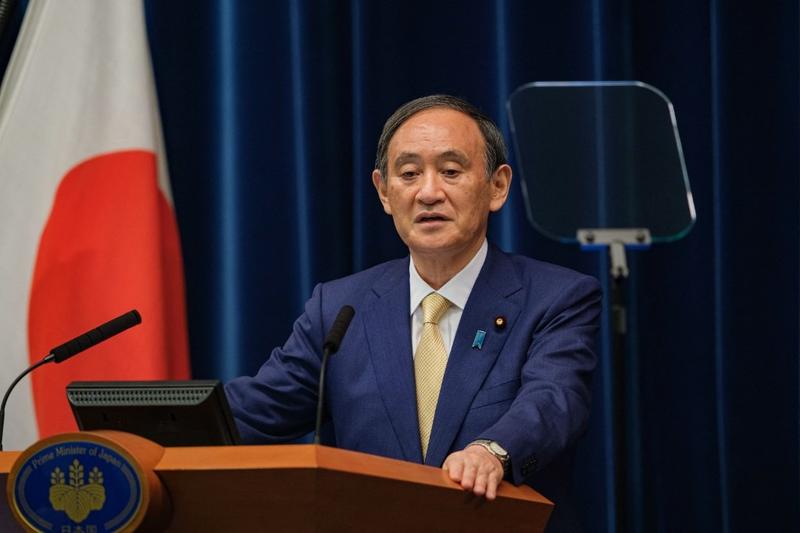 Japan's Prime Minister Yoshihide Suga speaks during a press conference on a new COVID-19 state of emergency stretching throughout the Tokyo Olympics, at the prime minister's official residence in Tokyo on July 8, 2021. (NICOLAS DATICHE / POOL / AFP)

Yoshihide Suga’s support rate hit a record low just days before the start of the Olympics, raising the political stakes for the Japanese prime minister who faces a general election soon after the games.

About 33 percent of respondents to a survey carried out by public broadcaster NHK between July 9-11 said they supported Suga’s cabinet, down four percentage points from the previous month. The survey came 10 days ahead of the Tokyo Olympics, which Suga needs to be held without major mishap to support his bid to avoid becoming a short-term leader.

Suga was teetering near what is referred to in Japanese politics as the “danger zone” of below 30 percent, when some past premiers have quit or been forced out. That’s an ominous sign since he must win a leadership vote in his ruling Liberal Democratic Party in September. A general election must also be held before late October, although a loophole could allow it to be postponed until November.

Suga came to office in September, boasting strong public support as he took over the final year of former premier Shinzo Abe’s term after he resigned citing ill health. Since then, Suga’s support has fallen over criticism of his coronavirus management and his decision to press ahead with the Olympics.

A separate poll by the conservative Yomiuri newspaper found 37 percent of respondents supported Suga. That figure slumped to 28 percent in Tokyo, where half of respondents said the games should be canceled. The capital on Monday was placed under a virus state of emergency that will last throughout the games.

Olympic organizers, local and national governments agreed last week to stage the games without spectators, a first in the history of the modern Olympics, which date to the late 19th century. About 39 percent of respondents to the NHK poll said the decision was appropriate, while 30 percent said the Olympics should be canceled.

Suga has said he wants to convey hope to the younger generation through the Olympics. With only about 18 percent of the population fully vaccinated, two-thirds of respondents to the NHK poll said they weren’t convinced of the event’s significance.