US slammed over visa rejection of Chinese students 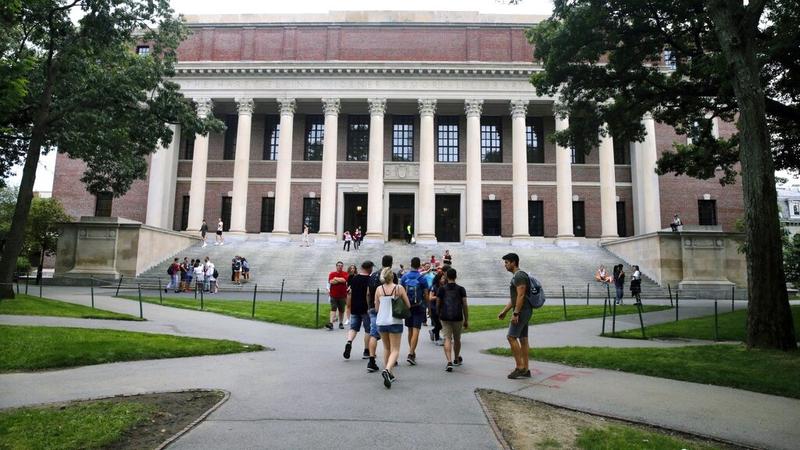 In this Aug 13, 2019 file photo, students walk near the Widener Library in Harvard Yard at Harvard University in Cambridge, Massachusetts. (CHARLES KRUPA / AP)

Due to the United States' visa restrictions, an increasing number of Chinese students have seen that getting accepted into top universities in the US is no guarantee that they will receive the education they had hoped to get.

Recently, more than 500 Chinese students who had received offers to pursue postgraduate studies as STEM majors (science, technology, engineering and mathematics) at US universities saw their hopes dashed when they were denied visas by the US government, sources say.

About a quarter of the students had been awarded US scholarships, and the vast majority of them submitted visa applications after the administration of President Joe Biden took office, sources familiar with the matter told China Daily on the condition of anonymity.

The visa restrictions "seriously damage the regular China-US people-to-people exchanges and education cooperation, and run counter to the US' self-proclaimed ideals, such as openness and freedom," Foreign Ministry spokesman Zhao Lijian said

The students had applied to pursue doctoral or master's degrees in the US, most of them with a focus on science or technology degrees in fields such as electrical engineering, computer science, mechanics, chemistry, material science and biomedicine, according to the sources.

The universities they planned to attend include Harvard, Yale, University of California Berkeley, Massachusetts Institute of Technology.

However, the US embassy or consulates in China rejected their visa applications as not being in compliance with Section 212 (f) of the Immigration and Nationality Act and Presidential Proclamation 10043.

This proclamation accuses the Chinese government of using overseas Chinese students to acquire sensitive US technologies and intellectual property, and it denies entry to those Chinese students and researchers who Washington defines as being connected to China's "Military-Civil Fusion Strategy".

Some of these students co-signed a letter urging the US government to end this discrimination and suppression targeting Chinese students.

With regard to the reported visa restrictions, China has expressed "serious concern" and has made serious protests to the US government, Foreign Ministry spokesman Zhao Lijian said on Tuesday.

Beijing urges Washington to "correct its mistakes, reconsider the visa applications for Chinese students to study in the US, stop using various excuses to willfully restrict and suppress Chinese students, protect their legitimate rights and interests and create a good atmosphere for China-US people-to-people exchanges and education cooperation", Zhao said.

The visa restrictions followed the bad example of former president Donald Trump's administration, and clash with Washington's comments about welcoming Chinese students for studies. They "seriously damage the regular China-US people-to-people exchanges and education cooperation, and run counter to the US' self-proclaimed ideals, such as openness and freedom", Zhao added.

This suppression of Chinese students and scholars has also prompted concerns in US educational and academic circles.

Since the Biden administration took office, there have still been cases affecting Chinese scholars and foreign students, sources familiar with the matter said

On June 10, the American Council on Education and other US higher education organizations publicly requested a briefing on the implications of Proclamation 10043 from the State Department.

As early as June 2019, China's Ministry of Education issued an alert on studying in the US in response to the Trump administration's policies targeting Chinese students.

Speaking to China Daily, the anonymous sources urged Chinese students and scholars planning travels to the US to "examine the recent series of outrageous moves by the US and get a clearer picture of the crux of the US government's policy, which is to step up suppression of China-US people-to-people exchanges".

Chinese students and scholars should "make an objective and rational assessment of ... visiting and studying in the United States so as to avoid unnecessary losses", the sources said.

After Trump signed Presidential Proclamation 10043 on May 29, 2020, Zhao Lijian, the Foreign Ministry spokesman, said "this action is stark political persecution and racial discrimination".

Since the Biden administration took office, there have still been cases affecting Chinese scholars and foreign students, the anonymous sources said.

These Chinese citizens faced situations such as denial of visa applications; prolonged body searches, interrogation and being repatriated after being denied entry at US airports; harassment during their stay in the US; and unjustified detention or interrogations by US national security authorities, the sources said.

Since the US embassy and consulates in China resumed operations for student visa applications in early May, Washington has attempted to look like it is responding to the wishes of US universities to attract a large number of Chinese students and secure tuition income, thus making the gesture of cooperating with China in education, the sources noted.

"But, on the other side, it continues the Trump administration's erroneous policy of suppressing Chinese postgraduate students and scholars in STEM majors and seriously violates the legitimate rights and interests of Chinese citizens studying abroad," they said.