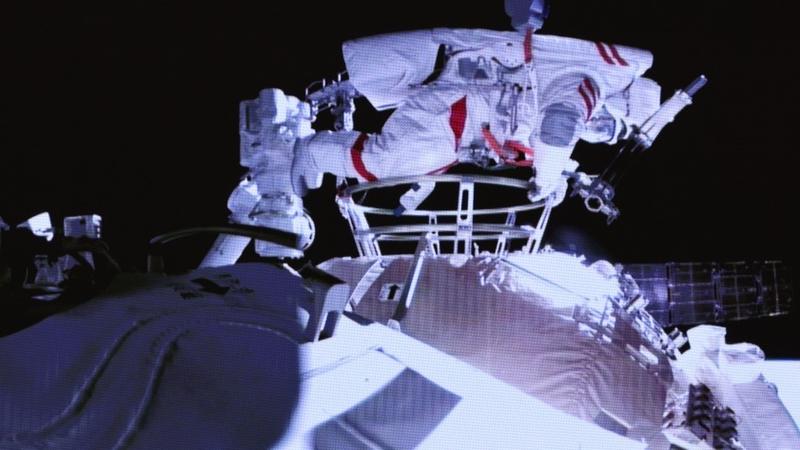 Two Chinese astronauts flew out of the core module of China's permanent space station on Sunday morning to carry out the country's first extravehicular activity, commonly known as spacewalk, in 13 years.

UP to 11:02 am, Major General Liu Boming and Senior Colonel Tang Hongbo floated out of the module, named Tianhe, or Harmony of Heavens.

Wearing the nation's new-generation extravehicular suit, the pair is tasked with using a large robotic arm to conduct several operations including installing equipment outside the spacecraft and moving the panoramic camera, according to the China Manned Space Agency.

During their spacewalk, Major General Nie Haisheng, commander of the mission, stayed inside the module and assist in manipulating the robotic arm, the agency said in a brief statement.

Ji Qiming, assistant director of the China Manned Space Agency, said that astronauts will carry out two lengthy spacewalks during the Shenzhou XII mission and use external mechanical arms to install equipment and check the Tianhe module's condition

The three-member crew has flown with Tianhe, the first and central component of the Chinese station, called Tiangong, or Heavenly Palace, for more than 16 days and will continue living and working there until the mid-September before returning to Earth.

Their spaceship was launched on a Long March 2F carrier rocket that blasted off on June 17 from the Jiuquan Satellite Launch Center in northwestern China. The astronauts entered Tianhe later that day after the spacecraft docked with the module, becoming the first occupants of Tianhe. Shenzhou XII, the nation's seventh manned space mission, is part of the Tiangong station program, which aims to complete a three-component station in a low-Earth orbit about 400 kilometers above the ground before the end of 2022.

At a meeting with reporters at the Jiuquan center one day ahead of their space journey, Liu said that compared with the extravehicular operation in the Shenzhou VII mission, spacewalks in the Shenzhou XII will be much longer and more sophisticated.

"And I believe that there will be difficulties and challenges. Therefore, we have undergone comprehensive, systematic and stringent training," he said. "We will strive to make every extravehicular task successful through our cooperation and with support from ground control." 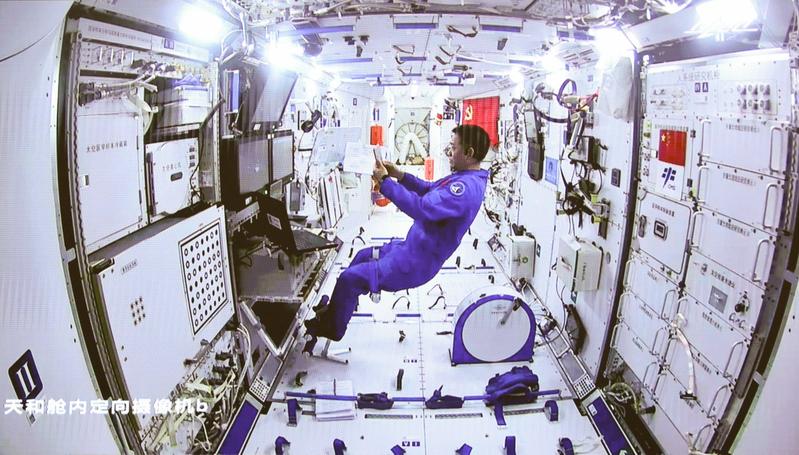 Chinese astronauts Major General Nie Haisheng, commander of the mission, is seen staying inside the module and assisting in manipulating the robotic arm that helps the other two astronauts with the extravehicular activities (EVAs). (PHOTO / XINHA)

Ji Qiming, assistant director of the China Manned Space Agency, said that astronauts will carry out two lengthy spacewalks during the Shenzhou XII mission and use external mechanical arms to install equipment and check the Tianhe module's condition.

Before Sunday, Chinese astronauts had conduct only one spacewalk, which was done by Liu Boming and Zhai Zhigang in the three-day Shenzhou VII spaceflight in September 2008. Another member in that mission -- Jing Haipeng – was in their spacecraft to control and monitor equipment.

During the operation, Zhai stayed out of the spacecraft for about 15 minutes while Liu moved the upper half of his body out of the craft for several minutes to assist Zhai.