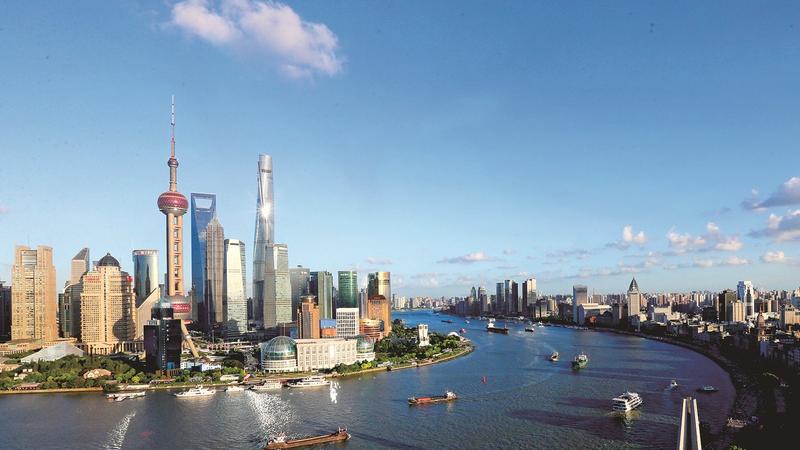 This undated photo shows a view of the Lujiazui area in Shanghai, East China. (PHOTO / XINHUA)

China's GDP growth is projected to reach 8.5 percent on a yearly basis in 2021, thanks to the pent-up demand and strong exports, according to the World Bank, which updated the economic forecasts in its regional economic report on Tuesday.

The forecast marks an upward revision by 0.6 percentage points from the World Bank's projections in December 2020, largely due to stronger-than-expected foreign demand, it said.

Private domestic demand is going to replace public investment and exports to become the prioritized driving force of China's recovery, thanks to the improved consumer and business confidence, as well as better labor market conditions, according to a report by the World Bank

The World Bank also predicted that China's year-on-year GDP growth may moderate to 5.4 percent in 2022, when the low base effects dissipate. It reflects the progressive de-risking and deleveraging efforts, policy normalization and diminished support from net exports.

The forecast figures remained unchanged from that in the bank's report of "Global Economic Prospects" issued on June 8 in Washington.

Private domestic demand is going to replace public investment and exports to become the prioritized driving force of China's recovery, thanks to the improved consumer and business confidence, as well as better labor market conditions, according to the new report.

Meanwhile, economists from the World Bank believe that the risk of high and persistent inflation is low in China and upside risks to consumer inflation seem limited at this point, although factory gate prices are sensitive to rising commodity prices.

In China, high upstream inflation partially translated into faster inflation in intermediate goods, but was barely visible in downstream consumer goods other than food, according to the report.

"As China's recovery consolidates, macroeconomic policies are expected to shift from accommodative to more neutral settings," according to Martin Raiser, World Bank Country Director for China. He suggested that the pace of "policy normalization" should be decided based on the economic data and the recovery process both in China and abroad.

Several challenges that China faces in the medium term include demographic headwinds, slowing productivity growth and a carbon-intensive production structure, the World Bank said in the report.

Sebastian Eckardt, World Bank Lead Economist for China, said that over the medium term, policymakers should "redouble their efforts" toward promoting growth-enhancing structural reforms and steering the economy to a greener, more resilient and inclusive development path.