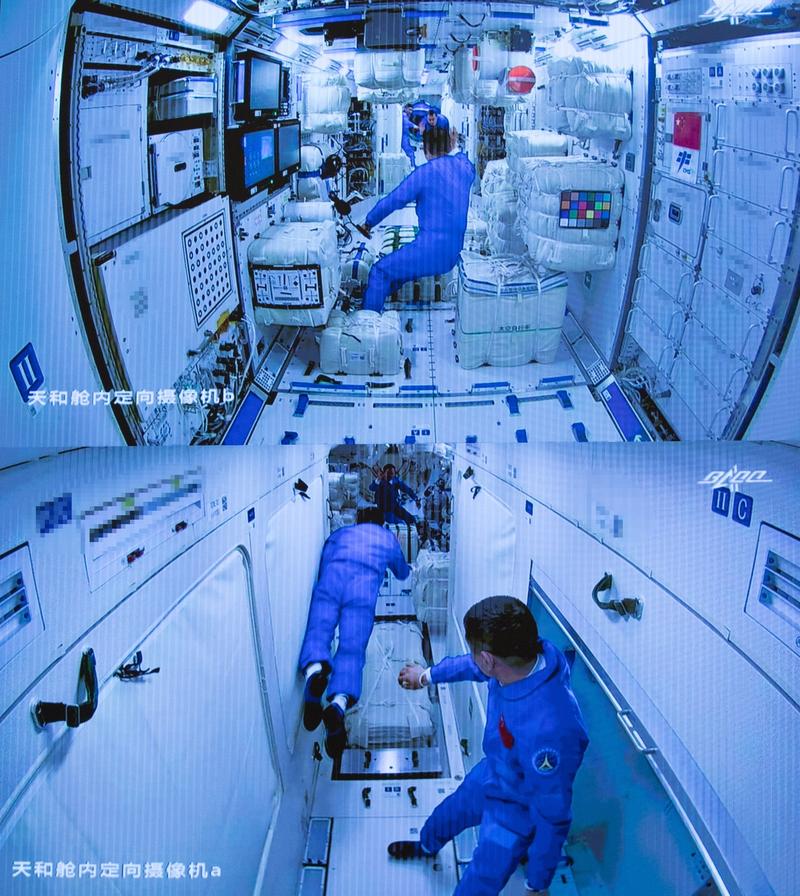 Astronauts enter the core module of China's space station from the Shenzhou XII spacecraft on June 17, 2021. The crew have started to prepare their orbiting residence for operations for the next three months. (PHOTO / XINHUA)

Astronauts on board the core module of China's space station have started to prepare their orbiting residence for operations over the next three months.

As soon as the three crew members－Major General Nie Haisheng, Major General Liu Boming and Senior Colonel Tang Hongbo－floated into the core module, named Tianhe, or Harmony of Heavens, on Thursday afternoon, they started to configure the electrolytic oxygen generators, install water tanks and arrange their sleeping quarters, according to the China Manned Space Agency.

After finishing these tasks, they enjoyed their first sleep on board the module, the biggest spacecraft China has built and the first and central section of the permanent space station, called Tiangong, or Heavenly Palace.

In the next few days, the crew will continue unpacking gear inside Tianhe, the core module of the space station, and the Tianzhou 2 cargo spaceship and arranging their living and work quarters. At the same time, the astronauts will conduct internal apparatus tests

After they woke up on Friday morning, Nie and his crew members started to unpack the Wi-Fi signal equipment and install and set the devices, the agency said in a news release.

Sun Jun, chief controller of the Tiangong program at the Beijing Aerospace Control Center, said that the Wi-Fi equipment inside the core module is connected through relay satellites with the ground control's communication network.

"It enables our astronauts to talk with their family members or colleagues or even make video calls," he said.

They also entered the Tianzhou 2 cargo spaceship on Friday to begin moving their living materials and mission payloads to the core module.

Tianzhou 2, the country's second cargo spaceship, carried 6.8 tons of supplies for Tianhe when it docked with it on May 29, including 2 tons of propellants, more than 160 packages of living and experimental materials as well as two extravehicular suits, each weighing around 100 kilograms, for astronauts to perform activities outside the core module.

In the next few days, the crew will continue unpacking gear inside Tianhe and Tianzhou 2 and arranging their living and work quarters. At the same time, the astronauts will conduct internal apparatus tests.

The crew was transported to Tianhe on Thursday morning in the Shenzhou XII spacecraft by a Long March 2F carrier rocket that blasted off from the Jiuquan Satellite Launch Center in northwestern China, embarking on the nation's seventh manned spaceflight, which will last three months.

The Shenzhou XII mission is part of China's ambitious space station program that aims at completing a three-component station in a low-Earth orbit about 400 kilometers above the ground before the end of 2022.

In the near future, three manned missions and three robotic cargo flights will be conducted for the station's construction. Two large labs will also be taken into space to link up with the station.