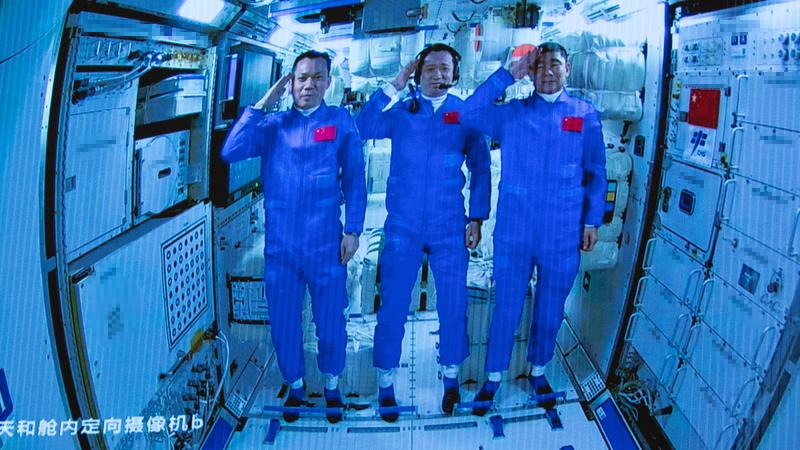 Three Chinese astronauts have entered the core module of China's permanent space station to embark on their three-month mission, becoming the module's first occupants and pioneers in one of the nation's grandest space endeavors.

Major General Nie Haisheng, Major General Liu Boming and Senior Colonel Tang Hongbo floated into the core module, named Tianhe, or Harmony of Heavens, at 6:48 pm on Thursday, after their Shenzhou XII spaceship linked with the module in a low-Earth orbit about 390 kilometers above the Earth at 3:54 pm.

They have begun to carry out their tasks inside the craft, which is the first and central section of China's space station, called Tiangong, or Heavenly Palace.

The all-male crew, from the People's Liberation Army Astronaut Division, was launched by a 20-story-tall Long March 2F carrier rocket, which blasted off at 9:22 am at the Jiuquan Satellite Launch Center in northwestern China's Gobi Desert.

After about 10 minutes, the vehicle put the 8-metric-ton spaceship into the orbit to rendezvous and dock with Tianhe.

General Xu Qiliang, a vice-chairman of the Central Military Commission and the highest-ranking uniformed officer in the Chinese military, and a host of senior officials watched the mission's launch at the Jiuquan center.

The three astronauts are tasked with testing and verifying plans, technologies and equipment for crucial elements of the Tiangong station's construction and operation, such as astronauts' long-term mission arrangements, life-support system, in-orbit resupply, extravehicular activity and spacecraft maintenance and repair.

The three astronauts are tasked with testing and verifying plans, technologies and equipment for crucial elements of the Tiangong station's construction and operation, such as astronauts' long-term mission arrangements, life-support system, in-orbit resupply, extravehicular activity and spacecraft maintenance and repair

They also will carry out other space tasks and experiments in Tianhe.

During the mission, the astronauts are scheduled to conduct two extravehicular operations, or spacewalks, to use mechanical arms to install equipment and check Tianhe's external condition.

Their work will enable the China Manned Space Agency to accumulate experience and check the capability, performance and compatibility of systems involved in the space station program to prepare for the next steps in its construction, according to Ji Qiming, the agency's assistant director.

The astronauts' host craft, the Tianhe core module, was lifted by a Long March 5B heavy-lift rocket at the Wenchang Space Launch Center in Hainan province on April 29.

Tianhe, the biggest and heaviest spacecraft China has constructed, is 16.6 meters long and has a diameter of 4.2 meters. The craft's weight, at 22.5 tons, is equal to the combined weight of 15 standardsize automobiles. It has three parts－a connecting section, a life-support and control section and a resources section.

The module is central to the Tiangong station's construction and operations, given that astronauts will live there and control the entire station from inside. It will also be used to host scientific and technological experiments.

The craft is now connected with the Tianzhou 2 robotic cargo ship, which was launched by a Long March 7 rocket from the Wenchang facility on May 29. The two craft docked with each other the next day.

Currently, Tianzhou 2 contains living materials and mission payloads for the Shenzhou XII crew to use, as well as propellants that will be used to refuel the core module.

Based on project plans, the Tianzhou 3 cargo ship will be launched in September to dock with Tianhe, and in October, another three-crew team will fly with the Shenzhou XIII to the module to stay there for six months.

In 2022, two large space labs will be launched to connect with the core module. Moreover, two manned missions and two robotic cargo flights will be made to continue construction of the Tiangong station, which is scheduled to be completed for formal operation to begin around the end of 2022.

One of China's most adventurous space endeavors, Tiangong will consist of three main components－a core module attached to two space labs－with a combined weight of nearly 70 metric tons. The entire station is set to work for about 15 years.

Upon its completion, Tiangong will be manned regularly by groups of three astronauts in periods lasting several months. During handovers to new three-astronaut groups, the station will accommodate up to six astronauts.

"First of all, they must be able to maintain good health, considering that a lengthy stay in a weightless environment will cause greater effects on the human body than short-term flight," Huang said. "They will face many adverse effects, such as strong vibration and loud noise, as well as the impact of rotation."

Astronauts must remain healthy and energetic to withstand and then adapt to such a tough environment and to fulfill their tasks, Huang said.

"Second, living and working long in the craft's small space, separation from family and familiar places, together with the unfavorable physical influences, can easily result in negative emotions like irritability and depression. Astronauts should have a strong mind and excellent psychological qualities to cope with those probable problems and to be capable of responding to possible emergencies," the trainer added.

Recognizing the challenges and heavy workload the crew members will face on their mission, program planners have tried their best to make the astronauts' living conditions as comfortable as possible.

According to Yang Hong, Tianhe's chief designer at the China Academy of Space Technology, the usable space in the Shenzhou series spaceship is about 7 cubic meters. By comparison, about 50 cubic meters is available inside the core module for occupants' living and work activities－much more room than in all previous Chinese crewed spacecraft. Once the two space labs are connected with the module to complete the Tiangong station, astronauts will have as much as 110 cubic meters of usable space, he said.

Zhang Hao, a senior engineer at the academy who took part in the module's development, said there are separate quarters inside the module for working, sleeping, personal hygiene, dining, healthcare and physical exercises. Each astronaut will have a bed and will share a dedicated washroom－a first for a Chinese spacecraft.

The crew's transporter, the Shenzhou XII spacecraft, is another example of technical advances achieved by Chinese designers. Compared with its predecessors, Shenzhou XII features the capability of conducting rapid rendezvous and docking operations, upgraded reentry technologies and higher accuracy in landing, designers said.

In addition to improved hardware, astronauts can also choose some entertainment in accordance with their personal preference, Huang said.

"They can watch movies, listen to music or use a telephone to chat with family members, friends or colleagues on the ground in their leisure time," she said.

The trainer also said that astronauts are allowed to bring a certain amount of personal belongings aboard Tianhe.

Astronaut Liu said before he set out on the space trip that he would take along a group family photo and a bull plush toy that symbolizes good luck in Chinese tradition.

Tang, another crew member on Shenzhou XII, said some video clips of his wife and son will accompany him during the three-month journey.

"My son is very lovely and optimistic. He is my pride," he said.

Nie refused to disclose details of the contents of his luggage, saying only that it includes some of his favorite food and things he will display to the public during the spaceflight.

On Oct 15, 2003, the country carried out its first manned spaceflight, sending Yang Liwei on a 21-hour journey around Earth in the Shenzhou V spacecraft.

Before Shenzhou XII, China had conducted six manned spaceflights, which totaled 68 days and orbited Earth 1,089 times, while 11 Chinese astronauts had traveled more than 46 million km in space and conducted more than 100 experiments.