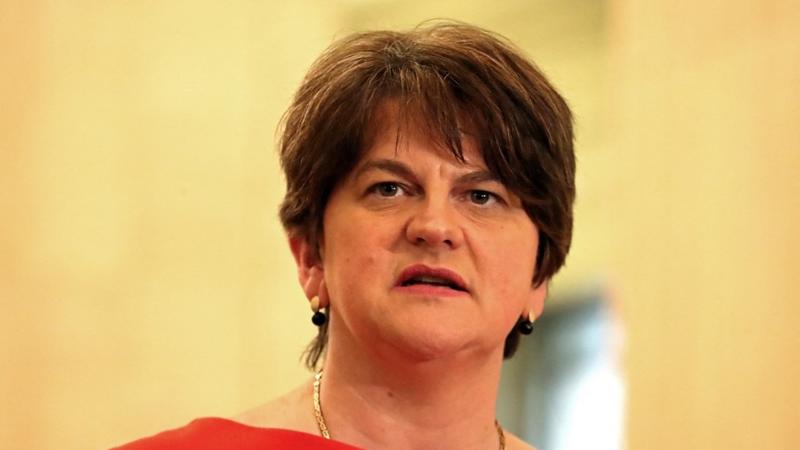 In this Jan 13, 2020 photo, Northern Ireland's First Minister, and Leader of the DUP, Arlene Foster speaks to members of the media in the Great Hall inside Parliament Buildings, the seat of the Northern Ireland Assembly, on the Stormont Estate in Belfast. (LIAM MCBURNEY / POOL / AFP)

Northern Ireland's biggest parties have up to seven days to agree to go back into government with each other after the Democratic Unionist Party's Arlene Foster formally notified the assembly of her resignation as the British region's First Minister on Monday.

The DUP is set to nominate social conservative Paul Givan to take over, but if the nationalist Sinn Fein refuses to nominate a deputy first minister, then the region's executive cannot function, and a snap election could follow.

Sinn Fein insist the nomination for first minister and deputy first minister be accompanied by the implementation of the cultural elements of the New Decade, New Approach deal which restored the power-sharing executive last year

Sinn Fein insist the nomination for first minister and deputy first minister be accompanied by the implementation of the cultural elements of the New Decade, New Approach (NDNA) deal which restored the power-sharing executive last year.

The agreement included protections for the Irish and Ulster Scots languages to be delivered in the form of amendments to the 1998 Act that established the devolved legislature after decades of direct rule from London.

The new leader of the DUP, Edwin Poots, told BBC Radio Ulster on Monday that he was "committed to all aspects of NDNA" but the Irish language provision cannot be a precondition to the selection of a first minister.

Sinn Fein's Conor Murphy, Northern Ireland's finance minister, responded with a call for the British and Irish governments to intervene as bilateral efforts to secure progress on the Irish language issue directly with the DUP had "run out of road."

"We want to continue the work of the executive and power-sharing, but this needs to be resolved," Murphy told journalists.

Foster, who took power in 2016, was ousted in April after a majority of DUP lawmakers signed a letter seeking a confidence vote after many blamed her for mishandling Brexit negotiations.

Foster resisted compromise on the terms of Britain's exit from the European Union when her party wielded huge power in propping up the government of former British Prime Minister Theresa May.

Her decision to throw her party's support behind May's successor Boris Johnson then backfired spectacularly when he broke the party's "blood red line" and agreed to Brussels' demand for trade barriers between Northern Ireland and the rest of the United Kingdom.

The resulting Northern Ireland Protocol leaves Northern Ireland within the EU's trading sphere, avoiding a hard border on the island of Ireland but infuriating pro-British unionists by undermining the region's place in the United Kingdom.