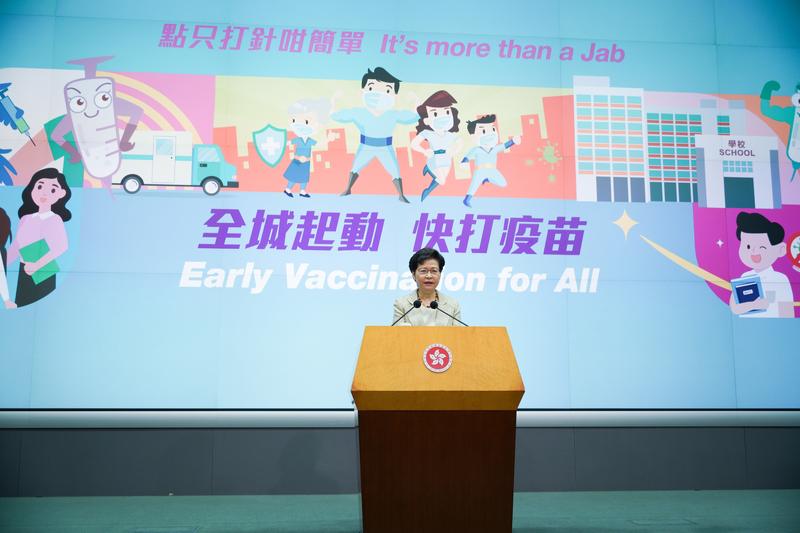 According to the latest list of quarantine hotels, 31 hotels across the city are providing a total of about 8,500 rooms for inbound travelers. However, bookings in July are nearing full capacity

According to the latest list of quarantine hotels, 31 hotels across the city are providing a total of about 8,500 rooms for inbound travelers. However, bookings in July are nearing full capacity.

Hong Kong was also expected to roll out a program in late May that would have allowed residents in Guangdong to come to the city without being quarantined, but Lam said the program has to be put on hold due to outbreaks in Guangzhou.

As the city’s vaccine take-up rate gradually increases, Lam thanked the business sector for offering rewards worth of HK$180 million (US$23.19 million) in total to boost the vaccination drive.

Lam said that the city needs to build herd immunity as soon as possible to facilitate the resumption of travel and social activities, appealing again to residents to take the jabs.

The Centre for Health Protection said in a statement that the imported cases on Tuesday involved two women, aged 39 and 28, who both flew in from Indonesia. The older woman was asymptomatic while the other patient started showing symptoms on Monday.

In a separate statement, the Hong Kong government said stricter quarantine measures will be imposed on travelers from Indonesia starting next week in response to the epidemic situation in the country.

The CHP said it was also investigating the case of a 38-year-old woman who tested positive in Huizhou, a city in Guangdong province, after she arrived there from Hong Kong on May 31.

According to the CHP, the woman was actually a recovered COVID-19 patient.  She was confirmed infected in mid-February but was discharged from the hospital on Feb 26 after her recovery.

READ MORE: HK reports no new COVID-19 cases for 1st time since May 30

The CHP also said that it was continuing its investigation into the untraceable infection of a 17-year-old girl with the Alpha virus variant.

An “environmental sample” from a food package at the house in Tin Shiu Wai where the girl lived with her sister and mother tested positive for the virus, the CHP said. The girl’s mother and sister were also earlier confirmed to be infected with the Alpha variant.