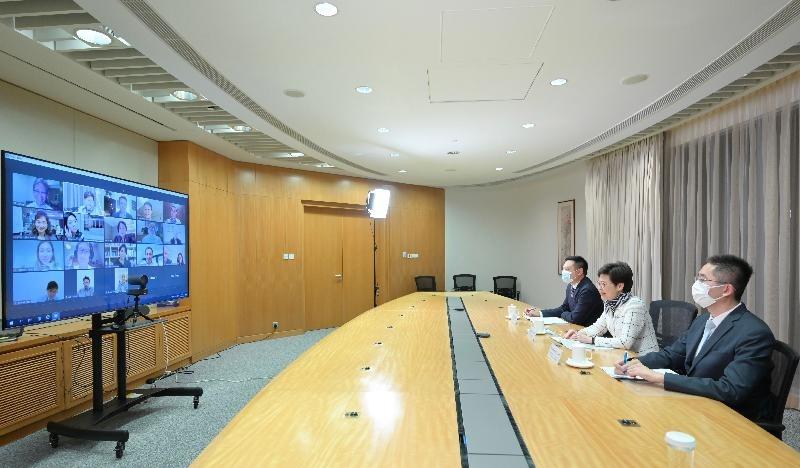 Chief Executive Carrie Lam Cheng Yuet-ngor (centre) met with representatives of mainland and overseas art galleries at a webinar on June 7, 2021 to brief them on Hong Kong's competitive edge as an international arts and cultural hub. Looking on are Secretary for Home Affairs Caspar Tsui Ying-wai (left) and Under Secretary for Commerce and Economic Development Bernard Chan Pak-li (right). (PHOTO / HKSAR GOVERNMENT)

HONG KONG - Chief Executive Carrie Lam Cheng Yuet-ngor on Monday night met with representatives of mainland and overseas art galleries via a webinar and promoted the Hong Kong Special Administrative Region as a mecca for culture and the arts.

In a statement, the government said Lam briefed the gallery representatives on the HKSAR's growing competitive edge as an international arts and cultural hub, and that it is the best time for them to expand their presence in the city.

Secretary for Home Affairs Caspar Tsui Ying-wai and the Under Secretary for Commerce and Economic Development Bernard Chan Pak-li also joined the webinar.

The webinar was organized by Art Basel, with which the Chief Executive has had close interactions over the years since Art Basel Hong Kong was hosted in the HKSAR some eight years ago

The webinar was organized by Art Basel, with which the Chief Executive has had close interactions over the years since Art Basel Hong Kong was hosted in the HKSAR some eight years ago, according to the statement.

Apart from Art Basel senior executives, including its global director Marc Spiegler, the webinar was also attended by a dozen directors and founders of art galleries in major cities around the world, including New York, London, Paris, Rome, Milan, Athens, Tokyo, Seoul, Singapore, Jakarta and mainland cities such as Beijing, Shanghai and Guangzhou.

Lam said Hong Kong has all along been an East-meets-West hub for international arts and cultural exchanges.

The Leisure and Cultural Services Department (LCSD) had also signed MOUs with world-renowned museums such as the British Museum and the Gallerie degli Uffizi to strengthen ties and cultural exchanges.

"The professionalism and passion of Hong Kong's museums are well recognized by the community of collectors and artists. In addition, Hong Kong is blessed with a rich private collection; many of the collectors are supporters of our public museums," Lam said.

"I am honored and thrilled to receive on behalf of our public museums two remarkable donations from Chih Lo Lou Art Promotion Ltd and the family of celebrated artist Wu Guanzhong in 2018."

Lam noted that Hong Kong has been investing heavily in upgrading existing cultural hardware and building new facilities. The M+ Museum and the Hong Kong Palace Museum in the West Kowloon Cultural District, which are expected to be commissioned at the end of this year and in the middle of next year, respectively, together with the renovated and expanded Hong Kong Museum of Art, will be cultural landmarks by the Victoria Harbour.

The HKSAR also has a host of museums managed by the LCSD, Tai Kwun - Centre for Heritage and Arts, the PMQ as well as prime Hong Kong exhibition venues, including the Hong Kong Convention and Exhibition Centre and AsiaWorld-Expo.

Coupled with the recent efforts of private developers to enhance artistic elements in their properties, members of the public are now able to sample a rich and colorful diversity of arts and cultural activities all around Hong Kong.

And on top of the first-class arts and cultural venues, Hong Kong has a vibrant art scene and plays host to a number of large-scale and well-received annual international art fairs, including Art Basel Hong Kong, Art Central and the French May Arts Festival, attracting plenty of art lovers and members of the public on a yearly basis, Lam said.

She pointed out that the HKSAR's position will be further boosted by the "Outline of the 14th Five-Year Plan for National Economic and Social Development of the People's Republic of China and the Long-Range Objectives Through the Year 2035" approved by the National People's Congress earlier this year, in which Hong Kong is encouraged for the first time to develop into a hub for arts and cultural exchanges between the mainland and the rest of the world.

Lam said it echoed the directions of the Culture and Tourism Development Plan for the Greater Bay Area promulgated in December 2020, which indicated support for Hong Kong to develop into a more competitive global platform for cultural exchanges.

"Given Hong Kong's competitive edge and bright prospects in art and cultural development, and the recent drop in rentals in the commercial property market amid the epidemic, I believe that it is the best time for international art galleries and world-renowned artists to expand their presence in Hong Kong. I welcome you all with open arms," Lam said.