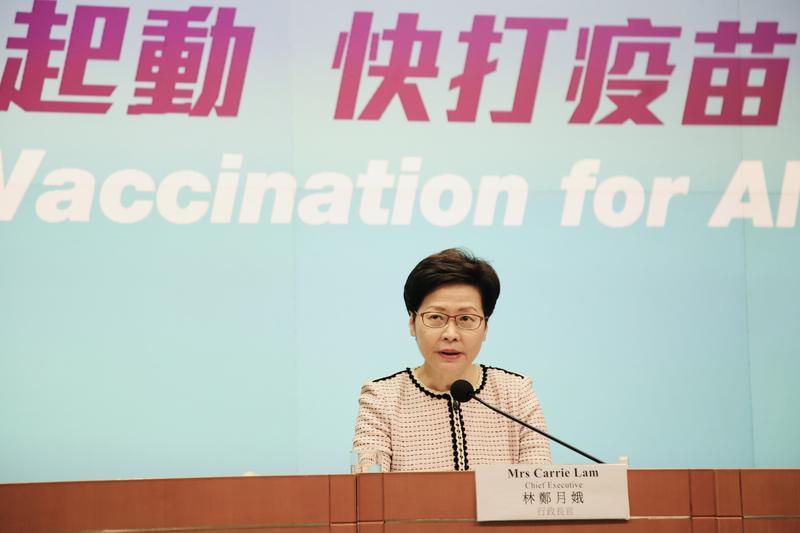 HONG KONG - Hong Kong will offer civil servants who get vaccinated against COVID-19 a day off for each dose, the government said on Monday.

Speaking at a press conference, Secretary for the Civil Service Patrick Nip Tak-kuen also called on private companies to offer similar incentives to ramp up the city’s inoculation drive.

“This new initiative of granting one day vaccination leave in the form of authorized absence per dose will be helpful to colleagues. It will enable them to have sufficient rest to recover from vaccination should there be any side effects,” Nip said.

Nip said more than 50,000 front-line civil servants have also been included in the vaccination drive which would enable them to get exempted from regular testing.

“They also have the responsibility to get vaccinated. Starting from today, over 50,000 front-line civil servants have been incorporated into our program, under which, if they get vaccinated, they can be exempted from regular testing. Otherwise, they will be required to undergo testing once every 14 days,” Nip said.

“So, with the incentives in place, I believe the vaccination rate among civil servants will go up,” he added.

Speaking at the same press conference, Chief Executive Carrie Lam Cheng Yuet-ngor also urged members of the public to get their jabs to protect against the possibility of a fifth wave of infections.

“It’s more than a jab because this is the lifeline of Hong Kong,” Lam said. “It will make Hong Kong capable of going out of this COVID-19 epidemic.”

Lam said that about 2.3 million residents of Hong Kong have been inoculated, with 1.36 million getting their first dose of the vaccine, accounting for 21 percent of residents above 16 years old. About another million residents have received their second dose, she added.

Lam said that she also signed this morning over a hundred letters to developers, shopping center owners, and chambers of commerce to appeal to them to help encourage their employees and members of the public to get vaccinated.

Lam lauded the businesses that earlier provided incentives to encourage vaccination. Major companies, restaurants, and even colleges have started offering cash payouts, extra time off, even the chance to win a US$1.4 million apartment.

Last week, the city’s international airport announced it would give away 60,000 flight tickets to people who got vaccinated before a September deadline. The Hong Kong Jockey Club, which runs racecourses and betting facilities, has offered up to three paid special leave days and additional insurance coverage for employees who get their shots.

Even regulators are getting involved. The Hong Kong Monetary Authority urged banks to give two days paid vaccination leave to their employees, local media reported on Monday. The HKMA confirmed that it made the request to facilitate immunizations.

“If we have a high vaccination rate, sufficient level of herd immunity, then businesses could go back to normal and travel can resume with the mainland and other parts of the world,” Lam said.

“So, I hope members of the public will realize that it’s not just taking two doses of vaccine. You are making a huge contribution to Hong Kong society,” she added.

The CHP said it was also investigating a preliminarily positive case involving a 35-year-old male police officer living at Wai Mei House, Yau Mei Court, Yau Tong. The officer was assigned at Wan Chai Police District Headquarters and Wan Chai Police Division at 1 Arsenal Street, Wan Chai, which will be included in the compulsory testing order to be issued today.

A total of 13 cases were reported from May 17 to 30 and all of them were imported, the CHP added.