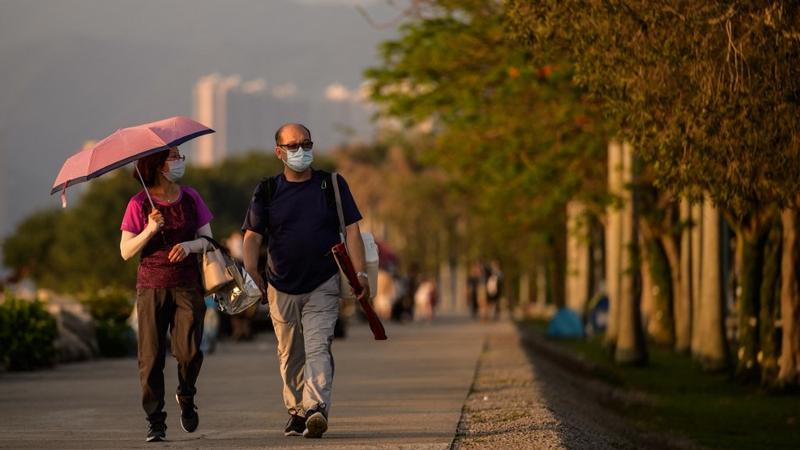 A couple walks along a path during sunset in Hong Kong on May 7, 2021. (ANTHONY WALLACE / AFP)

HONG KONG – For the first time in more than seven months, Hong Kong reported no new COVID-19 cases on Thursday.

In a statement issued on Thursday afternoon, the Centre for Health Protection said no new local or imported case was detected while the city’s tally stood at 11,836.

The Centre for Health Protection said no new local or imported case was detected while the city’s tally stood at 11,836

A total of 23 cases were reported from May 13 to 26, including five untraceable local infections, it added. The last time Hong Kong saw no new virus cases was on Oct, 14, 2020, after testing services were suspended when a tropical storm blew past the city.

Meanwhile, the CHP said that test results showed that a 61-year-old female nurse working in the Community Vaccination Centre at Kwun Chung Sports Centre actually had strain that was “compatible” with those found in vaccines and so she should not be considered as infected by COVID-19.

“Further genetic analysis conducted by the Department of Microbiology of the University of Hong Kong also suggested the same finding,” the CHP said.

"After examining the clinical, epidemiological and laboratory findings, this case will not be classified as a case of COVID-19 infection. Her close contacts will be released from quarantine centre if they obtain a negative test result,” it added.

A total of 31 confirmed patients were being treated as of Thursday in 13 public hospitals and the North Lantau Hospital Hong Kong Infection Control Centre, including one patient in critical condition and another one in serious condition, according to the Hospital Authority.