By Chai Hua in Shenzhen 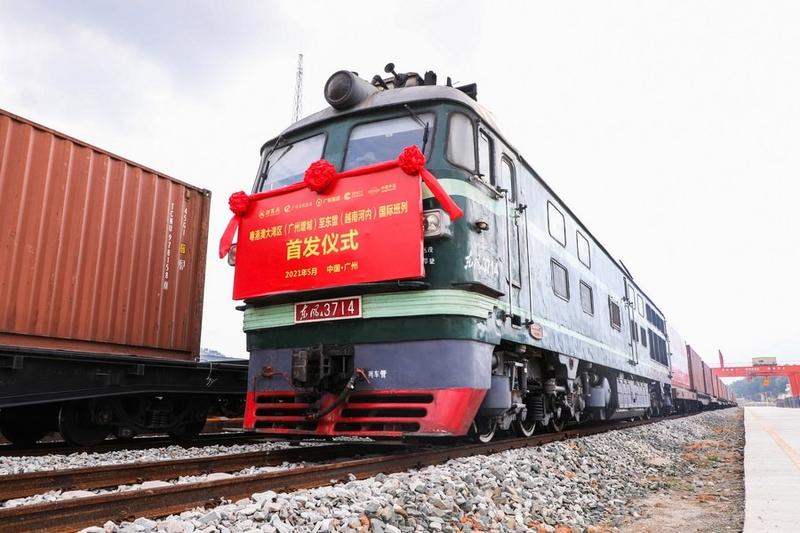 Photo provided by Sinotrans Ltd shows a freight train departing from Guangzhou, capital of south China's Guangdong province, which is bound for Hanoi, the Vietnamese capital, on May 25, 2021. (Xinhua)

The first freight train from the Guangdong-Hong Kong-Macao Greater Bay Area to an ASEAN country started on Tuesday night with 41 standard containers.

The trip began in Guangzhou, the capital of Guangdong province, and the train will reach its destination in the Vietnamese capital, Hanoi, in four days.

Railway freight has become the first choice for many domestic exporters because rail requires less contact with people and cargo — an important consideration during the brunt of the COVID-19 pandemic. Rail’s advantages of low cost and time-effectiveness compared with road and marine transportation also made it an attractive alternative.

Last year, more than 10 new railways were opened between Europe and the Greater Bay Area. This year, China-to-Europe freight trains from Guangzhou and Dongguan have increased to three times per week since January. After two trains a week were added from Shenzhen, the number of GBA-to-Europe trains reached a record high.

He said he believes delivering daily supplies through freight trains can effectively reduce the time loss and cargo damage of segmented transportation. Wei estimated it can save about 20 percent of the transportation cost compared with traditional transportation methods.

Shenzhen’s trade volume with ASEAN members surged by 18.2 percent to 160.1 billion yuan (US$25.04 billion) in the first four months, statistics from Shenzhen Customs showed on Monday.