Blinken says US to reopen consulate in East Jerusalem 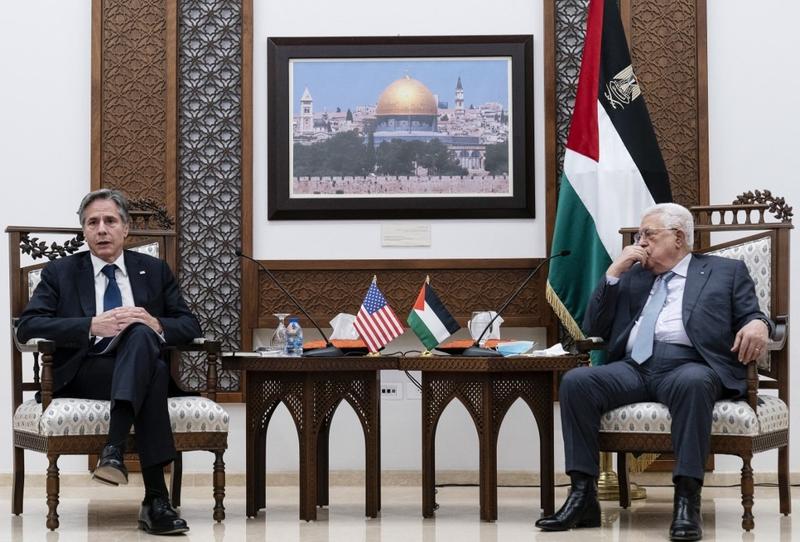 US Secretary of State Antony Blinken (left) and Palestinian president Mahmud Abbas give a joint statement, on May 25, 2021, at the Palestinian Authority headquarters in the West Bank city of Ramallah. (ALEX BRANDON / POOL / AFP)

RAMALLAH - US Secretary of State Antony Blinken announced on Tuesday that his country will go ahead with the process of reopening its consulate in East Jerusalem and strengthen its ties with the Palestinian Authority.

Blinken made the remarks after he met with Palestinian President Mahmoud Abbas in the West Bank city of Ramallah.

He said reopening the US Consulate General in Jerusalem would be "an important way for our country to engage with and provide support to the Palestinian people". He declined to provide a timeline for the reopening.

The US consulate in East Jerusalem was closed in late 2017 when former US president Donald Trump recognized the disputed holy city of Jerusalem as the capital of Israel.

The Palestinians regard East Jerusalem, occupied by Israel in the 1967 war, as the capital of their future independent Palestinian state.

Blinken also welcomed the Egyptian-brokered ceasefire deal that ended the 11-day conflict between Israel and the Palestinian militant groups in the Gaza Strip.

He said the US will provide US$75 million in development aid to Palestine, in addition to US$5 million in relief support and another US$2 million to the United Nations Relief and Works Agency for Palestine Refugees in the Near East (UNRWA).

Blinken reiterated that Washington intended to ensure that Hamas, which it regards as a terrorist organisation, did not benefit from the humanitarian aid.

At a press conference later in the day, Blinken also warned against actions by Israel or the Palestinians that risk inciting tensions or ultimately undermine the two-state solution to which he said Washington was still committed.

Such actions, he said, included Israeli settlement activity in occupied territory Palestinians seek for a state, possible Israeli evictions of Palestinians from East Jerusalem, and incitement to militant violence on the Palestinian side.

Palestinian President Mahmoud Abbas called on the US to exert pressure on the Israeli government to stop attacks against the Palestinians in East Jerusalem, particularly the al-Aqsa Mosque

For his part, Abbas thanked the US administration led by President Joe Biden for the efforts it had made in close cooperation with Egypt and the Arab and relevant parties to reach the ceasefire.

He said that "the ceasefire must include East Jerusalem and the West Bank, mainly stopping Israeli settlers' assaults and the Israeli occupation forces' attacks on the holy city of Jerusalem and on the Palestinian people."

ALSO READ: ICC says it has jurisdiction in Palestinian territories

Blinken began his regional visit in Jerusalem, where he held talks with Prime Minister Benjamin Netanyahu. The Israeli leader, speaking to reporters with the top US diplomat at his side, threatened a "very powerful response" if Hamas renewed cross-border rocket strikes.

Blinken will be in the region through Thursday, and will also travel to Egypt and Jordan.

In tandem with his visit, Israel allowed fuel, medicine and food earmarked for Gaza's private sector to enter the territory for the first time since the hostilities erupted on May 10.