Spotlight on heavyweights in Iran presidential race as vetting begins 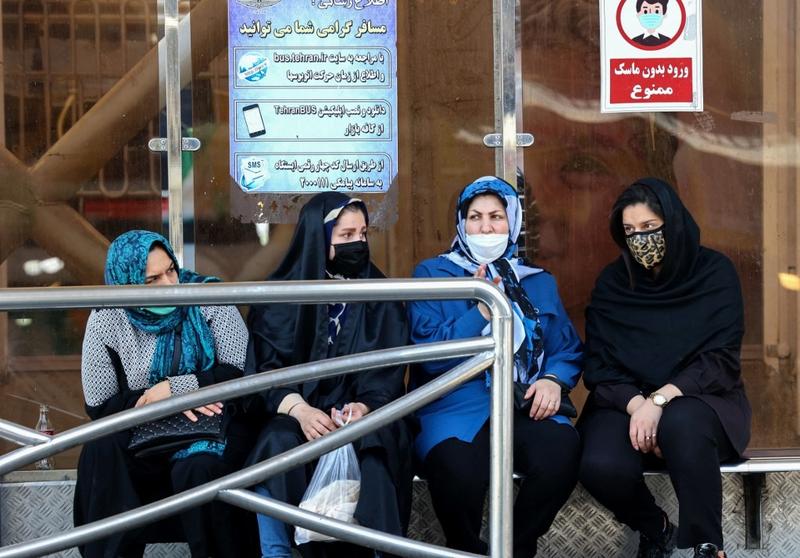 Iranian women wearing protective masks due to the COVID-19 pandemic wait at a bus station in Khorasan square in southern Tehran, on May 16, 2021. (ATTA KENARE / AFP)

TEHRAN - Iran's Constitutional Council, which supervises elections in the country, on Sunday started the process of vetting the large number of registered presidential hopefuls, of whom a few number would qualify, with heavyweights already in the spotlight.

As scheduled, the vetting body will release the names of qualified candidates by May 27. The nominees will have 20 days to campaign before the Election Day on June 18.

The five-day registration process ended on Saturday and 592 hopefuls signed up to officially enter the upcoming race.

Of the total number of the registered hopefuls, 552 are men and 40 are women, the official IRNA news agency quoted Jamal Orf, head of Iran's Elections Headquarters, as saying.

Of these potential candidates, four have run for presidency in the previous rounds, with the highest number of attempts belonging to Rezaei, this time being his fourth consecutive effort. The other three are Raisi, Jahangiri and Jalili.

Raisi and Jahangiri were presidential candidates in the 2017 election, where the former lost the race and the latter pulled out in favor of outgoing President Hassan Rouhani. Jalili's failed attempt was in 2013, when he also lost the race to Rouhani.

As with previous election cycles, several eccentric characters also signed up. A man said he has come to save humanity from going extinct in the next 20 years; a 74-year-old man claimed that if elected president, he would destroy all weapons of mass destruction in the world, and another man said he would dissolve the Foreign Ministry if elected, according to Mehr News Agency.

To exclude a large number of the individuals who register every four years as potential candidates with very basic or no qualifications, the Constitutional Council on May 5 approved an amendment to further clarify the criteria based on which it vets the potential candidates, according to the council's official website.

Analysts say that the main chances of winning the vote could be the number one choices of the principlist and reformist, the two main rival political camps in the country

Orf, who heads the Interior Ministry's election headquarters, said the lower number of registrants for this year's election compared to the previous votes has proven that the council's move to clarify the criteria has been effective in bringing greater rationality to the registration process' general atmosphere, the IRNA wrote.

In the 12th and 11th elections, the number of the registered hopefuls stood at 1,636 and 686, respectively, Orf said.

According to the amended criteria, hopefuls must be between 40 and 70 years of age, hold at least a master's degree or its equivalent, have a work experience of at least four years in managerial posts, and with no criminal record.

In addition, the country's top military commanders with the status of major general and higher are also allowed to run.

On Sunday, Abbas-Ali Kadkhodaee, spokesman for the Constitutional Council, said for the hopefuls to qualify as presidential candidates, they must secure at least seven votes in favor from the 12-member vetting body, the IRNA reported.

Analysts say that the main chances of winning the vote could be the number one choices of the principlist and reformist, the two main rival political camps in the country.

After putting his name down at the election headquarters, Raisi, the principlist camp' top candidate, said he has come to fight corruption, incompetence and aristocracy, and would be running as an "independent" candidate -- not a principlist, according to the IRNA.

He added he focused on the people's livelihood and problems, unemployment, high prices and the country's economic situation. In a tweet on Sunday, Raisi said interactions with all countries, particularly neighbors, will be his administration's main foreign policy if elected.

In an address to reporters following his registration, Jahangiri touched on the problems faced by Iran's people over the past few years, saying they need real breakthroughs in their lives

Jahangiri, the favorite potential candidate of the reformist political camp, is believed to be one of Raisi's main rivals on Election Day, a role previously thought to be played by Foreign Minister Mohammad Javad Zarif, who announced Wednesday that he would not sign up.

In an address to reporters following his registration, Jahangiri touched on the problems faced by Iran's people over the past few years, saying they need real breakthroughs in their lives.

He also stressed the need for the removal of US sanctions and stimulating sustainable economic growth with an eye on job creation and fairer redistribution of wealth, Tasnim News Agency wrote.

After registration, Larijani, a veteran politician who is seen as a key principlist figure, but has been tapped as a potential ally by both sides in recent months, said there is no magical key to the country's problems, and populist shows and pretending to be a superman fail to be the solution, calling for greater national solidarity and unity.

Larijani said that the main goal of the country's foreign policy is required to be facilitating foreign relations to accelerate economic development.

An analysis by Iranian news website asriran.com said Raisi has the highest chance of winning in the election, predicting that after the vetting process, the qualified principlist candidates will withdraw in his favor.

Larijani is believed to be able to secure votes by the proponents of both the principlists and reformists and an advocate of diplomacy and negotiations, the website added.