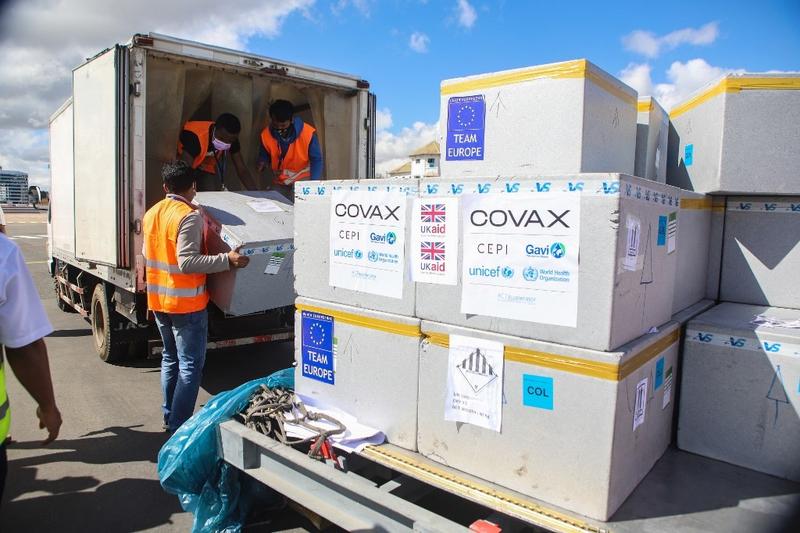 Workers load boxes of the Oxford-AstraZeneca COVID-19 vaccines, provided through the COVAX program, into a truck after they arrived by plane at the Ivato International Airport in Antananarivo, Madagascar, on May 8, 2021. (MAMYRAEL / AFP)

The campaign to deliver COVID-19 vaccines to vast parts of the world is grappling with a significant supply shortage, leaving many nations vulnerable and piling pressure on wealthy governments to share doses.

The initiative known as COVAX expects the shortfall to reach about 190 million doses next month, UNICEF, one of its partners, said on Monday. COVAX has shipped less than 40 percent of the doses it had intended to distribute by now, hurt by delays in supplies from hard-hit India, a global hub of vaccine production.

We have issued repeated warnings of the risks of letting down our guard and leaving low- and middle-income countries without equitable access to vaccines, diagnostics and therapeutics.

The urgency is growing in nearby countries like Nepal and Sri Lanka, as well as in nations in Latin America and beyond. World Health Organization Director-General Tedros Adhanom Ghebreyesus warned last week of the risks of “trickle-down vaccination” in battling the deadly virus, estimating only 0.3 percent of vaccines are reaching low-income countries.

The US, Britain and others, meanwhile, are racing ahead with their immunization drives. A group of wealthy governments could donate about 150 million doses if they shared 20 percent of their available supplies over the months of June, July and August, UNICEF found, citing data from Airfinity Ltd., a London-based research organization. They could do so while meeting commitments to vaccinate their own populations, the agency said.

“We have issued repeated warnings of the risks of letting down our guard and leaving low- and middle-income countries without equitable access to vaccines, diagnostics and therapeutics,” UNICEF Executive Director Henrietta Fore wrote in a statement. “We are concerned that the deadly spike in India is a precursor to what will happen if those warnings remain unheeded.”

COVAX deliveries will hit 65 million doses in the coming days, but it should have been at least 170 million, she said. Soaring demand in India has meant that 140 million doses intended for distribution to low- and middle-income countries through the end of May cannot be accessed by COVAX, while an additional 50 million doses are likely to be missed in June, UNICEF said.

The rollout is also behind schedule because of vaccine nationalism, limited production capacity and a lack of funding, it said.

An independent review of the international COVID-19 response last week called on Group of Seven (G7) countries to commit 60 percent of the US$19 billion needed this year to fund the effort known as the Access to COVID-19 Tools Accelerator. The report also urged high-income nations to provide more than 2 billion vaccine doses to poorer regions by the middle of 2022.