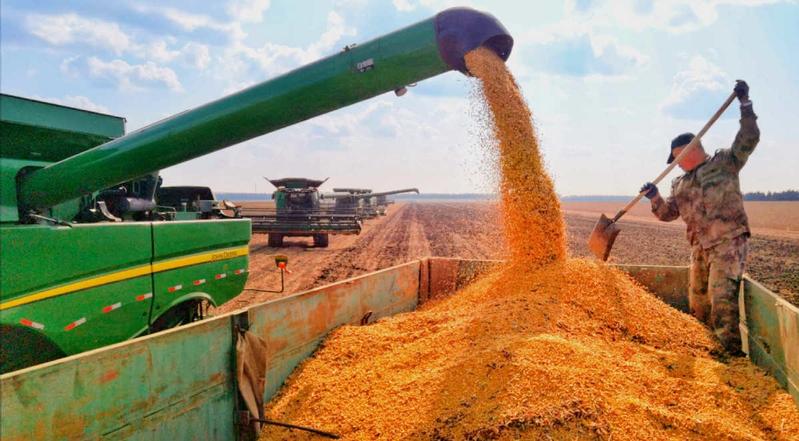 Farmers at the Jianshan Farm in Heihe, Heilongjiang province, harvest soybean with the help of reaping machines. (WU SHUJIANG / FOR CHINA DAILY)

After he had completed the busy spring plowing season, Jia Bingpeng began looking forward to another bumper harvest.

The 50-year-old has worked his land at Puyang Farm of the Beidahuang Agricultural Reclamation Group, a State-owned enterprise in the northeastern province of Heilongjiang, for more than 30 years.

"Last year, the profit from my 13 hectares of rice was 170,000 yuan (US$26,400)," he said. "With the help of modern agricultural technology and machinery, such as unmanned rice planters, I believe I will see high-quality rice and high yields this autumn."

"Beidahuang" originally referred to a fertile region, including the Sanjiang Plain along the Heilong and Nenjiang rivers, in a large wasteland in the north of Heilongjiang.

In 1947, before the founding of the People's Republic of China, a group of military cadres from Yan'an and nearby Nanniwan in Shaanxi province, led their troops to Beidahuang to develop what would become the first State-owned farms.

On Jan 24, 1958, the central government approved a directive mobilizing 100,000 veterans to participate in the further building of Beidahuang, receiving a strong response from across the country.

"At that time, Beidahuang had been developing for more than 10 years and 54 farms had been founded," said Zhao Guochun, former director of the Beidahuang Museum in Harbin, Heilongjiang's capital. "The 100,000 veterans who came to Beidahuang were an important source of labor and played an inestimable role in economic construction." 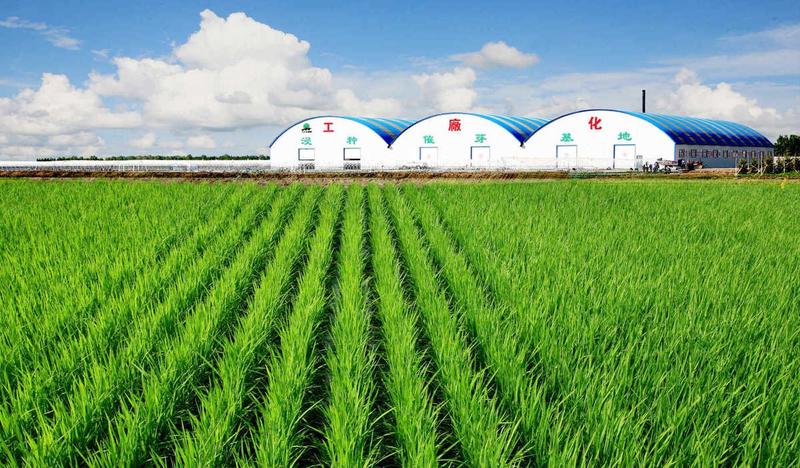 Drones are used to dust crops in Heilongjiang. (PHOTO PROVIDED TO CHINA DAILY)

In the decades that followed, about 1 million "educated youths", who had been sent to the countryside to learn from the farmers, came to the region to help, often enduring great difficulties.

"The soaring increase in the population brought an unprecedented shortage of food, housing and daily supplies," said Guan Liangliang, a museum staff member.

"The veterans cut tree branches and used them to build simple dwellings from mud."

On rainy days, such dwellings provided poor protection from the weather. Now, the word used to describe the huts－majiazi－has come to symbolize Beidahuang's spirit of hard work.

Around 50,000 young people, some age 20 or younger, lost their lives at Beidahuang, according to the museum.

After generations of effort and sacrifice, Beidahuang has seen rapid rises in annual grain output, from 2,400 metric tons at the beginning of the construction period to 21.5 million tons last year. 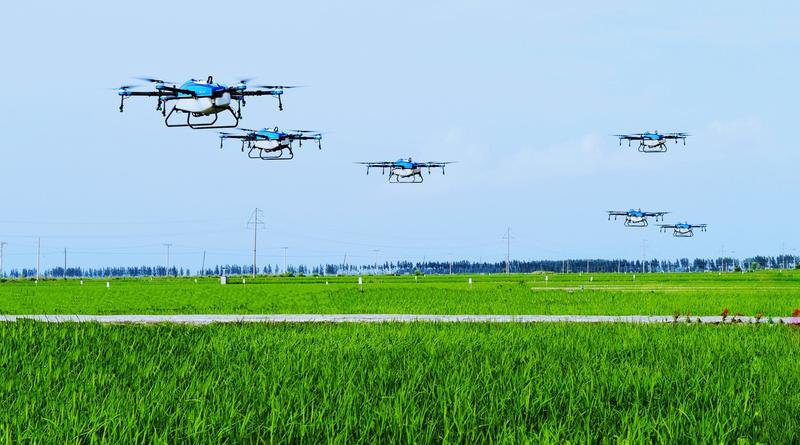 Seedlings of high-quality rice are grown at a farm in Heilongjiang. (PHOTO PROVIDED TO CHINA DAILY)

In recent years, Beidahuang has increased investment in science and technology, transitioning from traditional agriculture to a modern, "intelligent" sector.

Beidahuang has achieved a 99 percent agricultural mechanization rate on its 3 million hectares of arable land and is making increasing use of high technology.

During a visit to the group's Qixing Farm in September 2018, President Xi Jinping stressed the importance of ensuring China's food security so that the country can always control its own supplies.

Agriculture is a fundamental sector, and China's modernization cannot be achieved without agricultural modernization. Vitalization of agriculture should rely on science and technology as well as talent, he said.

"Qixing is the first farm in the Beidahuang Group to use the platform. Digital agricultural services will make production more intelligent and reduce the production and market risks for family farms," Han Tianjia, the group's deputy director, said.

"We have 43,800 agricultural machines, and the agricultural mechanization rate has reached 99 percent. Rice production has been fully mechanized."