Western lies about Xinjiang are doomed to infamy 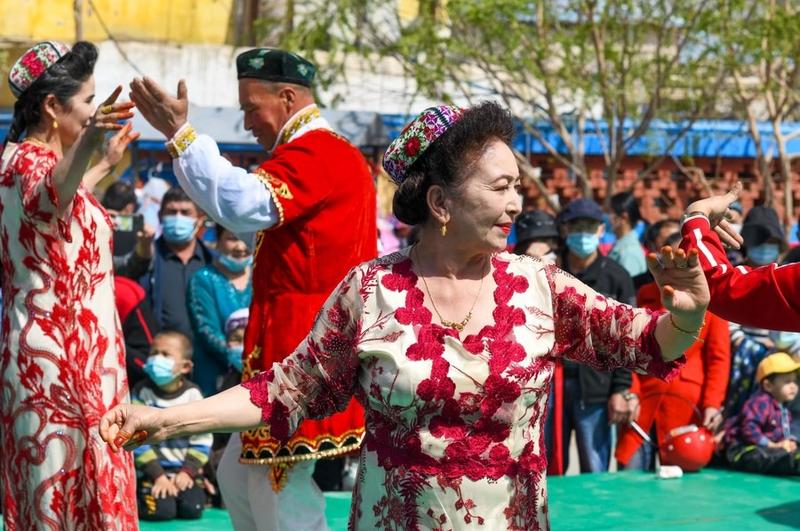 As the Western lies and false accusations against China on Uygurs are gradually excoriated, the iniquitous machinations of some Western powers and their compliant media to contain China’s rise and disrupt China-Islamic cooperation are condemned and doomed to disgrace.

Due to their vested interest, the United States and some allies and much of their mainstream media seem keen in ignoring facts and falsely accusing China's poverty relief and anti-terrorism policies in the Xinjiang Uygur autonomous region, trying to drive wedges into growing social and economic cooperation with the Islamic world.

The US interest in the fate of the Uyghur people is not motivated by the protection of human rights, but rather geopolitics, as its anxiety grows seeing China is increasingly welcomed across the world.

As was spoken out by Lawrence Wilkerson, former chief of staff to former Secretary of State Colin Powell at the Ron Paul Institute in August 2018, “The CIA would want to destabilize China and that would be the best way to do it to foment unrest and to join with those Uygurs in pushing the Han Chinese in Beijing from internal places rather than external."

Wilkerson’s revelation was further evidenced by Sibel Edmonds, former FBI translator on another occasion and backed by funding of Uygur-related anti-China organizations and activities over the past decade by US agencies related to CIA and the US Department of State.

In recent months, parliaments and politicians of the US, the United Kingdom, Australia and Canada suddenly and in a well-orchestrated manner flared their care for human rights of Muslims in China and rushed to bite Western media misinformation of so-called “genocide”, “forced labor”, “concentration camp” in Xinjiang. They even promoted ban of use of cotton from Xinjiang, the world’s fifth largest cotton base.

Though the Western world seems to be looking at Xinjiang from a wrong point of view assumed by US and UK media, more truth finders are exposing their smearing.

Some Western media have lost their morality and objectivity in falsifying and fanning lies. As was recounted by China Watch Institute in its report titled "Things to Know about All the Lies on Xinjiang: How Have They Come About?", anti-China forces in the West have developed a routine for manufacturing and peddling lies and rumors to attack China.

Rumors are first packaged as information leaked by "scholars" and "victims", which are then hyped up by media, and followed by official intervention. With this routine, "witness accounts" and "reports" emerge one after another, "directors" and "actors" come on stage in various disguises.

Just as some Western academic experts and journalists from the US, France, Australia, Sweden, Norway pointed out, the empirical basis for some US think tanks accusing China of "genocide" and others is surprisingly weak. This is proved by latest statistics that Uygur population growth is at least eight times faster than the rate of Han people in Xinjiang from 2010 to 2020. Whoever claim such population growth is of “genocide” is either blind or playing evil.

In fact, as the aforementioned academics emphasized, the US interest in the fate of the Uyghur people is not motivated by the protection of human rights, but rather geopolitics, as its anxiety grows seeing China is increasingly welcomed across the world.

The US claims that it cares about the human rights of Muslims and has banned several high ranking Chinese officials in Xinjiang and sheltered deviant Uygur activists, but it is the US that led to the deaths of more Muslims and induced more misery than any other country in the world.

It is the US that led invasion into the Islamic world – Iraq and Afghanistan among others – and caused devastation to a dozen Muslim countries in the name of human rights protection or counterterrorism. While hundreds of thousands of Muslim civilians were massacred at home, at mosques, outside schools and offices in US-initiated wars, millions were displaced from Afghanistan, Iraq, Syria and Libya among others and more are driven to extreme conditions.

China, however, has been supporting sustainable development of the Islamic world via the Belt and Road Initiative mainly, bringing local people investment and real benefits with no empty slogans and stringed conditions.

Chinese efforts are also underway to reduce tension within the Islamic world and as a gesture of good will, Chinese Foreign Minister Wang Yi visited six countries in the Middle East in late March, met some ASEAN officials in April, and hosted talks with Kazakh, Kyrgyz, Tajik, Turkmen and Uzebek counterparts in May.

The Chinese government has invited Muslim scholars, rulers and leaders of major religious political parties to observe Xinjiang in person, after regular visits of diplomats of SCO’s members. China has also welcomed Western experts, officials and religious scholars to Xinjiang to see and learn about the truth.

I’ve been to Xinjiang, interacted with various peoples from different walks of life during recent decades and witnessed to the growing socio-economic developments.

In Xinjiang, all people of about 40 ethnic groups, including the Uygurs, the Uzbeks, the Kazaks, have the right to a better life through work, and the Chinese government has gathered strength of the whole nation to help local Muslims in getting education, jobs and making a better life, and succeeded in lifting all out of poverty that bothered them for centuries.

The Chinese government should have won applauds instead of false accusations.

READ MORE: China will not acquiesce to any attempt to destabilize Xinjiang

If the US and its allies really care about Uygurs and other Muslims, they should support Xinjiang’s cotton growers, cease attacking Muslim homes with drones and smart bombs, stop arming some Islamic groups against sovereign authorities and others, and cancel funding for NGOs in smearing and destabilizing campaigns.

The US and some allies should also truly repent on the crimes they committed, punish crime perpetrators, and make amends for past wrongs by helping Islamic world build up economy and livelihood.

Just by smearing against China with one Uygur issue after another, the US, UK and Canada are pinning themselves onto a history of infamy. Justice that prevails will make China stronger.