The figure was up 14.1 percent from the level in 2019, bringing the average growth for the past two years to 6.8 percent, NBS data showed.

In the first four months, industrial output went up 20.3 percent year-on-year, resulting in an average two-year growth of 7 percent.

ALSO READ: Why economic growth this year will likely be high

The industrial output is used to measure the activity of designated large enterprises with an annual business turnover of at least 20 million yuan (about US$3.11 million).

Looking forward, the foundation for China's economic recovery in the second half of this year remains solid as both domestic and external demand bounce back, NBS spokesperson Fu Linghui said.

Fixed-asset investment amounted to 14.38 trillion yuan (about US$2.24 trillion) in that period, according to the NBS.

The double-digit growth was driven by a low base of comparison early last year when COVID-19 paralyzed economic activities in China. Compared with the 2019 level, the growth in fixed-asset investment came in at 8 percent during the Jan-April period.

Investment by the state sector went up 18.6 percent during that period, while private-sector investment rose 21 percent.

On a month-on-month basis, fixed-asset investment rose 1.49 percent in April.

Retail sales up 29.6% during Jan-April

China's retail sales of consumer goods went up 29.6 percent year-on-year in the first four months of this year, the NBS said.

The growth reversed from declines seen in the first four months last year, when consumer spending was disrupted by the COVID-19 pandemic.

The average Jan-April growth for the past two years stood at 4.2 percent, the NBS said.

In April, retail sales surged 17.7 percent year-on-year and was 8.8 percent higher from the 2019 level. The two-year average growth was 4.3 percent.

The retail sales of most categories kept positive growth. Of the total, the average two-year growth of 10 categories including sports and recreational goods, gold, silver and jewellery, and telecommunication equipment exceeded 10 percent.

The catering industry reported a 67.7-percent year-on-year increase in revenue in the first four months, as the hardest-hit sector continued to recover from the COVID-19 disruptions. 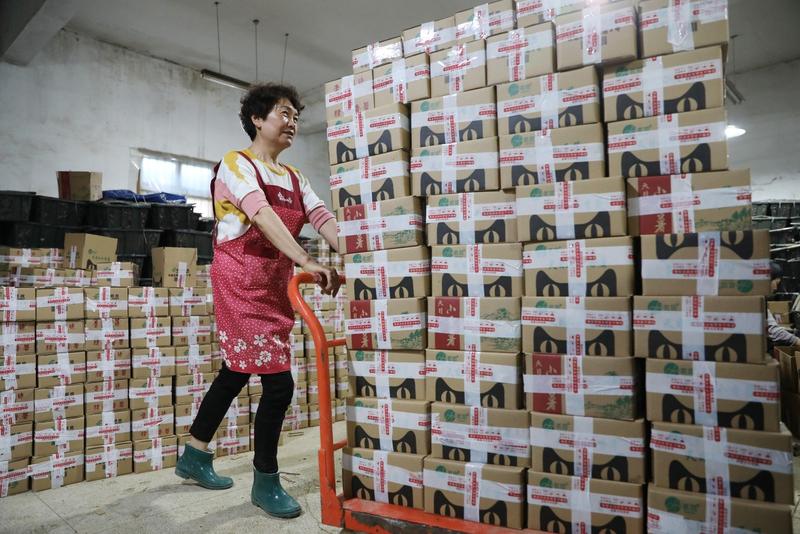 This undated photo captures an employee loading cartons of bamboo shoots onto a truck for shipment at an e-commerce company in Hangzhou, Zhejiang province. (HU JIANHUAN / FOR CHINA DAILY)

Online sales of physical commodities went up 23.1 percent year-on-year, accounting for 22.2 percent of total retail sales during the same period.

China's investment in property development rose 21.6 percent year-on-year in the first four months of this year, according to the NBS data.

Compared with the 2019 level, property investment went up 17.6 percent during the Jan-April period, NBS data showed.

Investment in residential buildings gained 24.4 percent year-on-year in the first four months, according to the NBS.

The property development climate index compiled by the NBS last month came in at 101.27 points.

Home prices slightly up in April

New home prices in four first-tier cities - Beijing, Shanghai, Shenzhen and Guangzhou - rose 0.6 percent month-on-month in April, compared with a 0.4-percent increase registered in March, according to the data.

New home prices in first-tier cities rose 5.8 percent in April while those in second-tier cities went up 4.9 percent

Prices of resale homes in second-tier cities saw a 0.5-percent month-on-month increase, while those in third-tier cities climbed 0.3 percent.

New home prices in first-tier cities rose 5.8 percent in April, up from 5.2-percent growth in March, while those in second-tier cities went up 4.9 percent, up from a 4.8-percent expansion in the previous month.

The resale home prices in first-tier cities grew 11.3 percent from a year earlier, narrowing 0.1 percentage points from the growth in March.

Compared with March, the April figure was 0.2 percentage points lower, said the NBS. A total of 4.37 million new urban jobs were created in the first four months.

The surveyed unemployment rate among those aged between 25 and 59, the majority of the labor market, stood at 4.6 percent last month.

Meanwhile, the surveyed unemployment rate in 31 major cities was 5.2 percent in April, 0.1 percentage points lower than that of March, according to the NBS.

The surveyed urban unemployment rate is calculated based on the number of unemployed people who have participated in the employment survey in urban areas.