Stories for women, by women 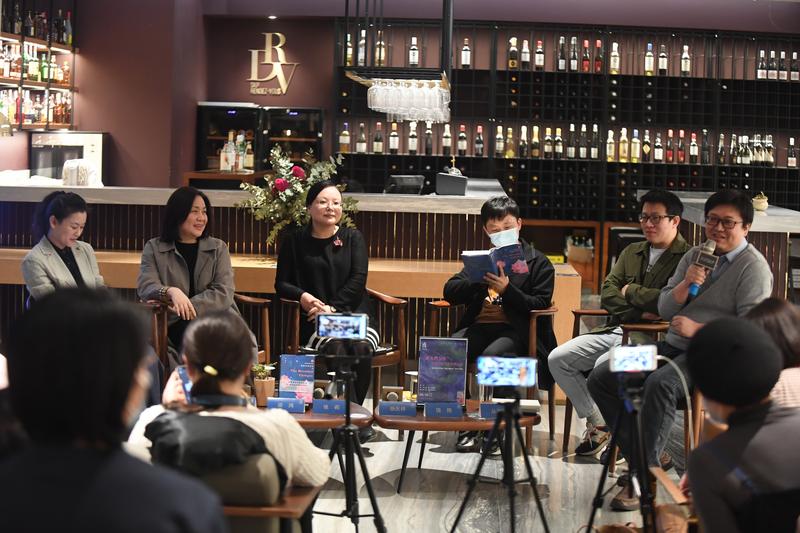 Zhang Li (facing, third from left) and other guest speakers discuss Chinese women's writing in recent years at the book launch ceremony of The Beautiful Changes at a bookstore in Beijing in April. (PHOTO PROVIDED TO CHINA DAILY)

The golden age for women in Chinese literature has arrived. Over the last year, there has been an increase in the publication of women's literary works. Readers can find anthologies of short stories by Chinese women, special issues of literature magazines devoted to essays by Chinese women, and seasonal reading lists on stories by women both online and in bookstores, along with seminars and dialogues discussing their work.

In celebration of International Women's Day in March, two anthologies of stories by women were published. Both collections were edited by Zhang Li, a Chinese literature professor with Beijing Normal University.

One is An Anthology of Short Stories by Chinese Women in 2020, and the other one The Beautiful Changes, is a collection of novellas, short stories, nonfiction and poems by women as well as a manuscript of a dialogue between two female literary professors discussing Chinese feminist writings and gender culture of the past 40 years.

"Over the last century, Chinese literature keeps on changing, and both the spiritual temperament and looks of women have changed greatly-either in literary works or in reality," writes Zhang in the preface of The Beautiful Changes. The title is inspired by the poem of the same title by poet Richard Wilbur. "The standards that define women's beauty and great women's writing have also gradually changed."

In Zhang's 2019 analysis of the gender awareness of writers, she found that Chinese women's literary works have been associated with their personal experiences, especially sex, or described as middle-class since the 1990s. So nowadays, many female writers have been trying to shun the tag of feminist writer.

However, Zhang says she has seen a change since last year's special issue on new women's writing in the magazine, October. Now more female writers are willing to wear the feminist tag during media events organized by publishing houses.

"Lately you can see that more female writers talk about their creations as women at ease in the media," she says.

In a dialogue between Zhang and He Guimei, a Chinese literature professor with Peking University, in March last year, the two female scholars gave their own definition of new women's writing, which is also the theme for The Beautiful Changes.

"It emphasizes the writers' social gender, putting women and femininity in social relations to observe and understand, rather than extracting them from context," writes Zhang in the preface of The Beautiful Changes. "It realizes that the discrepancies between the stance of the two genders are actually decided by differences in ethnicity, classes, economy and culture. It is also concerned with the differences in the stance among women that are a result of the differences in classes and nationalities."

Zhang writes that new women's writing emphasizes on the quality of being artistic and avant-garde, keeping away from histrionic, accusatory and victim mentality. 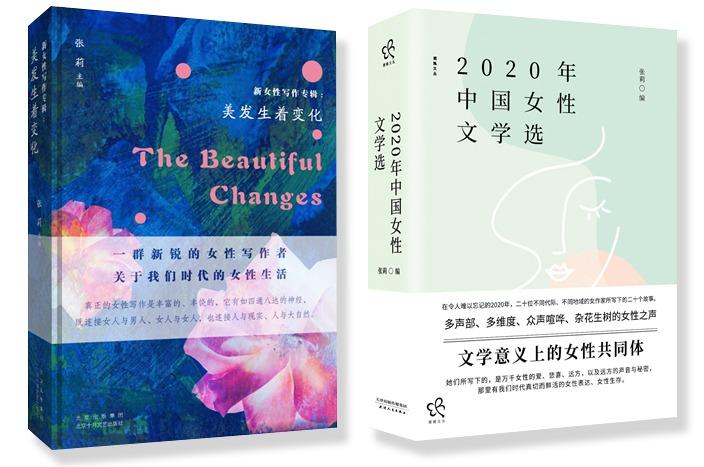 The Beautiful Changes (left) and An Anthology of Short Stories by Chinese Women in 2020 (right) are two recent anthologies of stories by women. (PHOTO PROVIDED TO CHINA DAILY)

If women are depicted as victims in fictional works, they might attract much attention. And in the long run, they cannot be real artistic pieces. So ideally, Zhang says women's works should reflect the complex reality, rather than simply portraying women as victims of the patriarchal society.

Literary critic Rao Xiang says topics on gender have not been talked about much, but Zhang has been trying to shift people's attention back to it in the last two years.

Zhang says works from the collections faithfully represent the modern women in China from certain perspectives, in a complicated way that is not aimed to please the mass readers.

"The lives of Chinese women are worth writing about. If you look at the present Chinese society, you will see it is more proper to write about it from the perspective of women because women's lives and temperaments have changed much faster than those of men," Zhang says. "The changes of our time can all be reflected in women. However, Chinese writers in general are not sensitive enough to such changes, which is a great pity."

Just like the 2019 edition, An Anthology of Short Stories by Chinese Women in 2020 also contains 20 short stories divided into three themes-love, secret and beyond.

Though the works chosen for the anthologies should be excellent, Zhang says they guarantee that the works of four to five new writers for each anthology are chosen as well.

"Maybe there are imperfections in their writings but it doesn't matter. We want to encourage them," she says.

In the process of selecting stories, Zhang and her students try to cover as many topics as possible relating to the lives of women from different age groups, marital statuses, classes and regions.

One story from the collection is about a single woman who bought a robot with advanced artificial intelligence. Not only can the robot help her to buy the cheapest goods in the world, but it is also her knowledgeable and considerate companion.

"All my students voted for this story. It vividly reflects our current lifestyle, especially about online shopping, and there is also discussion and further exploration of the topic," Zhang says.

I Just Want to Sit Down by Zhang Tianyi is a story about sexual harassment that a female college student experienced on an extremely crowded train back home. Instead of fighting back, the young woman just sat quietly. After an exhausting journey of more than 20 hours on the crowded train without a seat, she just wanted to sit down.

"It's violence that occurs daily. The writer has managed to describe the complexity in it," Zhang says.

Also like the previous year, Zhang and her students chose 300 short stories from literary magazines and online platforms that are welcoming of new writers. The bigger challenge for them was to find four to five new writers for the anthology to avoid repetition of the 2019 edition.

"Since there are several literary magazines publishing special issues addressing women's writings, it'll be easier for us to select works for next year's anthology," she says.