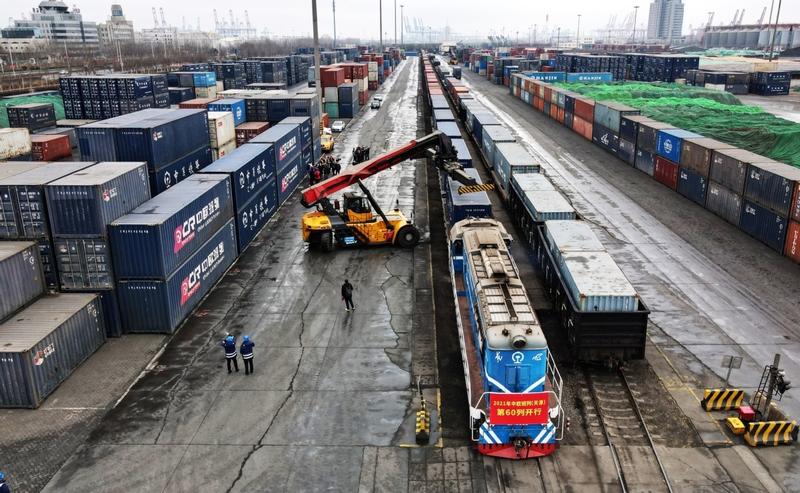 A crane loads containers onto a China-Europe freight train carrying automobiles, furniture and daily necessities before its departure from Tianjin on Feb 24. (Sun Lijun / China Daily)

The freight train service between China and Europe will continue to show its competitive edge over maritime and air transportation, and further enrich the cooperative content of the Belt and Road Initiative this year, experts and business leaders said.

The latest data showed freight train trips between China and Europe soared 70 percent on a yearly basis to 3,345 rides in the first quarter of this year.

The services and goods trade volume has risen since last year, and has highlighted several factors: China and its European partners' willingness to maintain smooth trade flows; their complementary trade structures; the gradual recovery of the European Union market; and China's well-developed industrial and supply chains

They carried 317,000 containers, up 79 percent year-on-year, according to China State Railway Group, the national railway operator.

Certain logistical difficulties, caused by COVID-19-related disruptions, were resolved in a timely way.

The transcontinental cargo train service has proved that it is no longer a supplement to secure the stability of supply chains between the two sides, said Feng Hao, a researcher at the Institute of Comprehensive Transportation, which is affiliated with the National Development and Reform Commission.

The services and goods trade volume has risen since last year, and has highlighted several factors: China and its European partners' willingness to maintain smooth trade flows; their complementary trade structures; the gradual recovery of the European Union market; and China's well-developed industrial and supply chains, he said.

Despite the pandemic in 2020, a record 12,400 freight train trips were made between China and Europe last year, up 50 percent on a yearly basis. They carried 1.14 million containers, up 56 percent from 2019, data from China State Railway Group showed.

Feng said the China-Europe freight train service, launched in 2011, is now considered to be a significant part of the BRI. The service has boosted trade between China and participating countries. It has encouraged more Chinese cities to open the new routes for freight train service to connect with other non-EU markets related to the initiative.

For instance, in early March, the Guangxi Zhuang autonomous region launched a new route of the China-Europe freight train service linking the region and Kazakhstan.

The newly opened route of 5,031 km connects Guangxi's capital Nanning and Kazakhstan's Nur-Sultan with a stop in Xi'an, capital of Northwest China's Shaanxi province, according to Nanning International Railway Port.

Before the route started operations, it used to take around 45 days for machinery made by manufacturers in Guangxi to arrive in Kazakhstan by road transportation. Now, a freight train on the new route takes only 13 days to accomplish the same task.

Zhou Sitong, a manager with China Railway Nanning Group Co Ltd, said the operation of this new route has great significance in promoting Nanning's role in the BRI's growth and driving the industrial development of surrounding areas.

"The Suez Canal blockage in late March has prompted Chinese companies to explore new transportation options to reach their clients. Excessive reliance on a single transport corridor could prove unreliable under certain circumstances," said Liang Ming, a researcher with the Chinese Academy of International Trade and Economic Cooperation.

Zhou Shihao, founder and CEO of YQNLink, a Shanghai-based global intelligent logistics platform, said daily inquires about the China-Europe freight train have nearly tripled over the past several weeks, reflecting rising concerns about uncertainties such as the shipping companies' limited service capacity and high freight cost.

"To secure enough storage space, it is common for our clients to make reservations between 20 days and one month in advance," said Kong Weidong, executive vice-president of the railway business unit of T.H.I.Group (Shanghai) Ltd, a freight forwarder.

The growth of the China-Europe freight train service has also promoted multimodal transport and boosted Chinese firms' investment in markets related to the BRI.

The commercial vehicles were first shipped by a car roll-off ship from Ningbo, Zhejiang province, to Dalian. It took 20 days to ship these cars to the rail terminal of the Berelast logistics center, which is located about 70 kilometers from Moscow's Red Square, saving between 15 and 20 days compared with ocean shipping service.

Operated by more than 100 employees and with 1.79 million square meters of land, the facility owns six 1,050-meter-long loading and unloading railroads, and 240,000-square-meter warehouse.

With container capacity reaching 750,000 twenty-foot equivalent units (TEUs), it can meet the demand of one-third of Moscow's container transit transportation.

Grishin Olegovich, the center's executive vice-president, said one of the facility's main tasks is to build a regional hub for the China-Europe freight train service and reduce its service blind spots in overseas sections.

Huo Guang, head of goods yard management of China Railway Shenyang Group, said before 2020, all the cargo trains departing from Shenyang and Dalian in Liaoning province for Europe used a locomotive with a speed of 80 kilometers per hour. The number of containers did not exceed 41.

"The trains today are all equipped with locomotives that can reach speeds of 120 kilometers per hour. Each of them typically carries 50 containers on the journey as demand for such a service remains high," he said.

China Railway Shenyang Group has operated 75 freight train services between China and Europe, and shipped 7,374 containers of goods to various European cities in the first quarter of this year, he said.

Despite rising demand, it is certainly not feasible for trains to replace maritime transport's major role in trade, said Dong Liwan, a professor of shipping and port services at Shanghai Maritime University.

He stressed that a large cargo ship can carry more than 20,000 standard containers. It would take a large number of trips by a cargo train to carry that amount of goods.

Moreover, underdeveloped facilities and limited manpower at some overseas terminals also affect the capacity of trains, he said.

To further accelerate the shipping efficiency of the China-Europe freight train service, the Urumqi Customs authority has cut the trains' release time from 3.5 hours to half-an-hour at land ports in the Xinjiang Uygur autonomous region, by using a new paperless system.

As a result, the efficiency of train traffic has been significantly raised, said Wang Jun, director-general of the Department of Port Control at the General Administration of Customs.

He said China will continue to deepen its cooperation with the parties concerned to promote the role of Authorized Economic Operator agreements and other policy tools in boosting trade activities between China and Europe via rail, help companies resolve issues in both export and import, and encourage more companies from economies related to the BRI to join AEO certification programs.

The program was advocated by the World Customs Organization for strengthening international supply chain security and facilitating movement of legitimate goods.

Under the program, Customs authorities from various regions form partnerships with the industry to collaboratively cut barriers to Customs procedures and enhance international trade efficiency.