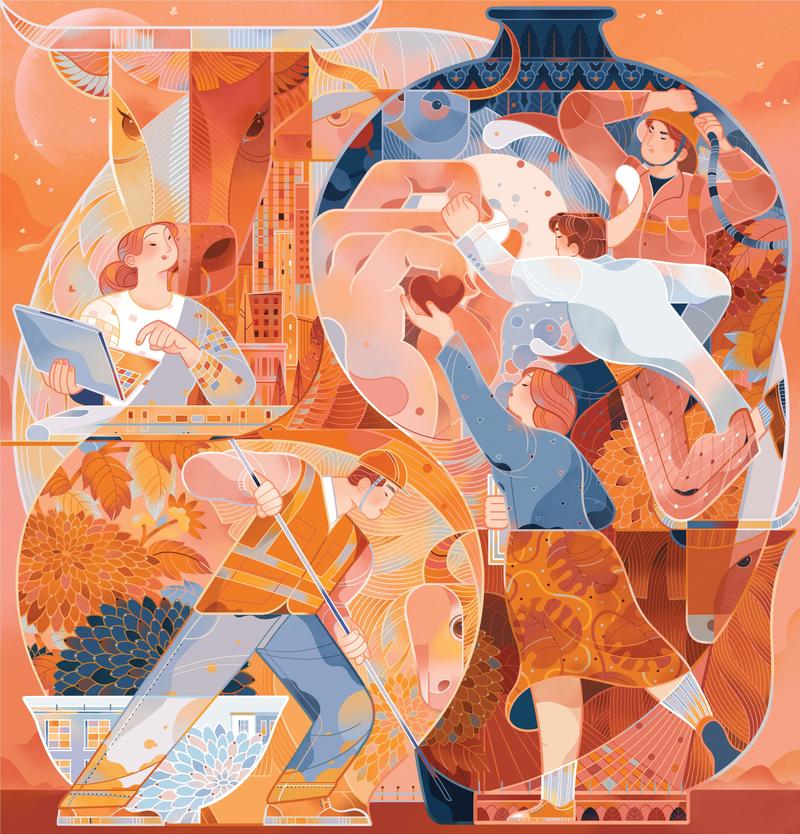 Wind power will play a crucial role as China strives to improve the proportion of renewables in its energy consumption mix amid high emission-reduction goals, according to analysts.

A record surge in new installations last year demonstrated the resilience of the wind power sector in the face of the coronavirus pandemic, they said.

This points to growth possibilities in coming years, helping China push its ambitious goal of achieving carbon neutrality before 2060, the analysts added.

At the end of last year, wind power accounted for 30 percent of the nation’s renewable power capacity.

The data surprised many global analysts.

Ben Backwell, CEO of the Global Wind Energy Council, or GWEC, said: “Wind companies and industry watchers reacted to the figures with a combination of surprise and awe.

“When annual global wind installations totaled just 39 GW in 2010, it would have been unfathomable to see this volume contributed by a single market,” he said.

China’s wind installation figures are “another testament to the resilience of the wind energy sector amid COVID-19, as well as the growth possibilities when scale and policy commitment are jointly applied”, Backwell said.

The Chinese Wind Energy Association, which is a GWEC member, estimates that 26.3 GW of the wind power installed by the end of 2019 was grid-connected last year, and this capacity was included in the NEA’s figures for 2020.

Even if that is subtracted from the 71.7 GW total it still leaves 45.4 GW which, Backwell said, is still a “monumental achievement” considering it is nearly equivalent to the entire global capacity installed in 2018 — and would still be a record year for the Chinese wind market.

According to GWEC Market Intelligence, the global wind industry is on track to go from strength to strength with similar installation levels this year.

The surge in growth was driven by an onshore wind feed-in tariff in China and a production tax credit in the US being phased out at the end of last year.

Companies rushed their installations before government subsidies and tax benefits ended for such projects. 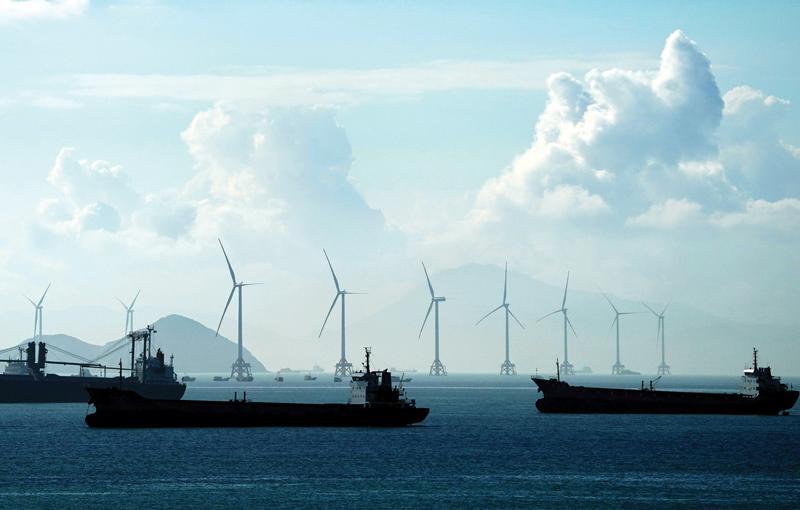 For China, wind power has become an integral part of its green energy mix and a key element in the country’s emissions goals.

In his virtual address to the United Nations General Assembly in September, President Xi Jinping announced that China would upgrade its nationally determined contributions, or NDCs, by targeting peak carbon dioxide emissions before 2030 with the aim of reaching carbon neutrality by 2060.

GWEC noted in its Global Wind Report 2021, which was released in March, that this pledge from the world’s second-largest economy and a leading carbon-emitting nation formed one of the key global milestones to tackling climate change since the 2015 Paris Agreement.

It said China’s net-zero target has since been followed by a series of ambitious commitments to “scale up wind and renewable energy capacity, with various ministries and provincial-level bodies now undertaking strategic measures for planning and implementation”.

China aims to increase wind and solar generation to 26 percent of power production by 2030. This could translate to some 1,600 GW of wind and solar capacity — exceeding the target of 1,200 GW by 2030 set in December.

According to NEA data, as of the end of last year, China had 281.5 GW of wind power capacity and 253.4 GW of solar generation capacity.

GWEC said in its report that both wind and solar “will be central to China’s power matrix”.

“Most top wind farm developers in China are State-owned companies, many of which have recently published goals for emissions peaking and renewable capacity,” the report said.

It quoted Qin Haiyan, secretary-general of the Chinese Wind Energy Association, as saying: “Although the COVID-19 pandemic impacted China’s wind industry early in 2020, the Chinese government took prompt and strong measures to effectively contain the virus.

“This allowed the sector to resume ‘business as usual’ manufacturing and installation activities as early as March 2020, which was crucial for the sector to complete projects with the looming subsidy deadline.”

To help smooth the way forward and play their part in helping achieve China’s net-zero target, grid companies took various measures to overcome bottlenecks and connect as many projects as possible before the end of last year, Qin said.

More than 400 Chinese wind power companies signed a “Beijing Declaration” at the end of last year. They committed to install more than 50 GW of new wind power capacity annually from this year to 2025, and more than 60 GW annually from 2026 onwards to help the nation reach its 2060 carbon neutrality target.

Analysts said the surge in wind power capacity last year, even in the face of a global pandemic, clearly shows that this level of deployment is possible in China. 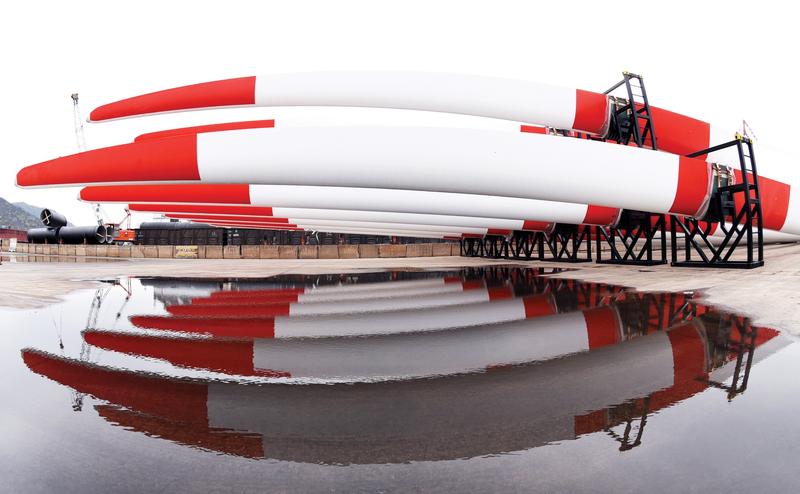 Wind blades made in China wait to be exported at the port in Lianyungang, Jiangsu province, in April this year. (GENG YUHE / FOR CHINA DAILY)

“With such significant achievement in the past decade, we expect wind power to play a more substantial role in the following decades,” Li added.

According to Wood Mackenzie, more than 2,000 GW of new wind capacity is needed from last year to 2060 to support China’s carbon-neutral target.

In its latest wind power outlook report released in March, the consultancy, which is based in the United Kingdom, expects 408 GW of new capacity to be added from this year to 2030, including 73 GW of offshore wind capacity.

Li said China’s 25 percent non-fossil fuel energy consumption target by 2030 would require a 40 percent renewable contribution to the power market. This will fuel wind capacity growth in the next decade.

Chinese wind turbine manufacturers have primarily remained in the domestic market, Li added. However, some Tier-1 original equipment manufacturers of turbines, including Goldwind, Envision and Mingyang, are attempting to enter overseas markets.

Cumulative capacity installed by Chinese turbine OEMs outside the country reached 4.2 GW at the end of last year; with primary demand in Southeast Asia, South America and Europe.

With the experience gained at home and the first forays made overseas, Tier-1 Chinese turbine OEMs “will be more active in developing the overseas market in following decades”, Li said.

The surge in wind farm growth across China and the US last year ousted Danish manufacturer Vestas from its position as the world’s biggest wind turbine maker for the first time in five years.

In the Bloomberg New Energy Finance 2020 ranking of global wind turbine manufacturers, seven of the top 10 were Chinese companies, with Goldwind in second place after the US conglomerate General Electric. Vestas finished in third place. The ratings are based on the total capacity of newly installed turbines.

The progress made by Chinese manufacturers can be attributed to the country’s strong growth in wind power capacity.

In December, President Xi said China would advance its total installed capacity of wind and solar power to more than 1.2 billion kilowatts by 2030. He outlined the goal during an address via video link to the UN-backed Climate Ambition Summit.

Du Xiangwan, an energy expert at the Chinese Academy of Engineering, said the country has the capacity to meet this target.

“Despite difficulties, China can realize the target … The country’s exploitable potential of wind and solar is much larger,” said Du, who is also honorary director of the National Expert Committee on Climate Change.

China has to develop only one-tenth of its potential wind and solar power capacity to reach the 2030 target for peaking carbon dioxide emissions, Du added.